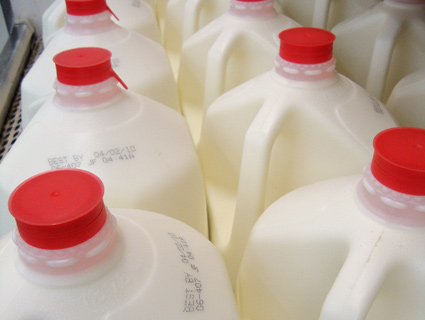 Admit it: When you see milk past the “sell by” date in your fridge you’re apt to skip the smell test and throw that stuff out. What you might not know is that the date is actually meant for store stockers to keep track of product rotation. It offers little indication of when the milk may actually sour. You wouldn’t be alone in tossing out perfectly good milk. Nine out of 10 Americans needlessly throw away edible, unspoiled food based on “use by,” “sell by,” and “best before” labels, according to a report released today by the Natural Resources Defense Council and Harvard Law School.

The average US household tosses about $450 worth of food each year because we think it’s past due.

The problem of wasted food is serious and multifaceted. As Kiera Butler reported earlier this week, a whopping one-third of the global food supply is wasted. Not only that, but this discarded food is responsible for 3.3 gigatons of greenhouse gas emissions. If food waste were a country, it would be the third worst carbon-emitting country on the planet after China and the United States, according to the UN’s Food and Agriculture Organization.

Here in America, we’re even worse: Roughly 40 percent of our food goes uneaten, amounting to an economic loss of $165 billion a year, the NRDC reported in 2012. The authors of this week’s analysis found that much of that waste is due to “misinterpretation” of the date labels.

“The average household is losing up to $450 on food each year because they don’t understand the labels,” said co-author Dana Gunders, an NRDC food & agriculture staff scientist, during a press call Wednesday morning. It’s a travesty, she added, especially when one in six Americans are “food insecure.” It’s also a terrific waste of human resources—think about all the time and energy that goes into harvesting, transporting, and processing those trashed foods. Eighty percent of our water, more than half of our land area, and 10 percent of our energy are consumed by agriculture.

The authors of the NRDC study, titled “The Dating Game,” place the blame on inconsistent and irrational labeling laws, which tend to be nonbinding: “This convoluted system is not achieving what date labeling was historically designed to do—provide indicators of freshness. Rather, this creates confusion and leads many consumers to believe, mistakenly, that date labels are signals of a food’s microbial safety. This unduly downplays the importance of more pertinent food safety indicators.”

The solution? A system of clear and consistent federally mandated labels for foods. Here are the authors’ three major recommendations:

1. Sell by dates, only meant as business-to-business information, should be made invisible to consumers; only useful labels that indicate when the food will likely spoil should be stamped on packaging. 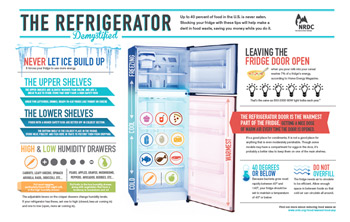 2. Government should mandate a clear set of labels for consumers, with unambiguous language that clearly distinguishes between dates for safety and dates for quality. For instance a ready-to-eat sandwich should indicate the date by which it should be eaten, with a label saying something like “unsafe to eat after.” Date labels should be removed from non-perishable goods and replaced with quality-based dates with more general information about when the product peaks in taste.

3. Date labels should be come with more information about safe food handling, including time and temperature exposure indicators. Ted Labuza, a co-author and food safety expert at the University of Minnesota, has argued for labels that indicate temperature changes of the product during shipping and handling.

But the authors say consumers also have a responsibility to reduce the amount of wasted food. They offer a handy infographic for demystifying your fridge with tips such as never letting ice build up in the freezer, and keeping the fridge temperature below 40 degrees Fahrenheit. Labuza said he has kept milk fresh at that temperature for up to six weeks.

Learning some of the tips that our grandparents used could be helpful too. For instance, this rule of thumb for eggs: If it sinks in a bowl of water, it’s good; if it floats, toss it out.*

Obviously, you want to toss anything that looks or smells rotten. In short, trust your senses, not the labels.

*Correction: An eagle-eyed reader noted that this adage was initially in the reverse order.