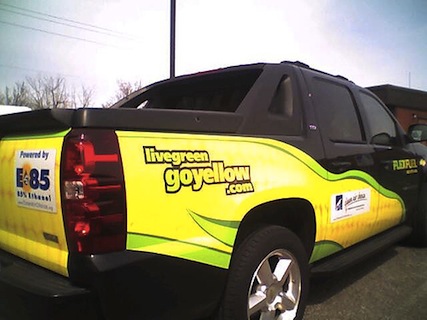 Amid much fanfare in 2007, Bush signed an energy law that mandated a large and annually increasing amount of corn-based ethanol be mixed into the nation’s car fuel supply. Six months or so later, a senator/presidential candidate named Barack Obama could be found jetting about on ethanol giant Archer Daniels Midland’s corporate airplane and appearing at the openings of new ethanol plants. And his administration has been promoting and defending the stuff ever since.

In their boosterism for corn ethanol, Obama and his predecessor were heeding a bi-partisan consensus that has propped up the industry since the 1970s. But now it’s wearing thin. In a document leaked in October, Obama’s Environmental Protection Agency revealed it was considering scaling back the amount of ethanol required to be mixed into the gasoline supply in 2014—which, until very recently, would have been an unthinkable affront to King Corn. And then, on Friday, the EPA formally proposed the cutback, and will now take public comment on it, “which is certain to be voluminous,” The New York Times dryly noted.

The reason for Obama’s apostasy on ethanol, as this Reuters piece explains, has to do with the nature of car engines. They’re designed to burn petroleum-based gas, and older models tend to get gummed up when the gasoline mix surpasses 10 percent ethanol, known as the “blend wall.” The mandates in George W. Bush’s 2007 energy law were based on the assumption that US gasoline consumption would rise indefinitely—meaning that you could mix ever-higher amounts of ethanol into the fuel supply with breaching the blend wall for years. But since the Great Recession and concurrent rise in mileage standards in new cars, US gasoline consumption has been shrinking, and the blend wall is upon is.

The lead-up to the EPA’s decision has inspired a frenzy of lobbying, The Wall Street Journal and Politico report. Here’s Politico on the battle lines:

On the pro-ethanol side: the renewable fuels industry, corn growers and many Midwestern lawmakers. On the anti-ethanol side: the oil industry, restaurant owners, livestock and poultry producers and, increasingly, a disenchanted environmental movement that no longer believes the plant-based fuel is a greener alternative to fossil fuels. In addition, a new generation of tea party Republicans — viscerally opposed to government mandates and fuel subsidies — has joined the fight against ethanol.

This is obviously an unsavory fight: King Corn vs. Big Oil and the tea party. But as this sprawling recent Associated Press exposé shows, the environmental case for corn-based ethanol is indeed bankrupt—as I (and many others) have been arguing for years. It turns out, as the AP report shows, that diverting crops into the fuel supply encourages the worst, most soil-abusing practices of US agriculture: monocropping, massive applications of agrichemicals (including dead zone-causing fertilizers), and the conversion of environmentally fragile land into intensive farming. Who wins from the government-mandated ethanol rush? Just as the firms that supply mining tools tend tend to benefit most from gold rushes, the companies that supply farmers agrichemicals are the main beneficiaries of a rigged-up ethanol boom.

When he enshrined the current ethanol boom into policy in 2007, President Bush declared it a “major step” toward “confronting global climate change.” That was a ludicrous statement then—and six years of woefully inadequate federal action on climate change have made it downright obscene. I’m with Big Oil and the tea party on this one.