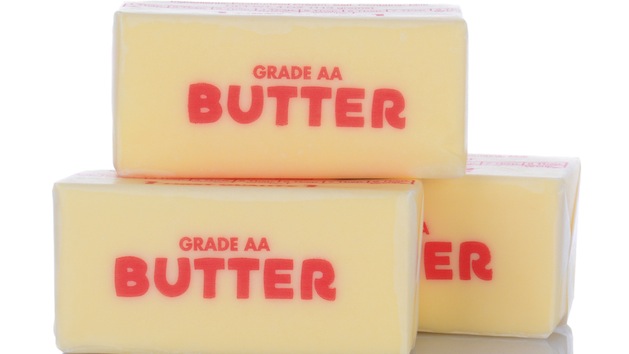 James McWilliams—a historian who has made a name for himself in prestigious publications like the New York Times and The Atlantic for his contrarian defenses of the food industry—is back at it. In an item published last week in the excellent Pacific Standard, McWilliams uses the controversy over a recent study of saturated fat as a club with which to pummel food industry critics like the Times‘ Mark Bittman.

Here’s what happened: A group including Harvard and Cambridge researchers analyzed 72 studies and concluded that there’s no clear evidence that ditching saturated fat (the kind found mainly in butter, eggs, and meat) for the monounsaturated and polyunsaturated kind (found in fish and a variety of vegetable oils) delivers health benefits.

Bittman responded to the study’s release with a Times item declaring that “butter is back.” His real point was more nuanced than that, though. The study’s conclusion “doesn’t mean you [should] abandon fruit for beef and cheese,” he wrote. Rather, he urged, “you [should] just abandon fake food for real food, and in that category of real food you can include good meat and dairy.”

After a 1977 decree by a US Senate committee that people should consume less saturated fat, the food industry began to promote sugar-laden, carbohydrate-rich products as “low fat” and thus healthy.

Not so fast, McWilliams countered. He pointed out, correctly, that the study turned out to have errors, which the authors had to correct. But even after the corrections, the study’s lead author stood by the overall findings, Science reported. Another one of the authors told Science that the study’s main problem was the way it was covered by media. “We are not saying the guidelines are wrong and people can eat as much saturated fat as they want,” he told Science. “We are saying that there is no strong support for the guidelines and we need more good trials.”

Of course, headline aside, Bittman didn’t fall into that trap. He merely urged his readers to accept some fat when they’re “looking for a few chunks of pork for a stew,” and to use real butter in place of “I Can’t Believe It’s Not Butter.” Indeed, Bittman’s call for moderation in eating animal products is long-standing—he’s the author of a book called Vegan Before Six and a longtime champion of the “Meatless Mondays” practice.

But McWilliams’ real beef (so to speak) ultimately didn’t involve the study itself, or the debate over fat’s place in our diets. Rather, it centered on Bittman’s critique of the food industry, which Bittman blamed for stoking the public’s fat phobia, and manipulating it to its own ends. McWilliams chides Bittman for the “disingenuousness of using a study on fat and heart health as grounds for condemning processed food,” and laments the “dubious manner in which processed foods are condemned.”

But he misses an important point: You can’t meaningfully debate the role of fat in our diets without looking hard at the way the food industry has manipulated the evolving scientific consensus around fat. On NPR last week, reporter Allison Aubrey showed how widespread fat phobia among the public gained traction from a 1977 decree by a US Senate committee that people should consume less saturated fat—which then got interpreted by the food industry as a license to promote sugar-laden, carbohydrate-rich products as “low fat” and thus healthy.

Simultaneously, as Bittman correctly noted, trans fats—cheap vegetable oils treated with hydrogen so that they remain solid at room temperature—emerged as the food industry’s butter substitute of choice for decades, providing the main substance for margarine. Based on relentless food industry marketing, generations of people grew up thinking trans-fat-laden margarine was healthier than butter—even after science definitively showed that it was much, much worse (a sorry tale I laid out here).

These fat-related marketing triumphs, quite profitable for the food industry, coincided with a surge in diet-related health troubles, including heightened obesity, diabetes, and metabolic-syndrome rates. Bittman is correct to discuss highly processed food in the context of the controversy over fat; and in trying to force it out of the conversation, McWilliams is playing his usual role: reasonable-sounding defender of a highly profitable but dysfunctional industry.