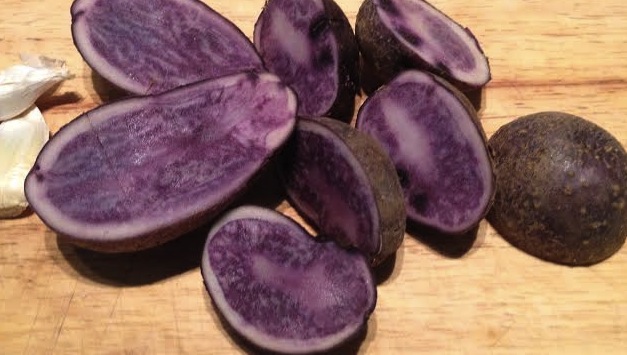 In the years I spent working on a small organic farm in North Carolina, we’d often spend the wee hours of the morning harvesting a variety of vegetables. One of my favorite crops to pick was potatoes, which required a kind of subterranean treasure hunt. One of us would plunge a pitchfork into the earth and upturn a potato plant, and another, on hands and knees, would quickly snatch the dirt-caked orbs dangling from the roots and place them in a bucket.

Occasionally, a potato would get “speared”—unintentionally stabbed by the fork—making it unmarketable. We’d separate them out, and march them into the kitchen for a post-harvest “second breakfast” of potatoes, just-laid eggs, and any other vegetables on hand. Early-morning harvests generated a fierce hunger, and nothing satisfied it quite like these just-dug treasures roasted in a hot oven—sweet, creamy, and sumptuous, justifying their name in French: pomme de terre, or apple of the earth.

Now when I go the the farmers market, I can never resist “new” potatoes, which are just potatoes that haven’t been stored long. Recently, at the stand of an excellent Austin farm called Green Gate, I spied some purple potatoes—which are not only rich in health-giving phytochemicals, but also deliver an extra dose of earthy flavor.  I grabbed a couple handfuls, came home, and tried to recapture that farmhouse magic.

Note: You can omit the eggs and just use the below recipe as a guide for roasting potatoes.

Adjust your oven’s top rack to between 6-8 inches below the broiler (you’ll be finishing the potatoes under the broiler). Turn the oven to 400 degrees F and insert a large cast-iron or other heavy-bottomed, over-proof skillet. Your going to want to cover it, so find an oven-proof cover that will work with the pan before proceeding.

Dab the chopped potatoes dry with a towel. When the oven comes to temperature, remove the skillet. Proceed with caution: It will be blisteringly hot. Add enough oil to cover the bottom, and drop in the potatoes along with a good pinch of salt. Using a spatula, toss the potatoes around in the pan until they are well-coated in oil. Cover the skillet and return it to the oven. The cover will help the potatoes cook faster by essentially steaming them in their own moisture.

While the potatoes are cooking, crack the eggs into a bowl, along with a pinch of salt and a grind of pepper, and whisk them together with a fork until the yolks and whites are just combined. 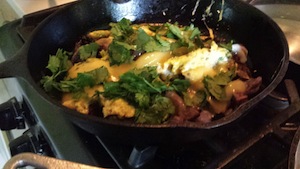 Check the potatoes every ten minutes or so by plunging a fork into one of the larger pieces. When the fork penetrates easily, it’s time to remove the skillet’s cover, turn off the oven’s bake function, and turn the broiler on to its highest setting. Place the skillet under the broiler and cooking, checking often, until they’re brown and crisp on one side. Flip them with a spatula, and brown/crisp them on the other.  Remove the skillet, placing it on the stove top. Turn off the broiler and shut the oven door.

Add the chopped shallots to the pan along with a small glug of oil, tossing it all with a spatula. The pan will still be sizzling hot, and will cook the shallots. When the sizzling has calmed down, turn the heat to low and carefully pour the mixed eggs over the potatoes, covering the skillet bottom with the eggs. When the edges have set, flip the eggs with a spatula. Lay the cheese slices onto the eggs, and return the skillet to the still-hot oven until the cheese has just melted—a couple of minutes.

Serve with a green salad, toast, and white wine for dinner, or tortillas and coffee for breakfast.