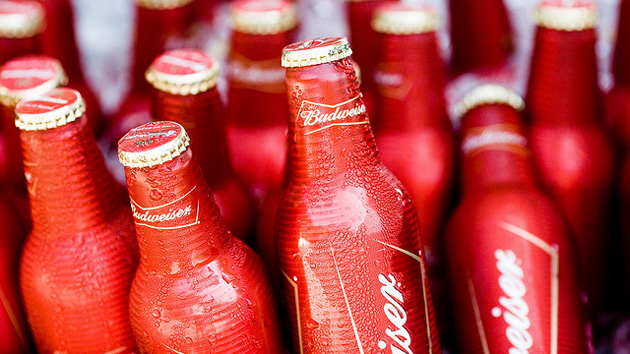 InBev and MillerCoors loom over the US beer landscape like…well, like one of those monstrous inflatable Bud Light bottles that spring up at certain football tailgate parties and outdoor concerts. Together, the two global giants own nearly 80 percent of the US beer market. InBev alone, corporate owner of Budweiser, spends a staggering $449 million on US advertising.

Meanwhile, independent breweries cranking out distinctive product—known as craft breweries—are undergoing an accelerating renaissance. “Sales of craft beers grew 16 percent in volume over the past year versus a 1.7 percent decline for the biggest U.S. beer brands,” Bloomberg reported in January. And new craft breweries are budding like hop flowers in spring. Here are the latest numbers, just out from the Brewer’s Association. Note that that the number of US craft brewers has nearly doubled since 2010, and grew 20 percent in the past year alone. 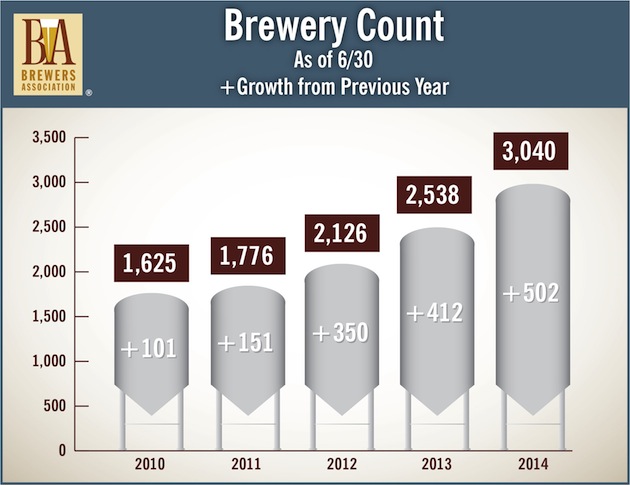 Now, here’s an historical look at the situation, a chart that I also included the last time I looked at the craft-beer revival, back in 2011. Note that the number of breweries plunged with the coming of Prohibition, surged with the onset of legalization in the 1930s, and then began a long, slow decline as the beer industry consolidated into the hands of giants like Budweiser, Coors, and Miller. By the end of the 1970s, the entire US beer market was being satisfied, if that’s the word, by fewer than 100 large brewing facilities.

And then, starting in the early ’80s—with the gradual demise of Prohibition-era restrictions like the one that kept breweries from selling beer directly to the public, as well as people’s growing distaste for watered-down swill—the craft-brew revival, the one reaching full flower today, emerged. 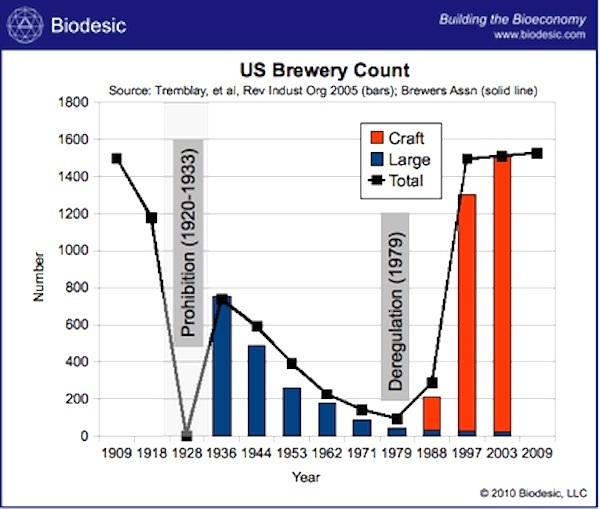 For its part, Big Beer has responded to the declining popularity of its goods in two ways. The first is relentless cost cutting. When Belgian mega-brewer InBev bought US corporate beer giant Bud in 2008, it very quickly slashed 1,400 jobs, about 6 percent of its US workforce. And the laser-like focus on slashing costs has continued, as this aptly titled 2012 BusinessWeek piece, “The Plot to Destroy America’s Beer,” shows.

The second is to roll out phony craft beers—brands like Shock Top and Blue Moon—and buy up legit craft brewers like Chicago’s Goose Island, which InBev did in 2011. Other ersatz “craft” beers include Leinenkugel, Killian’s, Batch 19, and Third Shift. The strategy has been successful, to a point. Bloomberg reports that InBev has seen its Goose Island and Shock Top sales surge.

But there’s a catch: These stealth Big Beer brands aren’t “putting the microbrewers who started the movement out of business,” Bloomberg reports. Rather, “the new labels are taking sales from already-troubled mass-market brands owned by the industry giants peddling these crafty brews.” In other words, consumers aren’t dropping Sierra Nevada or Dogfish Head and reaching for the Shock Top. Rather, Shock Top sales are being propped up by refugees from Bud Light and the like.

Meanwhile, the beer world is buzzing about what would be the granddaddy of all mergers: rumors are swirling that InBev is preparing a bid to takeover SABMiller, a move that would give the combined company 30 percent of the globe’s beer market. The motivation, reports the St. Louis Post Dispatch: “A-B InBev could reap $2 billion in cost-savings through an acquisition of their largest rival, through global procurement and shared services, and eliminating job redundancies.”

While Big Beer attempts to solve its problems with crafty marketing and yet more giantism, US craft brewers are trying out innovative business models. Big-name craft brewers Full Sail (Oregon), New Belgium (Colorado), and Harpoon (Boston) are all fully employee-owned. Here in Austin, Black Star Brewery and Pub is cooperatively owned by 3,000 community members and managed by a “workers assembly” as a “democratic self-managed workplace.” It may sound like it should be a cluster, but the place is always packed, the service is brisk, the food is good, and the beer is excellent. And the employees proudly refuse tips, citing their living wage as the reason. Meanwhile, a forthcoming worker-owned project, 4thTap Brewing Co-op, is creating excitement among Austin beer nerds with its promise to “bring radical brewing to the forefront of the Texas craft beer scene.”

For me, all of this ferment underlines an important point about the US food scene: It may be dominated by a few massive, heavily marketed companies at the top, but that doesn’t stop viable alternatives from bubbling from below.