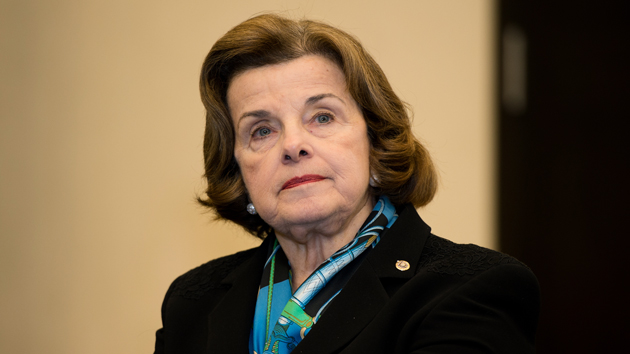 UPDATE: Sen. Dianne Feinstein has called off her backroom negotiations to push a California water bill through the current, lame-duck Congressional session, The Fresno Bee reported late Thursday afternoon. But she’s not finished trying to make a deal with Big Ag-aligned GOP reps. She vowed to “put together a first-day bill for the next Congress, and it can go through the regular order,” the Bee reported.

Sen. Dianne Feinstein (D-Calif.) is negotiating a behind-closed-doors deal with Republican lawmakers to pass a bill that would ostensibly address California’s drought—an effort that has uncorked a flood of criticism from environmental circles.

Feinstein’s quiet push for a compromise drought bill that’s palatable to Big Ag-aligned House Republicans has been in the works for six months, Kate Poole, a senior attorney with the Natural Resources Defense Council, told me. And it has accelerated recently, as the Senator hopes to pass it by year end, during the “lame duck” period of the outgoing Democratic-controlled Senate.

Feinstein spokesman Tom Mentzer wrote in an email that “draft language continues to be negotiated between House and Senate offices and nothing is final.” But he would divulge no other details—not even a timeline for when a broad outline of the controversial legislation might be released to the public.

The state’s high-powered farm interests, particularly those in the desert-like zones of the Central Valley’s southwestern corner, want to maximize their access to these federally controlled water flows. This is precisely the part of the Central Valley that’s in the midst of a huge expansion of water-intensive almond and pistachio orchards.

Environmental groups like NRDC, meanwhile, seek to ensure sufficient water for the ecologically fragile Sacramento-San Joaquin Delta, which lies at the heart of the Central Valley Project, at the confluence of the state’s two largest rivers. The US Fish and Wildlife Service lists 19 Delta-dwelling species as “endangered” or “threatened.” The most famous of the threatened fish is the tiny delta smelt, which is what scientists call an “indicator species,” meaning that their health serves as a barometer of the larger ecosystem’s robustness. The delta smelt occupies the base of the area’s food web, feeding on simple organisms like plankton and providing forage for larger fish.

Back in February, the Republican-controlled House passed a bill that would effectively end efforts to reserve substantial water for the Delta and permanently allocate more water to farmers. Central Valley-based Rep. Devin Nunes (R.-Calif.), a major champion of the bill, had sponsored similar bills before the current drought set in, only to see them languish, Poole says. This time, Nunes, along with the bill’s sponsor, freshman Central Valley-based Rep. David Valadao (R.-Calif.) “used the drought as an excuse to pass a bunch of wish-list rollbacks these guys have had for a while.”

The bill drew widespread derision from Democrats. Back in Sacramento, Gov. Brown condemned it, declaring it would “override state laws and protections, and mandate that certain water interests come out ahead of others.” President Obama vowed a veto if the bill made it to his desk, claiming “it would undermine years of collaboration between local, State, and Federal stakeholders to develop a sound water quality control plan for the Bay-Delta.”

Meanwhile, Feinstein went to work on a companion Senate “emergency drought” bill. The effort “started out not-so-bad,” Poole says. But then, as the sausage-making process went on, it started taking on more agribusiness-friendly provisions, she says—like one that would redirect water from refuges to agricultural water districts, and another that would allow water transfers to farms to occur during critical salmon migration months—despite  federal and state protections.

In May, over the fierce objections of environmental groups, Feinstein pushed her bill through the Senate by unanimous consent, avoiding a floor debate. The San Francisco Chronicle called it “the product of months of closed-door negotiations with various interests, including House Republicans…Bay Area Democrats, who voiced their concerns, and various stakeholders including farm groups.”

The House bill’s sponsors applauded, expressing confidence that the two chambers could “come up with a bill for the president to sign, so we can fix this problem.”

Soon after, Feinstein’s behind-the-scenes negotiations with those GOP lawmakers began. They never bore fruit, sidetracked by generalized partisan wrangling in the run-up to the November elections. But now that the election is over, Feinstein is pushing hard to ram a compromise through Congress in the lame-duck session. California’s senior senator isn’t the only one who refuses to reveal details of the effort. “We’ve taken our vow of secrecy,” Rep. Valadao, who sponsored the House bill, told McClatchy news service Tuesday. Meanwhile, Tom Birmingham, general manager of the Westlands Water District, arrived in Washington this week to weigh in on the deal, McClatchy reported. The nation’s largest water district, Westlands supplies irrigation water to more 1,000 square miles of ag-rich, water-poor farmland in the southern Central Valley.

Environmentalists, stung by the lack of transparency, fear the worst. Patricia Schifferle of Pacific Advocates, a long-time observer of California’s water wars, notes that what’s being worked out is a compromise between a House bill that is “very detrimental in terms of water-quality protections and environmental protections” and a Senate bill that’s not much better—meaning that any likely compromise is likely to “take more water from the environment and give more to the west side of the southern San Joaquin [Central] Valley.”

Feinstein has long-time connections to some of the biggest players in the southern Central Valley agriculture, including the Resnick family, which owns a vast agricultural empire built on pistachios, almonds, and pomegranates.

The NRDC’s Poole says it’s anyone’s guess whether Obama would sign such a bill. She said the president would likely look to high-level California Democrats for guidance. Obama’s vow to veto the House bill came after Gov. Brown’s announced his fierce opposition to it, she pointed out. I asked Brown’s office for the governor’s take on Feinstein’s latest effort. “We have not taken a position on this legislation,” a spokesperson replied. I followed up to ask whether Brown or his team had seen drafts of the legislation, but got no reply.

Feinstein, it should be noted, has long-time connections to some of the biggest players in the southern Central Valley agriculture, including the Resnick family, which owns a vast agricultural empire built on pistachios, almonds, and pomegranates. According to the money-in-politics tracker Open Secrets, the Resnicks donated $9,800 to Feinstein’s campaign in the 2011-’13 period, and $17,900 to Rep. Valadao, the sponsor of the House bill. Westland Water District has also donated to Feinstein, Nunes, and Valadao (see its 2012 and 2014 contributions).

And Feinstein has certainly carried water, so to speak, for the Resnicks before. Back in 2009, according to the investigative website California Watch, Stewart Resnick “wrote to Feinstein, complaining that the latest federal plan to rescue the Delta’s endangered salmon and smelt fisheries was ‘exacerbating the state’s severe drought’ because it cut back on water available to irrigate crops.”

Feinstein promptly forwarded Resnick’s complaint to two US Cabinet secretaries, adding in her own letter that the administration should spend $750,000 “for a sweeping re-examination of the science behind the entire Delta environmental protection plan,” California Watch reported. The result: “The Obama administration quickly agreed, authorizing another review of whether restrictions on pumping irrigation water were necessary to save the Delta’s fish.”

Ultimately, protections for the Delta survived that maneuver. Whether they’ll survive these latest machinations remains to be seen.