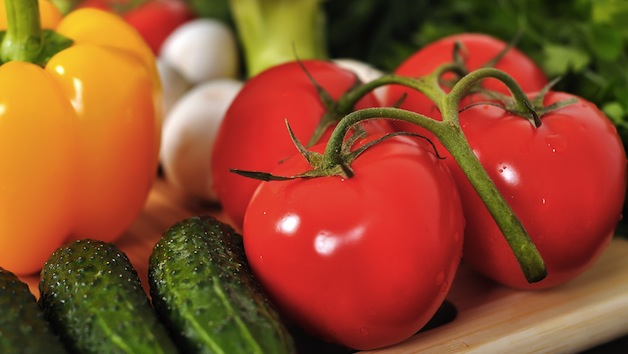 Back in 2010, I visited a labor camp that houses some of the migrant workers who grow America’s fruit and vegetables. I found people living densely in shantylike structures made of scrap metal and cinder block, surrounded by vast fields and long rows of greenhouses. Strangers in a strange land who didn’t speak the language, hundreds of miles from home, they lived at the mercy of labor contractors who, they claimed, made false promises and paid rock-bottom wages. Like all Big Ag-dominated areas, the place had a feeling of desolation: all monocropped fields, mostly devoid of people, and lots of billboards hawking the products of agrichemical giants Monsanto and Syngenta.

Laborers are required to use hand sanitizer and keep their nails trimmed so that they don’t damage the fruit.

You might think I had made my way to Florida’s infamous tomato fields, or somewhere in the depths of the California’s migrant-dependent Central Valley. Those places remain obscure to most Americans, but the gross human exploitation they represent has at least been documented in a spate of excellent recent books, like Barry Estabrook’s Tomatoland, Tracy McMillan’s The American Way of Eating, and Seth Holmes Fresh Fruit, Broken Bodies. But I was somewhere yet more remote and less well-known: Sinaloa, a largely rural state in Mexico’s northwestern hinterland.

If most Americans have heard of Sinaloa at all, it’s because of the state’s well-earned reputation as a center of Mexico’s bloody drug trade. But in addition to the eponymous drug cartel, Sinaloa also houses vast-scale, export-oriented agriculture: farms that churn out the tomatoes, melons, peppers, and other fresh produce that help fill US supermarket shelves. And the people who do the planting, tending, and harvesting tend to be from the indigenous regions of Mexico’s southern states, Oaxaca and Chiapas, where smallholder farming has been ground down by decades of free-trade policies pursued by the Mexican government, which left millions in search of gainful work to the north.

In my brief time there, I found Sinaloa overwhelming: a scary cauldron of labor exploitation, industrial agriculture, and drug violence. Now, Los Angeles Times reporter Richard Marosi and photographer Don Bartletti have documented the grim conditions faced by workers on Mexico’s export-focused megafarms in a long-form investigation, after 18 months of reporting in nine Mexican states, including, most prominently, Sinaloa. The Times plans to publish it in four parts; the first, here, is stunning.

Marosi found that Mexico’s megafarms adhere to the strictest standards when it comes to food safety and cleanliness, driven by the demands of big US buyers. “In immaculate greenhouses, laborers are ordered to use hand sanitizers and schooled in how to pamper the produce,” Marosi writes. “They’re required to keep their fingernails carefully trimmed so the fruit will arrive unblemished in US supermarkets.”

While the produce is coddled, the workers face a different reality. Pay languishes at the equivalent of $8 to $12 a day. Marosi summarizes conditions that often approach slavery:

The piece includes excellent photography and is chockfull of stories straight from the mouths of farmworkers. And it shines a bright light on a hugely important source of our food. The US now imports nearly a third of the fruit and vegetables we consume, and Mexico accounts for 36 percent of that foreign-grown cornucopia, far more than any other country. And we’re only growing more reliant on our southern neighbor—imports of Mexico-grown fresh produce have increased by an average of 11 percent per year between 2001 and 2011, the USDA reports, and now amount to around $8 billion. The Times investigations demonstrates, with an accumulation of detail that can’t be denied or ignored, that our easy bounty bobs on a sea of misery and exploitation.