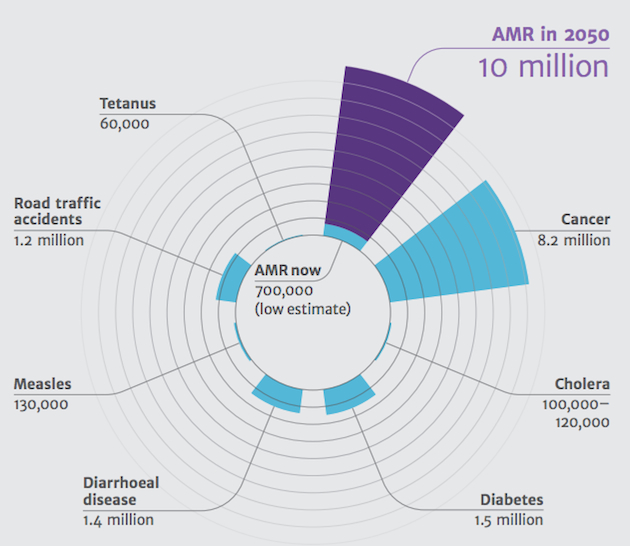 From “Antimicrobial Resistance: Tackling a crisis for the health and wealth of nations.”

If your goal is to ruin the effectiveness of antibiotic drugs, I can think of two efficient ways. One would be to wildly overprescribe them—say, to people suffering from a cold virus, even though antibiotics work their magic on bacterial pathogens, not viral ones. The other would be to feed daily, low doses of them to animals confined by the thousands in vast indoor facilities. In both cases, you’re creating ideal conditions for bacteria to evolve to survive the drugs we throw at them: A percentage of bacteria withstands the chemical onslaught, and passes genes on to ever-heartier next generations.

Unhappily, both of those practices—overprescription to people and routine use on animal farms—have been in play pretty much since the emergence of antibiotics after World War II. And so we have entered an age of widespread antibiotic resistance—on our way to what Thomas Frieden, of the Centers for Disease Control and Prevention, has called a “post-antibiotics era.”

What would that be like? In a great 2013 piece, the journalist Maryn McKenna laid out all the ways we quietly rely on antibiotics to control and minimize infections in high-stress but routine situations—everything from cesarean sections to car accidents. And in a new report, the UK government has come out with some startling global projections. Currently, the report finds, 700,000 people die annually from pathogens that have developed resistance to antibiotics, a figure the report calls a “low estimate.” If present trends continue, antibiotic failure will claim 10 million lives per year by 2050, the report concludes. That’s more carnage than what’s currently caused by cancer and traffic accidents combined.

The economic toll will also be mind-boggling. By 2050, the report estimates, antibiotic resistance will be incurring $8 trillion in annual expenses globally. That’s equal to nearly half of the total output of the US economy in 2014—an enormous hemorrhaging of global resources.

The report, the first in an ongoing review of antibiotic resistance ordered by British Prime Minister David Cameron last summer, focuses narrowly on impacts. Future ones will discuss potential solutions. Here’s a start: Convince the US meat industry, which now sucks in 80 percent of the antibiotics consumed in the country, to wean itself from its reliance on routine antibiotic use.