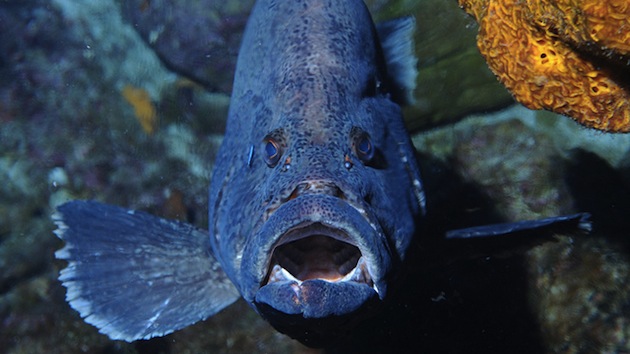 We land-based creatures live in the midst of a massive extinction crisis, just the sixth one over the past half billion years. What about the oceans? A much-discussed, wide-ranging recent Science study (paywalled) has good news: Sea critters are currently faring much better than their land counterparts, which are going extinct at a rate 36 times higher. (That number is likely exaggerated, the authors note, because scientists have done a much better job of cataloging land critters than sea critters.)

Tackling the over-fishing problem will be no mean feat, given the expected rise of the human population to 9 billion by 2050, but it’s probably doable.

But the report also brings horrible news: Between over-fishing and habitat destruction (think acidification, coastal development, warming, coral destruction, dead zones from fertilizer runoff, etc.), the oceans may be on the brink of their own extinction catastrophe. (The New York Times’ Carl Zimmer has more details here; Vox’s Brad Plumer has a good analysis here.) Today’s marine extinction rates look eerily similar to the “moderate” land-based ones just before the Industrial Revolution, the authors warn. “Rates of extinction on land increased dramatically after this period, and we may now be sitting at the precipice of a similar extinction transition in the oceans.”

What to do? Tackling the over-fishing problem will be no mean feat, given the expected rise of the human population to 9 billion by 2050, but it’s probably doable. One place to start is smarter fish farming. Globally, about half of seafood consumed comes from farms, but much of it actually harms the oceans. Salmon farms, for example, rely on sucking up mass quantities of wild fish for feed—it takes at least three pounds of anchovies, sardines, menhaden, and other “forage fish” to deliver a pound of farmed salmon (not to mention the waste problem created when you confine thousands of big fish loose together).

And Asian shrimp farms—source of nearly 90 percent of the shrimp consumed in the US—have been plunked down atop what had been highly productive coastal ecosystems called mangrove forests. According to the United Nations, as much as a third of the globe’s mangroves have been destroyed since 1980—and shrimp and other forms of aquaculture account for more than half that loss.

But there are ways to improve fish farming. Filter-feeding species like oysters and clams—which get their nutrients by filtering out plankton and other stuff suspended in the water—require no feed and can enhance coastal ecosystems. And there are farming systems (both ancient and new-fangled) that combine several species and even land-based crops to generate lots of high-quality food with few inputs and little waste. Finally, my colleagues Maddie Oatman and Brent Brownell have documented a successful effort to farm top-quality trout—normally a fish-eating fish—with vegetarian feed made mainly of (non-gross) food waste. Maddie’s article here; video below.

Then there’s that oft-repeated, little-heeded advice to choose seafood low on the trophic scare—that is, fish and other sea critters that eat plants and plankton, not other fish. Oysters, clams, and mussels are all good examples. And instead of choosing farmed salmon, go with the little fish that gets fed to them. To that end, here are two recipes for sardines—trust me, they’re delicious.

Now, as tricky as it will be to cut back on overfishing by convincing fish farmers to mend their ways and consumers to change their habits, the even bigger challenge will be to stop trashing the place all of these critters call home. Habitat degradation, according to the Science authors, is the main trigger for the extinction wave we’re now seeing on land, and is probably the biggest threat to cause a similar catastrophe at sea. “If you cranked up the aquarium heater and dumped some acid in the water, your fish would not be very happy,” Malin L. Pinsky, a marine biologist at Rutgers University and an author of the report, told The Times’ Zimmer. “In effect, that’s what we’re doing to the oceans.” Of course, both warming and acidification are the direct result of our fossil fuel habit—the same force that’s generating potentially catastrophic climate change up here on land. There’s no saving the oceans without solving that problem.