The world, as a whole, is getting less hungry. Over the past two decades, the levels of undernutrition in developing countries from Sub-Saharan Africa to Southeast Asia have declined. Unfortunately, so has the quality of our diets.

That’s the main takeaway of a study published by The Lancet Global Health on Wednesday that looked at the dietary patterns across 187 countries—comprising about 89 percent of the global population—in 1990 and 2010. Check out the maps below, which break down eating habits by country on a scale of green (the healthiest) to red (the unhealthiest). The first map shows which countries are eating the most healthy foods like whole grains, fruits, vegetables, fish, nuts and seeds, beans and legumes, and milk (see, for example, Chad, the Central African Republic, Mali, and Turkey). The second map shows which countries are eating the most unhealthy foods that are high in fat and salt, as well as sugary drinks, unprocessed red meats and processed meats (see the United States, Russia, Austria, the Czech Republic, and Brazil, among others). 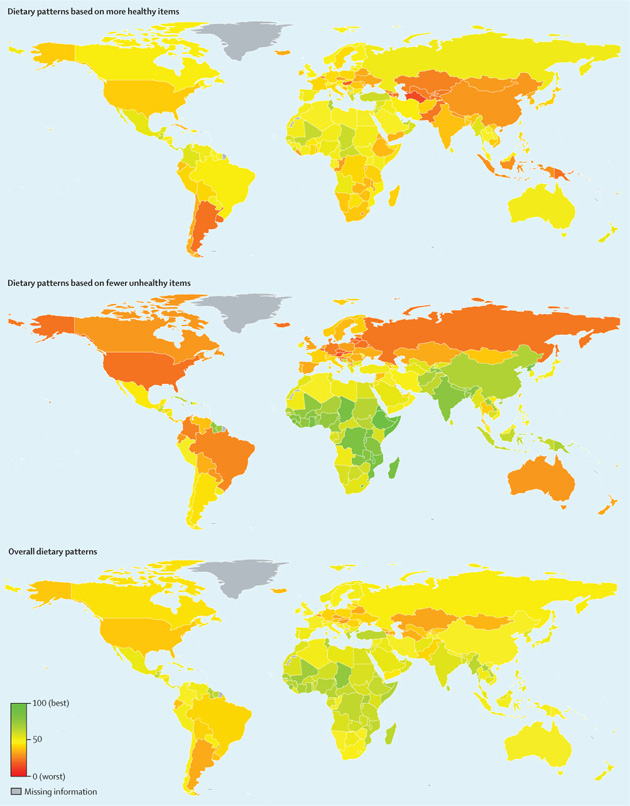 The next three maps show changes in dietary patterns from 1990 to 2010, again on a color scale, with green countries making healthy changes and red countries making unhealthy changes. Russia, Mongolia, Laos, and Paraguay are outpacing many other countries with their increase in nutritious foods, as the top map shows, while the second map reveals that Uganda, Vietnam, and Armenia are quickly finding a taste for fatty or sugary treats. And when it comes to overall dietary changes since 2010, shown in the last map, it seems that China, Angola, and Congo aren’t doing very well. 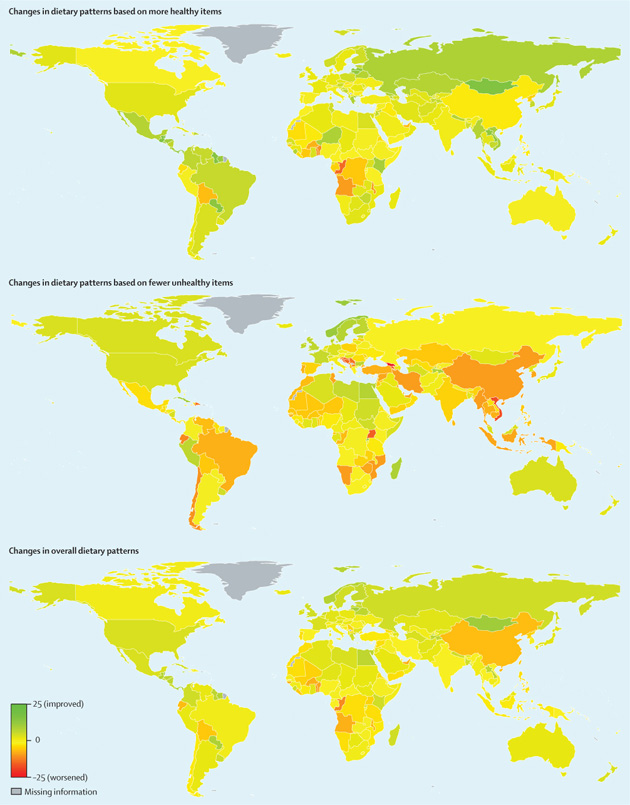 A team of researchers made these maps by evaluating hundreds of national surveys about diets. Looking at the big picture, they found that people around the world are, on average, eating more nutritious foods than they did 20 years ago, but they’re also digging into more junk—much more junk. “Consumption of healthier foods and nutrients has modestly increased during the past two decades; however, consumption of unhealthy foods and nutrients has increased to a greater extent,” the researchers explained.

People around the world are, on average, eating more nutritious foods than they did 20 years ago, but they’re also digging into more junk.

On average, older adults are eating better than younger adults, while women are eating better than men. There are also major differences regionally, depending on countries’ income levels. While people in the United States, Canada and western Europe are among the worst in the world for high consumption of unhealthy food, they’re eating less junk than they used to, which helps explain reductions in blood pressure, blood cholesterol, and cardiovascular mortality in these countries. By comparison, people in many developing countries eat relatively healthy diets, but they’re eating more junk than they did in the past.

These socioeconomic variations have ramifications for public health. International food programs usually focus on fighting hunger, but in nearly every region of the world, the researchers said, diet-related health problems due to undernutrition are now less common than those due to non-communicable chronic diseases, and the food we eat plays a role in causing many of these diseases. By 2020, nearly three-quarters of all deaths globally will be attributable to non-communicable chronic diseases, they said, adding that without major changes to diet quality, these diseases and obesity will become much more common among the world’s poor.

It’s unclear exactly why low-income countries are eating more unhealthy foods, but the reasons are probably varied. In northwest sub-Saharan Africa, the researchers said, food prices have increased and diet quality has worsened, perhaps due to economic liberalization and marketing of unhealthy foods to the region’s wealthiest people. Violent conflicts might also play a role in certain countries, by hindering food production and trade. “Our work should help to link the possible economic and political factors to actual diets,” they wrote, “and to assess determinants of the potential divergence in consumption of healthy foods in the poorest nations in the world.”