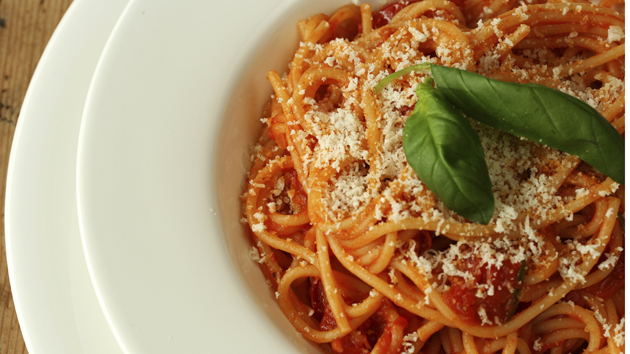 Last week, lovers of rice rejoiced when the Washington Post reported on a simple trick to improve the nutritional value of the food. According to researchers in Sri Lanka, all you have to do is add a fat (they used coconut oil) to the cooking water, cool your rice over night, and voilà!—up to to 50 percent of the calories (a cup of rice contains about 200 when cooked conventionally) are gone.

It works by converting the white rice—which made mostly of digestible starch—into one that is indigestible, or “resistant,” meaning that it’s eventually excreted instead of metabolized by our bodies. The researchers found that adding fat and then allowing the rice to cool changed the composition even after the rice was reheated.

With diabetes, metabolic syndrome, and obesity rates rising around the world, this simple tweak to a dietary staple for billions could be a major boon to public health. And it’s just one example of how chemistry can be put to work in the kitchen. Here are five more ways to improve foods’ nutritional content through cooking:

The study participants who had the reheated pasta instead of fresh reduced spikes in blood sugar by 50 percent.

1. Use the heating/cooling method on other carbs too: The BBC reported last year that pasta might be healthier when eaten as leftovers. Researchers from the University of Surrey found that eating cold pasta resulted in smaller spikes in glucose than eating freshly cooked pasta. These results were even more pronounced when the pasta was reheated: The study participants who had the reheated pasta instead of fresh reduced spikes in blood sugar by 50 percent. A previous study in 2009 also showed that freshly cooked legumes, cereals, and tubers had significantly higher levels of resistant starch after multiple cycles of heating and cooling. The resistant starch in peas, which had the most dramatic change, increased by 115 percent. Resistant starch consumption has been linked to improvements in gut functioning, insulin sensitivity, increased satiety, and even decrease in fat accumulation.

2. Turn down the heat: Chances are you are already well aware that fried foods aren’t doing good things for your health. But according to the FDA the downsides of frying aren’t just calories and fat—the high temperature is a problem too. When certain foods are subjected to high temperatures (anything above 248 degrees Fahrenheit), one byproduct is a compound called acrylamide, a possible carcinogen that also has been linked to nerve damage at high levels. French fries and potato chips have high amounts of acrylamide, but the chemical is also produced in many home-cooked foods including toast, potatoes, and even coffee. To mitigate your exposure, soak potatoes in water for more than 30 minutes before cooking, don’t over-brown your bread, and refrain from frying your food. Dark-roast coffee may have less acrylamide than light, an FDA report suggests.

3. Don’t forgo frozen: Fruits and vegetables found in the freezer aisle can sometimes be more nutritious than fresh ones on the shelf. As my colleague Kiera Butler reported last year, before being frozen, produce undergoes a process called blanching that stops the enzymes that would otherwise cause the vegetables to lose color, texture, and nutrients. Because this process happens soon after harvest, frozen vegetables sometimes retain more fiber, vitamins, and minerals than the fresh ones that have to travel to the grocery store. Blanching might also make certain vitamins more digestible.

4. Marinade meats: Meat marinades do more than enhance flavor and texture—they prevent the formation of heterocyclic amines (HCAs) and polycyclic aromatic hydrocarbons (PAHs), which are dangerous chemicals created when meats are cooked at high temperatures. These compounds have been linked to cancer and reproductive problems. While there are noted benefits from marinades with lemon juice or vinegar, a study published last year in the Journal of Agricultural and Food Chemistry found that when you marinade meat with beer, the carcinogenic potency is greatly reduced. Black beer had the best results, reducing PAHs found in pork by 53 percent.

5. Use your microwave: Yes, that’s right—the microwave has been redeemed. Because it cooks food quickly without exposing it to high levels of heat, the microwave can preserve nutrients when cooking vegetables. A 2003 study by Alabama Agricultural and Mechanical University showed that, compared to boiling, microwaving retained more water-soluble vitamins in turnip greens, and another done in 2008 by the University of Tsukuba in Japan found that the microwave was one of the best cooking options for preserving antioxidants in peppers. Researchers also found that chemicals called glucosinolates—which may fight cancer—actually increased after red cabbages were microwaved. The American Institute for Cancer Research also recommends precooking meat in the microwave before putting it on the grill to reduce the cancer-causing HCAs and PAHs mentioned above.