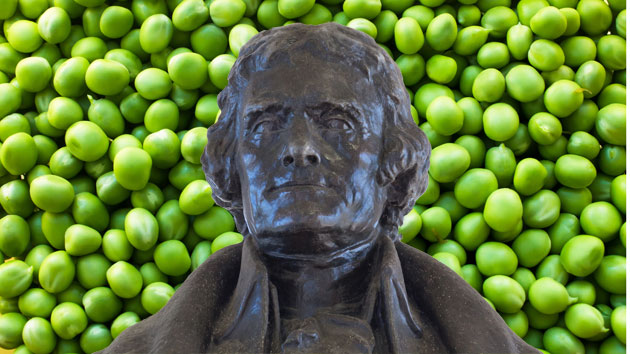 On Wednesday, after the New York Times proposed adding peas to guacamole (what’s next, mayonnaise?), President Barack Obama announced that the proper way to make guacamole is with avocado, onions, garlic, and hot pepper. It wasn’t the first time the leader of the free world had disparaged peas. In 2011, when Congress stalled on raising the debt ceiling, he announced that it was time for all parties involved to “eat our peas“—swallow the tough pill, if you will.

Thomas Jefferson’s favorite vegetable, according to the Thomas Jefferson Foundation, was the English pea. He cultivated 19 different kinds of peas in the Monticello vegetable garden, including 15 kinds of English peas. Among them were Marrowfat, Hotspur, Blue Prussian, and Early Frame. (Jefferson even spoke with Mother Jones about his peas in February.) Letters to his daughter, Mary, often made reference to the status of the peas. Here he is discussing peas in a letter to George Washington: 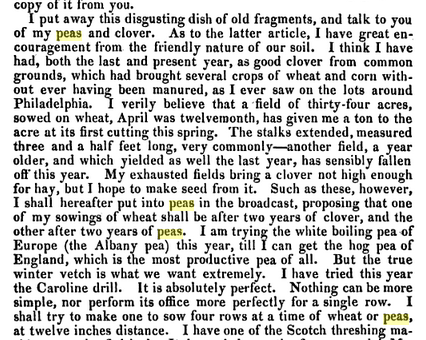 Peas. Observations on the writings of Thomas Jefferson/Google Books

Peas weren’t just sustenance for Jefferson. They were a way of life; every year he would hold a contest with his neighbor to see whose peas would sprout first. Per the Monticello website:

Though Jefferson’s mountaintop garden, with its southern exposure to warmth and light, should have provided an advantage for the contest, it seems that the contest was almost always won by a neighbor named George Divers.

As Jefferson’s grandson recalled: “A wealthy neighbor [Divers], without children, and fond of horticulture, generally triumphed. Mr. Jefferson, on one occasion had them first, and when his family reminded him that it was his right to invite the company, he replied, ‘No, say nothing about it, it will be more agreeable to our friend to think that he never fails.'”

Divers, that clever knave! There’s even a children’s book, First Peas to the Table, inspired by Jefferson’s fruitless obsession with winning at peas.

Jefferson’s friends in government got in on the action too. At his prodding, George Washington attempted to plant English peas at Mount Vernon, with  mixed results. But Washington loved peas so much that when a bunch Tories attempted to kill him, they did so by poisoning a dish of his favorite food—peas. Wise to the plot, a 13-year-old girl fed them to his chickens first as a precautionary measure. (Or at least, that’s the legend. It’s probably apocryphal.)

The point is, Thomas Jefferson and George Washington loved peas. If avocados had even been around when they were president, they would have made pea guacamole. And they would have loved that, too. Pea hold these shoots to be self-evident.