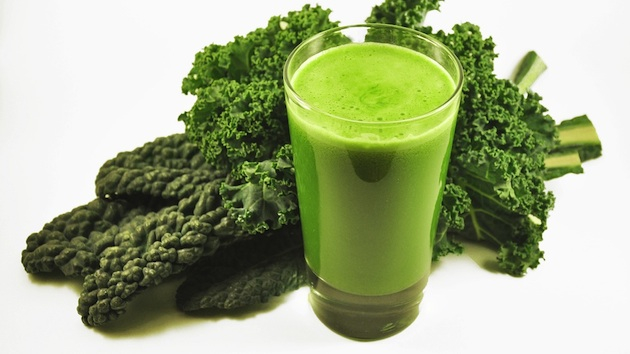 If eating kale is good for me, then eating a whole lot it must be even better. Right? <a href="http://www.shutterstock.com/cat.mhtml?lang=en&language=en&ref_site=photo&search_source=search_form&version=llv1&anyorall=all&safesearch=1&use_local_boost=1&autocomplete_id=&searchterm=kale&show_color_wheel=1&orient=&commercial_ok=&media_type=images&search_cat=&searchtermx=&photographer_name=&people_gender=&people_age=&people_ethnicity=&people_number=&color=&page=1&inline=174029480">John E. Manuel</a>/Shutterstock

How hipster is kale? For $28, Urban Outfitters will sell you a kale t-shirt. To prep for a big blizzard in early 2015, residents of a trendy Brooklyn section cleaned out the kale bins of their neighborhood Whole Foods. And what would the juicing craze be without it?

Kale is really good at taking up thallium—a toxic heavy metal—from the soil.

That’s a possibility raised by an article in Craftsmanship magazine by Todd Oppenheimer. The piece doesn’t establish a definitive link between heavy kale consumption and any health problem, but it does raise the question of whether too much of even a highly nutritious food like kale can have unhappy side effects.

The article focuses on an alt-medicine researcher and molecular biologist named Ernie Hubbard, who began to notice an odd trend among some of his clinic’s clients in California’s Marin County, a place known for its organic farms, health-food stores, and yoga studios. Extremely health-conscious people were coming into to complain of “persistent but elusive problems”: “Chronic fatigue. Skin and hair issues. Arrhythmias and other neurological disorders. Foggy thinking. Gluten sensitivity and other digestive troubles. Sometimes even the possibility of Lyme Disease.”

Hubbard began to find detectable levels of a toxic heavy metal called thallium in patients’ blood samples—at higher-than-normal leves—as well as in kale leaves from the region. Meanwhile, “over and over,” he found that patients complaining of symptoms associated with low-level thallium poisoning—fatigue, brain fog, etc.—would also be heavy eaters of kale and related vegetables, like cabbage.

And he found, in the form of this 2006 peer-reviewed paper by Czech researchers, evidence that kale is really good at taking up thallium from soil. The paper concluded that kale’s ability to accumulate soil-borne thallium is “very high and can be a serious danger for food chains.” And here’s a peer-reviewed 2013 paper from Chinese researchers finding similar results with green cabbage; a 2015 Chinese study finding green cabbage is so good at extracting thallium from soil that it can be used for “phytoremediation”—i.e., purifying soil of a toxin—and a 2001 one from a New Zealand team finding formidable thallium-scrounging powers in three other members of the brassica family: watercress, radishes, and turnips.

Now, just because kale and other brassicas can effectively take up thallium from soil doesn’t mean that they always contain thallium. The metal has to find its way into soil first. It exists at low levels in the Earth’s crust, and the main way it gets concentrated at high enough levels to cause worry is through “nearby cement plants, oil drilling, smelting, and, most of all, in the ash that results from coal burning,” Oppenheimer reports. The researcher he profiled, Hubbard, has so far not succeeded in nailing down the source of the thallium that he found in his kale samples.

And there’s also the question of quantity. One of Hubbard’s patients with heightened thallium levels in her urine and mild symptoms of thallium poisoning ate so much cabbage over the years that  she called herself the “cabbage queen.” When she “cut way back” on her favorite vegetable, she tells Oppenheimer, her thallium levels dropped, and her symptoms improved.

Where does all of this evidence, anecdotal and otherwise, leave us—beyond the need of much more research on US-grown kale? There’s nothing here that makes me want to stop eating brassicas, probably my favorite vegetable genus and one undeniably loaded with many valuable nutrients.

But it does make me wary of downing brassicas daily at great quantities over extended periods, the way some people may be doing as part of the juice craze. This recipe for “mean green juice,” for example, calls for six to eight kale leaves in a single serving—much more than most of us would consume in a side dish of sautéed kale. In all great things—wine, butter, ice cream, even kale—moderation makes sense.