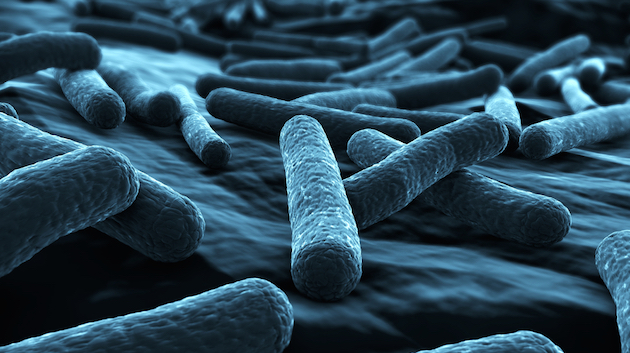 Antibiotic resistance: It puts the "eek" in E. coli. <a href="http://www.shutterstock.com/pic-72915925/stock-photo-e-coli-bacteria-close-up.html?src=ppEtMu73bpXU2aCNLn67eQ-1-3">fusebulb</a>/Shutterstock

In mid-November, a group of Chinese and UK researchers published a paper in The Lancet delivering some sobering news: They had found a strain of E. coli in Chinese pigs that had evolved to withstand colistin, a potent antibiotic widely considered to be a last resort against a variety of pathogens that can resist antibiotics. Worse, the gene that allowed the E. coli to shrug off colistin easily jumps among bacterial species, and is thus “likely to spread rapidly into key human pathogens”—think fun stuff like salmonella and Klebsiella. The cherry on top: The authors warn that these colistin-defying nasties are “likely” to go global. What’s it all mean? Here’s a quick guide:

• How did E. coli in pigs evolve to resist a drug that’s so important in human medicine? When China began to ramp up pork production to satisfy the demands of its growing middle class decades ago, it emulated the US model: moving away from small-scale, widely dispersed farms and packing pigs by the thousands into giant facilities, and feeding them regular low doses of antibiotics to make them grow faster.

Around 80 percent of the antibiotics sold in the United States go to livestock farms, and of that, 60 percent are considered crucial to human medicine.

Here in the United States, farm animals aren’t given colistin, but they do get plenty of antibacterial drugs that people use, too. Around 80 percent of the antibiotics sold in the United States go to livestock farms, and of that huge gusher of drugs, 60 percent are considered crucial to human medicine. (Examples include tetracycline and penicillin).

In China, though, hog producers use, well, tons of colistin, The Lancet paper shows. Driven largely by China, the authors write, global farm-related colistin demand is expected to rise 23 percent by 2021—and the market for it is already worth $229.5 million. And it’s not just used to fatten hogs—”it has also been used in farmed fish diets where it has been shown to improve health and promote growth.”

• How important to human medicine in colistin? Pretty. Colistin is an old antibiotic (introduced in 1959) that fell into disuse because of harsh side effects: It can cause liver damage as well as “dizziness, weakness, facial and peripheral paresthesia, vertigo, visual disturbances, confusion, ataxia, and neuromuscular blockade,” according to a 2005 paper by Greek researchers. Despite those unpleasant qualities, it reemerged as a crucial tool for doctors fighting common infections as other, less harsh antibiotics began to lose effectiveness. A 2012 Bloomberg article reported that “in the US, a pneumonia-causing variant of the bowel-dwelling microbe Klebsiella pneumoniae, dubbed KPC, has been reported in 37 states, and associated with mortality rates as high as 40 percent.” Because of a “silent dissemination” of KPC, “especially in residents of long-term care facilities,” the Bloomberg reporters found, “there is a major increase in the use of colistin.”

For the first time, the colistin-resistant gene has turned up in a particularly portable form of DNA found in bacterial cells—meaning it can easily jump to other pathogens.

• How would colistin-resistant E. coli genes jump to other bacteria? Other bacterial strains have evolved to resist colistin—in a paper published in 2012, researchers reported finding resistant E. coli and salmonella strains in Brazilian pigs. What make The Lancet finding so troubling is that, for the first time, the resistant gene the researchers identified turned up in plasmid, a particularly portable form of DNA found in bacterial cells. “Bacteria can…transfer plasmids to one another through a process called conjugation,” according to a Nature explainer. They’re so good at moving genes among bacteria that “scientists have taken advantage of plasmids to use them as tools to clone, transfer, and manipulate genes,” Nature reports.

• Why doesn’t Big Pharma just roll out new antibiotics? Despite the massive and rising toll of antibiotic resistance—it now kills 700,000 people per year globally, on pace to expand to 10 million by 2050—large pharmaceutical companies with fat R&D budgets aren’t keen to invest in discovering new antibiotics. “Antibiotics…have a poor return on investment because they are taken for a short period of time and cure their target disease,” the World Health Organization stated in a 2011 report. “In contrast, drugs that treat chronic illness, such as high blood pressure, are taken daily for the rest of a patient’s life.”

Things haven’t changed much since 2011, the International Business Times‘ Amy Nordrum reported in March. “The handful of biotech firms that are making them [new antibiotics] today have focused on the narrow slices of the infectious disease spectrum that seem most likely to generate profits,” she found. “Therefore, only a fraction of the medicines that are needed are being produced.” She added, though, that earlier this year, President Barack Obama “committed $1.2 billion in his annual budget proposal—an unprecedented amount— to the fight against life-threatening infections caused by resistant bacteria.”

• So are we screwed? Is the “post-antibiotics era” dawning? That would indeed be awful. As Maryn McKenna put it in a great 2013 essay:

Before antibiotics, five women died out of every 1,000 who gave birth. One out of nine people who got a skin infection died, even from something as simple as a scrape or an insect bite. Three out of ten people who contracted pneumonia died from it. Ear infections caused deafness; sore throats were followed by heart failure. In a post-antibiotic era, would you mess around with power tools? Let your kid climb a tree? Have another child?

The Lancet study’s authors are certainly sounding the alarm. Timothy Walsh, a professor at the University of Cardiff and a co-author, told the BBC that “all the key players are now in place to make the post-antibiotic world a reality.” He added that if the E. coli gene that arose to resist colistin “becomes global, which is a case of when not if, and the gene aligns itself with other antibiotic resistance genes, which is inevitable, then we will have very likely reached the start of the post-antibiotic era…At that point if a patient is seriously ill, say with E. coli, then there is virtually nothing you can do.” In addition to a UN effort to curtail climate-warming greenhouse gas emissions, about to get underway in Paris, it sounds like the globe’s nations need to reach an agreement to keep antibiotics necessary for human medicine the hell away from farms—and fast.