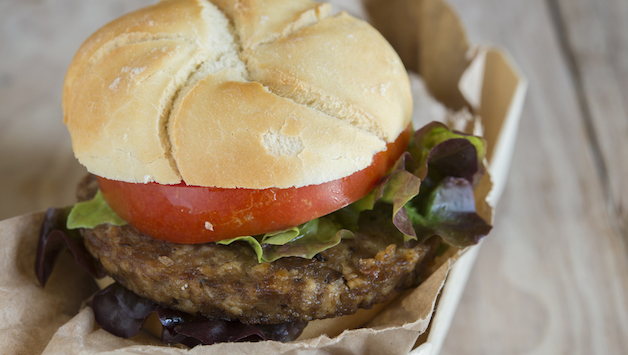 A burger made from seitan, or wheat gluten <a href="http://www.shutterstock.com/pic-322776170/stock-photo-burguer-seitan-and-shiitake.html?src=dt_last_search-1">SKABARCAT</a>/Shutterstock

When the giant companies that dominate US meat, dairy, and egg production want something in Washington, they lean on armies of lobbyists, which are financed by flush trade groups like the North American Meat Institute, the National Pork Producers Coalition, the National Chicken Council, and the National Cattlemen’s Beef Association. But who speaks up for seitan chops on the Hill?

Until recently, essentially no one, says longtime food industry critic and researcher Michele Simon. And so she has launched the Plant Based Foods Association, which exists to “ensure a fair and competitive marketplace for businesses selling plant-based foods intended to replace animal products such as meats, dairy, and eggs.” The brand-new trade group already has a part-time lobbyist, the longtime vegan- and organic-food advocate Elizabeth Kucinich, wife of former US Rep. Dennis Kucinich (D-Ohio).

Simon, a committed vegan, told me two factors inspired her to organize the group: a recent spate of alt-protein companies coming on the scene, and the struggle they face “just to name their products.”

California upstart Hampton Creek, for example, had to fend off challenges from processed-food giant Unilever (the maker of Hellmann’s mayonnaise), the American Egg Board, and the US Food and Drug Administration to call its eggless mayo product “Just Mayo,” she noted. She also cited the case of another California company, Miyoko’s Kitchen, which was ordered by the California Department of Food and Agriculture to market its products not as nut-based cheese, but rather as “cultured nut product.”

After years studying Big Meat trade groups and how they operate, she learned how effective they are, not just at shaping public policy to “promote more harmful foods,” she says, but also at communicating with consumers, serving as a go-to source for reporters, and nudging retailers on how to market their products. And so the Plant Based Foods Association aims to conduct those services and develop a “collective voice” for companies that offer animal-free meat, dairy, and egg alternatives.

Now, in our age, enormous food companies don’t respond to new threats to their market share just with lawsuits and appeals to federal overseers like the FDA, as Unilever did with Hampton Creek. They also respond by imitation and acquisition—they have the deep pockets needed to launch new products or just buy the companies that make them. Indeed, just last month, Unilever rolled out its own eggless mayo-like spread.

So what’s to stop big-food conglomerates like Unilever from taking over the Plant Based Food Association and using it to their ends? Right now, the PBFA’s membership list consists of companies that deal solely in vegetarian products, from nut-milk upstarts Califia and Malk to lesser-known firms like Tofuna Fysh. (Vegan tuna salad, anyone?) Simon said any purveyor of vegetable-based protein products, including Unilever, is welcome to join the trade group, but the bylaws state that a majority of its board of directors will represent pure-play vegetarian companies.

I’ve long been ambivalent about elaborately processed plant-based meat, dairy, and egg substitutes. I’ve puzzled over why people looking to eat less animal product just can’t just gravitate to deliciously cooked beans and grains, and even called for a falafel revolution as an alternative to soy and pea protein tweaked in a factory to taste a lot like chicken. Why do we need prepackaged vegan tuna salad?

Simon responded that she herself eats mainly whole vegan foods (she mentioned quinoa and kale), and that she’d “love it if everyone just adopted my way of eating.” Meanwhile, though, animal products loom large in most Americans’ diets, and the “environmental destruction from industrialized animal production” continues piling up, she said. (Here‘s the eminent ecologist Vaclav Smill on industrial meat’s footprint.) “We need every tool in the toolbox,” and conveniently packaged, high-protein vegan products play a crucial role in the effort to convince people to eat less meat, she said.

In other words: Quit being such a food snob, Philpott.