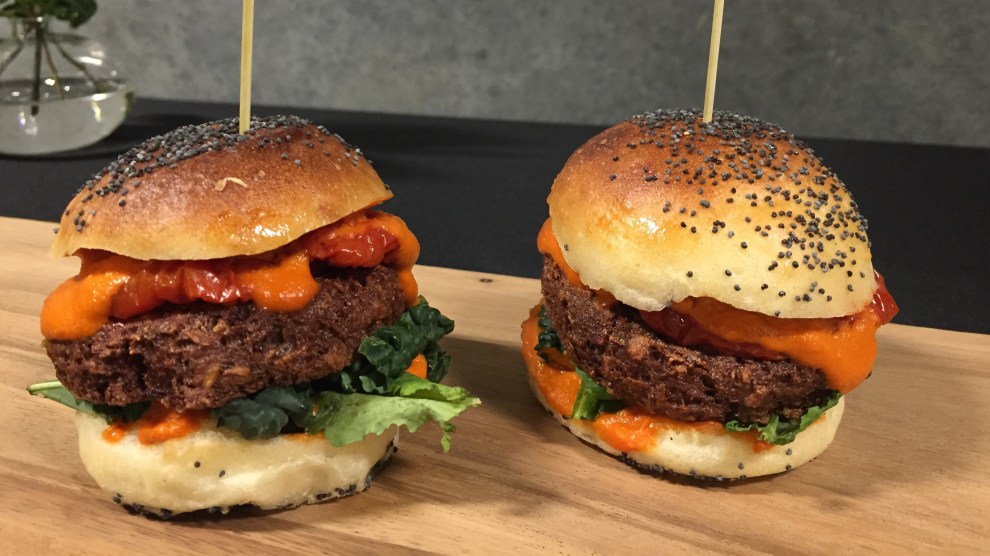 Burgers that bleed. Eggless mayo. Chicken strips without the bird. In the last few years, a handful of California companies have transformed fake meat as we know it—and earned a ton of press.

But can these Silicon Valley startups take on the multibillion-dollar meat industry? On a recent episode of Mother Jones‘ food politics podcast, Bite, we looked at fake-meat makers that are trying to scale up—and I attended a college class about making meat alternatives. Listen here:

“We know our demand is waiting for us,” Lee said. “Not just in fine dining, but in more accessible restaurants around the world.”

Although these companies may not yet have the financial power of the meat industry, their products appeal to a growing number of eaters concerned about their health and that of the environment. Indeed, in 2015 the World Health Organization declared red meat a probable carcinogen. Animal agriculture across the globe is responsible for a whopping 14.5 percent of greenhouse gas emissions.

The increasing interest in fake meat has attracted the attention of major companies. Last fall, meat industry giant Tyson Foods bought a 5 percent stake in Beyond Meat, a plant-based protein company based in Southern California. Google reportedly tried to buy Impossible Foods for somewhere in the ballpark of $200-$300 million. (Brown refused the offer.)

For the podcast episode, I visited a class on the business of meat alternatives at the University of California-Berkeley’s Sudartja Center for Entrepreneurship and Technology, where undergraduates were tasked with inventing new fake meat products. The class was taught by professionals in the emerging field, food scientists, and acclaimed chefs.

On the day I visited, students reflected on a recent homework assignment to buy and cook fake meat at home. They described the plant-based proteins’ textures and flavors—and overwhelmingly concluded that telling the fake stuff apart from animal protein was easy.

Vegan chef David Anderson, one of the guest lecturers, warned the students about how tricky it is to make a substance look, cook, and taste just like animal flesh. “It’s like a Rubik’s Cube,” he said. “Once you mess with one ingredient, it throws the whole thing off.”

To hear more about the class and the pioneers in the field of fake meat, listen to this week’s episode of Bite. Also included: Doctors are changing their beliefs about vegan diets.

Bite is Mother Jones’ food politics podcast. Listen to all our episodes here, or by subscribing in iTunes or Stitcher or via RSS.