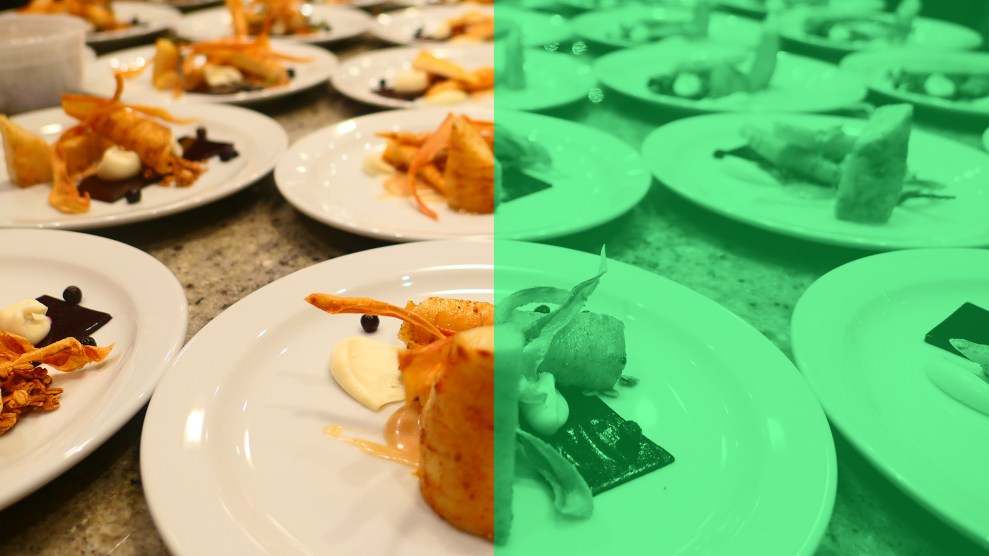 San Francisco’s first ever Thursday Infused, a “gourmet series for the canna-curious,” begins at 6:30pm one evening in March. I’m greeted at the door of a handsome purple Victorian house by Jamie Evans, a willowy blonde in a yellow silk dress who organizes events under the name the Herb Somm. Another woman in red lipstick hands me a glass of pink Prosecco. I realize I am under-dressed, one of many faux pas I will make around this group of elite San Francisco entrepreneurs trading in cannabis-infused luxury foods.

Serious chefs in this scene refer to the ingredient by its scientific term, “cannabis.”

My wardrobe choice wasn’t my first mistake. That came earlier in the week when I emailed the event’s chef, Michael Magallanes, a veteran of the Michelin-starred restaurant Aziza. I wondered how an expert in molecular gastronomy would work with the flavor of weed, so I asked him if I could interview him about food and pot. Oops—serious chefs in this scene refer to the ingredient by its scientific term, “cannabis,” I soon learn. Magallanes forgave my mistake and invited me to this educational happy hour, where for $110, young professionals sip wine and sample some of California’s most gourmet cannabis products.

“Cannabis-laced dinners with celebrity chefs at private parties have flourished” in California’s coastal cities in recent years, the Los Angeles Times reported in December. But until now, guests needed a medical marijuana card to attend. That all changed on January 1, when the plant became legal for recreational use in California—though cities and counties get to decide whether they’ll allow businesses to sell it. The state’s edible industry is expected to top $100 million in sales in 2018, industry analysts told the Times. The Specialty Food Association ranked cannabis cuisine as one of the top ten food trends to watch for in the coming year. This vast new sea of consumers could mean the proliferation of high-end edible companies and more events like Thursday Infused.

At the start of the evening, guests pick at piles of grapes and make polite conversation on the back patio. I introduce myself to Jonathan, a personal stylist wearing a brushed camouflage shirt and a green Rolex. His fascination with “the whole concept of a high-end experience based on edibles” drew him to the event, he tells me. “I was one of those guys who went to a Phish show, ate a whole cookie, and just wouldn’t leave my tent, and after that I was just afraid of them,” he says, adding that he’d recently taken a more measured approach to the treats. His friend Amanda, who works in advertising, chimes in: “I’m over the phase of being in college, and making brownies and cookies, and getting way too high,” she says. “It’s interesting to see, now that weed is so prominent in San Francisco, how we refine it.”

“I was one of those guys who went to a Phish show, ate a whole cookie, and just wouldn’t leave my tent,” one guest said.

In the kitchen, Chef Magallanes, a lanky, unsmiling man with strawberry blonde sideburns, spreads orange puree onto glossy white plates with the concentration of a heart surgeon. Just after 7:00, Evans asks everyone to take a seat at one of eight or so long tables decorated with cheerful bouquets arranged by someone referred to as Mother Indica. I head to a spot in the back of the room. A woman who refers to herself as an “industry influencer,” clad in pink plastic earrings in the shape of a female symbol encircling a marijuana leaf, is taking selfies in the seat across from me. Watercolor painted cards on the table offer tasting advice for cannabis’ various aromatic compounds, or terpenes. For instance, the card tells me, myrcene, a terpene found in Himalayan Gold and White Widow strains, has earthy aromas, goes well in spinach quiche, and pairs nicely with Pinot Noirs and Syrahs.

Evans makes a brief welcome speech, noting that she envisioned the event as a celebration of cannabis in the culinary world. “There’s a stigma following cannabis,” she says. “It’s time we break that stigma!” The audience whoops and claps.

Magallanes takes her place and gives a brief run-down of how his food infusions work: He uses heat to activate the THC, and from there infuses it into an olive oil or coconut oil, which he incorporates into purees and powders. Magallanes gets samples tested in a lab, so he knows exactly how much THC ends up in his food. In total, he’ll be serving guests 5 milligrams of THC, a beginner’s dose. (I requested an even weaker serving of 2.5 milligrams.)

The appetizers arrive, starting with a rice cracker topped with avocado puree, pickled fresno chiles, and cannabis-infused coconut powder. Then comes roasted carrots rubbed in coffee over chocolate and a carrot puree. I don’t detect cannabis until the third appetizer, roasted parsley root with vanilla crème and a brown butter gastrique—plus an unmistakable aftertaste. “You can sort of taste it in the root,” I overhear Scott Peabody say from the end of the table. “I like it, I think it tastes good,” he adds.

There’s a good reason his palate is more refined than mine, I learn after striking up a conversation with Peabody, a chef who has worked with the likes of Thomas Keller. Peabody now does contract work for photographer and creative director Monica Lo, seated across from him. The two were once employed at Nomiku, makers of a popular sous vide machine. When Monica got injured, she wanted to make her own edibles to help cope with the pain, but feared that the smell would seep into neighboring apartments and anger the rigid building manager. So she began to experiment with the sous vide machine, which cooks vacuum-sealed ingredients in temperature controlled water baths, so “there’s virtually no smell,” she says. Lo’s blog Sous Weed now has hundreds of thousands of followers. Lo and Peabody worked together on the cookbook Sous Vide at Home and its forthcoming sequel, and Lo hopes to one day publish a cookbook of Sous Weed‘s recipes.

The last of the appetizers has been cleared, and the back of my tongue is starting to feel leaden. I slather blue cheese onto a cracker and silently thank Evans for providing so many normal snacks in addition to the dainty infused dishes.

Next up, the wine and cannabis aroma pairing. We pass around a fragrant grapefruit-scented Purple Tangie cannabis bud—but please don’t call it a bud, it’s a “flower”—to sniff along with a dry Rosé from Sonoma’s Ellipsis winery. Then it’s time for dessert: baklava with infused honey made by HoneyPot, the project of Felicity Chen. Chen’s mother is an asthma patient, and the mother and daughter had a ritual of drinking tea together on the weekends. Chen wanted her mother to sample CBD, a common active ingredient in cannabis known for its soothing effects. “But she was never going to smoke weed with me,” Chen says, laughing. “I’m a second generation Chinese-American—weed is like heroine for the Chinese!” Her mom agreed to try it in honey form, and now she uses it as a sleep aide, Chen says.

Most guests have departed by the time I talk to Magallanes, who looks a little drained from the evening. The chef says his interest in infusing meals with cannabis “was purely intellectual; I realized that it was an aspect of the food industry that was completely unexplored.”

“I’m not necessarily trying to avoid the flavor; it’s balancing the flavor properly so that it doesn’t overpower a dish,” Chef Michael Magallanes says.

How does he go about concealing the flavor of cannabis when he cooks? “I’m not necessarily trying to avoid the flavor; it’s balancing the flavor properly so that it doesn’t overpower a dish,” he says. “And using a certain strain so that the flavor you’re tasting from the cannabis complements the flavors you’re tasting from that dish.” For instance, for the rice cracker appetizer, he says, “the cannabis in that had a little bit of that nutty, sweet flavor going on. That can help balance the spicy acidity, and the earthiness from the cilantro.”

Like wine, he says, cannabis has dozens of flavor and aroma compounds that vary based on the soil and climate it’s grown in, and change with age. He envisions using cannabis in dinners the same way refined restaurants feature wine pairings. Though cannabis has an edge, he argues, and one that would seem especially attractive to a chef: As a diner, “when you get to a certain point where you’re drinking so much wine, you don’t remember those last two courses, you can’t taste the food as well,” he says. Whereas with cannabis, “if you eat the right amount and start feeling high, then by the end of the meal the dishes look better, they smell better, they taste better.”

Scientific research has corroborated the concept of the munchies. A 2014 study in Nature Neuroscience, for instance, showed how THC allows animals to smell more of their food and thus causes them to eat more. Another study suggests that the compound makes your brain produce even more dopamine than usual when you’re eating tasty food.

I left the event certain that Magallanes will have no trouble finding a market for his unique cuisine—especially in San Francisco, where recreational pot is now legal and the pursuit of good food is practically written into the local charter. And legalization’s jolt to the industry means that those who medicate with the plant but don’t like to smoke it will benefit from a cornucopia of new edible delicacies.

But for average diners less inclined to pay extra for the special kick, or those turned off by the herb’s flavor, take solace: Getting stoned at home and then going out to a nice dinner will afford you a pretty similar experience.