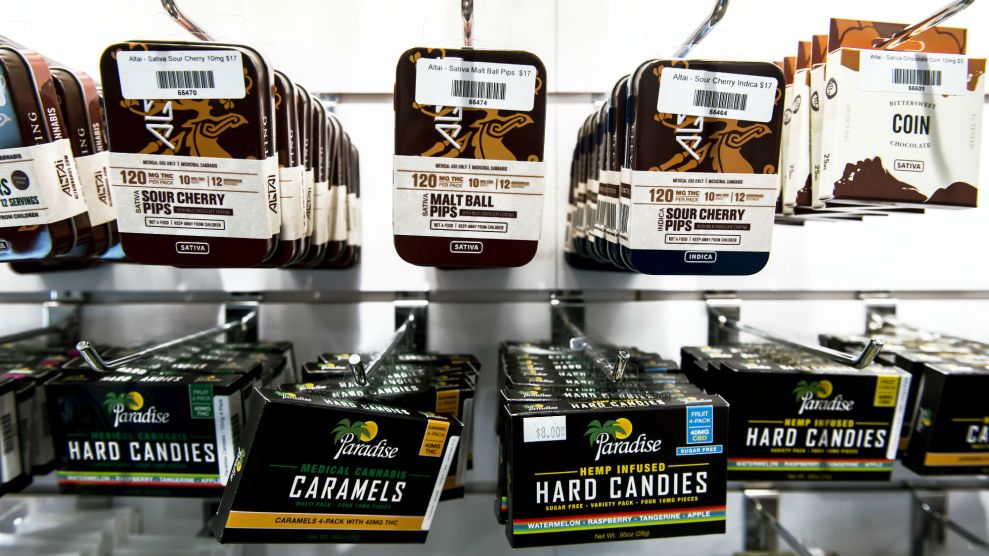 Edibles on display at a California marijuana dispensary Brian Cahn/ZUMA

David Downs is one of only a few cannabis news editors in the country. He runs GreenState, an online culture magazine powered by the San Francisco Chronicle. On a recent episode of Bite podcast, Downs gave me the run-down on cannabis-infused food, or edibles. These products are already generating hundreds of millions of dollars in revenue where pot is legal. The Specialty Food Association named edibles one of the top ten trends to watch in 2018. (Our conversation starts at 6:36 in the episode player below.)

With big corporations likely to join the edibles game, the market is in for some big changes, Downs told me. Here’s what you need to know:

You can put cannabis in almost any kind of food.

“The main active ingredient in cannabis is THC. It’s a molecule. It’s extremely small. It’s extremely potent. And it’s generally pretty lipophilic, which means it likes fats and it can dissolve in alcohols. You’re going to see this molecule be put in all manner of products now that you can manufacture these things legally.”

“Smoking has fallen out of favor here in California: We’ve slashed the smoking rates in California by 90 percent in some age groups, like teenagers. It’s obviously one of the biggest public heath victories of the last couple generations. With that context, edibles seem like a really good entry point into cannabis.”

And big corporations are watching.

“On the corporate side, you bet Frito-Lay is going to get in this space. They recognize the writing on the wall. Something like eight percent of Americans are regular cannabis consumers. Half of Americans have tried cannabis in their lifetime. That’s 20 million cannabis-minded tourists in California alone this year.”

“When Frito-Lay gets in the space, it’s not going to be like, ‘Frito-Lay Doritos with cannabis.’ They’re gonna go stealth. There’s Frito-Lay products at Whole Foods, but they’re under a different brand called like, ‘simple’ or ‘clean’ or something like that. I expect to see either people from those companies retire and then start edibles companies that are really squeaky-clean, or the companies themselves start an offshoot cannabis brand that’s linked to the parent brand.”

So, the edibles market may start to look a lot like the alcohol market.

“It’s analogous to alcohol, where you have Two-Buck Chuck on one end, and a $120 bottle of wine on the other. That’s going to apply to edibles. You’re going to have cheaper, more potent, more readily-available cannabis-infused foods on one side, and you’re going to have these super bespoke, high-end, luxury products—like the Défoncé chocolates made by a former Apple designer—that cater to people who want a full-on sensory experience and a sense of exclusivity, all the way up to high-end dinners that cost $300 and are multiple courses.”

“We’re at an extinction-level event for small edibles producers. They face tons of red tape at the local or the state level. In California, cities have zoned a tiny little bit of space for warehouses and thus created an artificial shortage of space and jacked up the prices for these little guys. And small businesses can’t get leases because they can’t afford warehouse space.”

“I expect 80 percent of the small edibles producers in the state to go out of business.”

“I expect 80 percent of the small edibles producers in the state to go out of business. It’s akin to when the asteroid hit the planet and the dinosaurs were here. There was all this diverse variety of life, that was wiped out and only a few, hearty species made it through—cockroaches, pigeons, algae, jellyfish—the really rugged creatures. That’s in the process of happening.”

If you store edibles at home, you will want to keep them away from the kids.

“Cannabis is generally safe, but I certainly have concerns around my kids accessing any cannabis products. For example, I have a sandwich bag that’s lockable and they can’t get in unless they have a combination.”

“We know of reports of Child Protective Services getting involved with people when kids show up at the hospital due to an exposure to a cannabinoid. These kids, they aren’t going to die. The general course of treatment is fluids and rest, but yet, the hospital often has a legal obligation to bring in the authorities, and Child Protective Services’ policy and discretion will vary by jurisdiction.”

And there are some minor health risks to be aware of.

“Edibles can take 90 minutes to two hours to take effect. In the interim, while people are waiting for those edibles to kick in, they get impatient and they start snacking more, and they overshoot the mark, and feel effects that are really strong and uncomfortable.”

“We ran a story on GreenState about using cannabis for anxiety, where the author, who is a psychiatrist, noted that sometimes the difference between anxiety relief and a really anxious bad experience is a little bit more than the head of a gummy bear.”

The good news is, you can’t lethally overdose on edibles, unlike alcohol.

“A lot of people will lose their lives to alcohol overconsumption or acute alcohol exposure this year, and we’re not seeing that in the medical history for cannabis.”