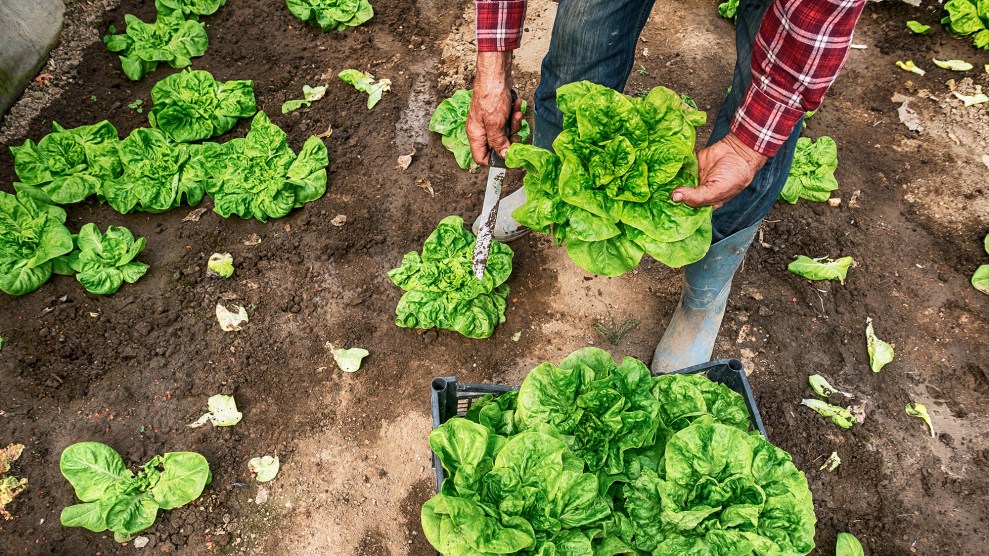 If you’re making a salad to go along with your dinner tonight, you should probably thank the farmworkers in California’s Salinas Valley, who produce about two-thirds of the country’s lettuce and much of its strawberries, tomatoes, and broccoli. When they head home to meet their families this evening, many of them won’t have the space to cook their own meals: A long-standing housing crisis has likely pushed tens of thousands of farmworkers into cramped and dangerous living conditions without adequate access to kitchens and bathrooms, according to a housing survey released Thursday by the California Institute for Rural Studies (CIRS) and the California Coalition for Rural Housing.

Surveyors found about 40 people lodged into a three-bedroom home with just two bathrooms.

Some farmworkers sleep in cars, motels, garages, converted school buses, and reportedly even chicken coops—which helps explain why 1 in 3 students in the Salinas school district are technically homeless. Many more share apartments with strangers, sometimes dozens of them, leading to public health concerns. The poor conditions have deterred some families from moving to the area or staying there, contributing to a worker shortage that has affected the ag industry’s bottom line.

Housing prices have skyrocketed in much of California in recent years, and the situation is dire for many of the 90,000 farmworkers in Salinas and neighboring Pajaro Valley, about 100 miles south of San Francisco. According to the survey of 420 workers, they earn an average of $25,000 a year per household, though a typical two-bedroom apartment in Salinas rents for $1,600 a month. Only 1 in 10 of them own a home or mobile home, and the rest rent, sometimes cutting back on food or medical care to cover housing costs. On average, more than seven people share a one-bedroom unit—though some apartments are more crammed: In one case, 40 people were lodged into a three-bedroom home with just two bathrooms, according to Ildi Cummins-Carlisle, a survey coordinator at CIRS.

And these aren’t all single migrant men. The survey found that most of the farmworkers are married immigrants who came from Mexico more than a decade ago and now live year-round in the region with their US-born children. Some parents teared up while describing their kids’ living conditions, like a father who worried about whether his daughters could safely use their home’s bathroom at night with dozens of strangers sleeping in the hallway and the living room. Kids sometimes have to wait so long for the bathroom they develop urinary tract infections, and when they get hungry, it’s often not possible to cook. One in five respondents of the survey didn’t have a kitchen.

Kids sometimes have to wait so long for the bathroom they develop urinary tract infections.

The worsening housing crisis comes amid a labor shortage in the world’s “salad bowl.” Farmers have struggled to recruit enough workers in part because of the federal crackdown on immigrants, as my colleague Tom Philpott has reported, and the lack of affordable and sanitary housing has exacerbated the situation, according to the researchers. “They can’t get people to move here, or stay here, because there’s nowhere for them to live,” says Cummins-Carlisle.

Millions of dollars worth of lettuce crops rotted in the fields a few years ago when Tanimura & Antle, a vegetable producer in Salinas, only managed to recruit about 200 of the 500 farmworkers it needed, so the company decided to build more designated housing for its employees. The $17 million complex opened in 2016, and after that the vegetable producer was able to fully staff its team. But the housing complex isn’t a cure-all—it’s only for employees, not kids, and many more rooms are needed. Although other ag families are working to build more housing for workers, the surveyors note that about 48,000 additional units of farmworker housing are needed to alleviate overcrowding. Subsidized, permanent housing will be key: There are currently only 1,207 year-round units in designated farmworker complexes in the region, far short of the 6,351 such units recommended.

On Thursday, government officials from Santa Cruz and Monterey counties met in the city of Salinas to discuss the problem with the researchers along with agriculture company representatives. “It was alarming to hear the statistics of the number of families living in overcrowded situations,” Mayor Maria Orozco of the city of Gonzales tells Mother Jones. She said city officials plan to talk with companies and nonprofits about how to follow Tanimura & Antle’s lead with the development of new housing, and to review city regulations in an attempt to streamline the process of building more units.

She hopes the high turnout at the summit in Salinas signals a shift in momentum to tackle the shortage of affordable rooms. “This is the first time I can remember seeing this issue at the forefront,” she says. “How that turns out, I don’t know,” adds Gail Wadsworth of the CIRS. “But there definitely was a commitment there.”