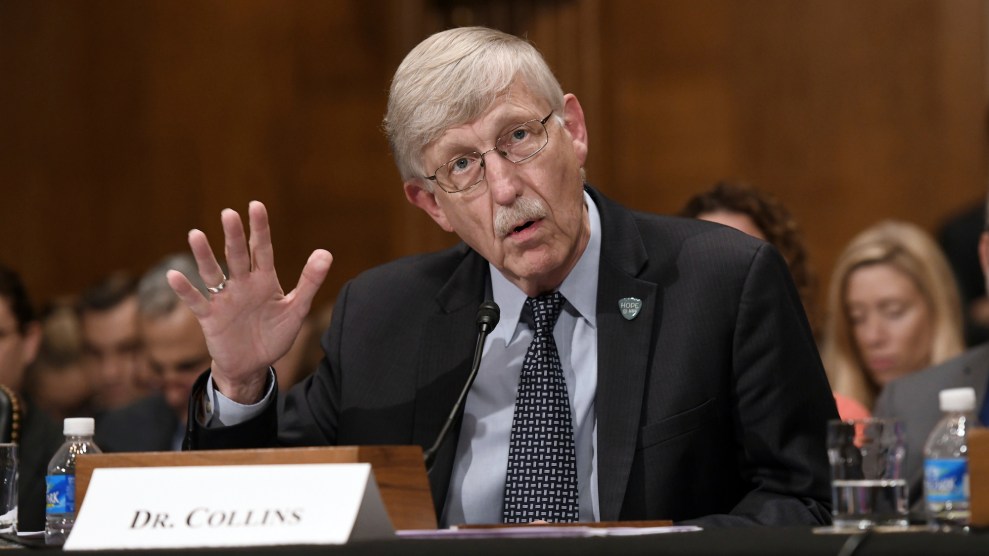 National Institutes of Health Director Francis Collins is under pressure from public health advocates to halt a $100 million study on alcohol and heart disease. Olivier Douliery/AP

Public health groups are putting pressure on the National Institutes of Health to shut down a controversial $100 million study of the alleged heart benefits of moderate alcohol consumption.

In March, the New York Times broke the news that officials at the National Institute on Alcohol Abuse and Alcoholism (NIAAA), a division of the NIH, had solicited funding for the Moderate Alcohol and Cardiovascular Health clinical trial, known as MACH 15, from some of the world’s biggest alcohol producers. Companies such as AB InBev, owner of Budweiser, and Diageo, the world’s largest spirits producer, donated $67 million to the National Institutes of Health Foundation to bankroll the study.

The trial was already controversial in public health circles because many of the researchers working on it had previously received funding from the alcohol industry. Critics have suggested the clinical trial was designed to result in a positive outcome for the industry. The Times story seemed to confirm those suspicions, noting that the NIAAA sent scientists to meetings with industry officials “where they gave talks strongly suggesting that the study’s results would endorse moderate drinking as healthy.”

Public health advocates have also attacked the MACH 15 trial on ethical grounds. Alcohol has been shown to cause seven different types of cancer, including breast and colon cancer. The MACH 15 trial would assign randomly selected participants to consume one drink every day for about six years to see whether they had lower rates of heart attacks and diabetes than participants who were abstaining. That amount of alcohol is enough to raise the risk of cancer slightly—according to the International Agency for Research on Cancer, it’d increase the risk of breast cancer by about 7 percent—but it’s not clear whether participants are being informed about the risk, says Michael Siegel, a professor at the Boston University School of Public Health. Because the study will run only six years, it probably won’t detect any increase in cancer rates, potentially skewing its findings about alcohol’s health effects.

Mother Jones recently documented the link between drinking and cancer and the decades-long effort by the alcohol industry to promote moderate drinking as healthy despite ample evidence of its harmful effects.

Following the Times story, public health advocates launched a campaign to urge the NIH to pull the plug on the study and for NIAAA Director George Koob to step down or be fired. A coalition of advocates led by the consumer rights group Public Citizen sent a letter April 11 to Secretary of Health and Human Services Alex Azar. The advocates, including the Campaign for a Commercial-Free Childhood, the Center for Science in the Public Interest, the National Women’s Health Network, and the Union of Concerned Scientists, demanded an inspector general investigation into the NIAAA’s solicitation of donations from the alcohol industry. The letter suggested that the NIAAA’s actions may have violated an NIH policy that bars officials from soliciting gifts from industry, particularly when those donations would generate research the agency would not otherwise conduct.

In addition, California-based Alcohol Justice has launched an “action alert” urging individuals to write to their elected officials and the NIH to demand a halt to the study. A spokesman for the campaign says it has generated hundreds of letters and emails to a range of officials, from House Speaker Paul Ryan (R-Wis.) to NIH Director Francis Collins.

Shortly after the Times published its story, Collins announced that the agency would investigate whether officials violated ethical rules in soliciting funding for the study. But public health advocates don’t think the NIH can be objective in the investigation. They have asked HHS and its inspector general to take the lead.

Koob’s close ties to the industry and his refusal to allow the NIAAA to fund research on alcohol marketing to young people have made him a particular target for advocates. “These circumstances indicate that rather than acting in the best interest of the American public, Dr. Koob has been acting at the behest of the alcohol industry’s interests,” Dr. Michael Carome, director of Public Citizen’s Health Research Group, said earlier this month. “The only way to excise this corruption from within the NIAAA and begin to restore public trust in the institute is for Dr. Koob to resign or be fired.”

The public health lobbying seems to be having an impact. On April 11, Rep. Lucille Roybal-Allard (D–Calif.), co-chair of the Congressional Public Health Caucus, grilled Collins about the study during a hearing on the NIH budget. In response, Collins indicated that the NIH task force formed to investigate the study would also look into whether Koob improperly declined to fund research unpopular with the alcohol industry. As for the study, he said, “We are looking into this in a very aggressive way.”

The task force report is due in mid-June. Meanwhile, the clinical trial continues to recruit drinkers around the world.