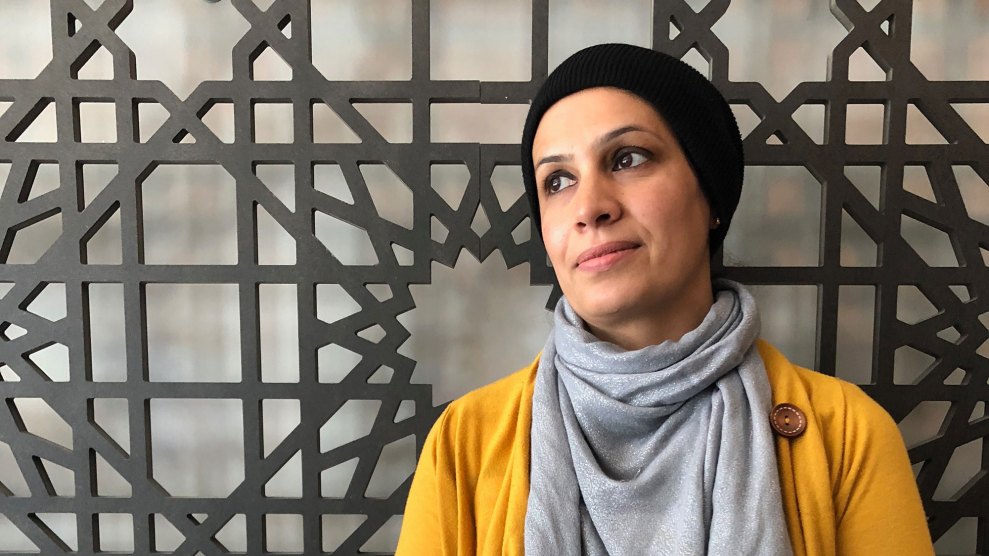 If there’s one thing 15-year-old Noor Anaee has noticed about her new country, it’s that not many Americans cook. We are seated on her couch next to her mother, Muna, in the Anaees’ modest, second-floor Oakland apartment. “They order food instead of making it because they don’t have time,” Noor observes. Back in Baghdad, where she was born, meals were an important fixture of the day, drawing relatives together. “When we make food, we don’t make a little bit of food, we make a lot of food. So it can feed the whole family,” Noor says.

In Baghdad, Muna cooked savory dolmas (stuffed grape leaves), chicken kabobs, green rice, spicy sweet pepper salads. “I love cooking, you know,” Muna said. “I love.” The 45-year-old never saw it as her profession—it was just something she did for her family and friends, in between her work as a kindergarten teacher and raising Noor and her younger brother Abbas, who spent their time playing soccer in the streets with their cousins.

Listen to this story starting at 18:48 in the episode of Bite podcast below.

But as the political situation in Iraq worsened, Muna and her husband Talib began to worry about their family’s safety. “Every day there’s a big explosion there,” Muna remembers. One day, Noor stopped at a corner store on her way to school to buy some snacks. “I remember a car going by and there was just like guns shooting up in the sky and everybody was so scared. I just hear things going by me like falling. I just see my parents worried, looking at me, they were like, ‘Are you okay, are you okay, what happened?’” Noor recalls. “I didn’t know what was going on. I was just like, it’s a regular day for me. I was just going to go to school.”

“I remember a car going by and there was just like guns shooting up in the sky and everybody was so scared.”

The Anaees had some family members working with American media outlets, which made it easier for them to apply for asylum in the United States. They managed to get refugee visas for the whole family, and in March of 2013, they were placed in Oakland.

The Anaees are probably lucky to have not waited any longer. These days, the United States is admitting fewer refugees than before. After temporarily banning admissions from certain countries altogether, the current administration has now enacted extra security screenings for refugees from 11 countries, including Iraq. As the San Francisco Chronicle reported last week, California only admitted 800 refugees over the last six months, compared to more than 4,500 it received during the same time period last year. Only 10 of them came from Iraq.

As Muna prepared to move across the world back in 2013, she remembers thinking: “What am I going to do? It’s different life, it’s different country. I don’t have a friend, I don’t have family there. But you know, day by day, after four months, we were okay.”

Muna got a job at a preschool, and she also enrolled in ESL classes. It was during an English class that she introduced her classmates and teacher, Don, to her kabobs and shawarma. “He said, ‘Oh, Muna: Your food is amazing,’” Muna remembers, beaming. He encouraged her to start a business, and so she began preparing larger batches and selling some of it through the school’s network.

And the fact that Americans don’t really have time to cook has given Muna a key advantage, Noor explains: “She thinks it’s an opportunity to make food for others because they can buy it and she can make a business out of that.”

“I hope I open a restaurant soon,” Muna says. “Inshallah.”

And this week, Muna will bring her pillowy spiced flatbreads, creamy hummus, and various meat dishes to a couple of high-end San Francisco restaurants. She was selected to participate as a featured chef in the Refugee Food Festival, after her ESL teacher heard about the event and reached out to its local organizer, Sara Shah.

The festival launched in Paris in 2016 as a part of a collaboration between a local NGO and the UN Refugee Agency, with the goal of using “the power of food to debunk the negative image surrounding refugeeism.” This year, it will feature pop-up dinners at restaurants in 14 cities around the world; San Francisco and New York are the only participating US cities. Muna will whip up dinners at San Francisco’s Tawla restaurant on June 20, and at Son’s Addition on June 22. (Diners can make normal reservations at these restaurants for a chance to try her fare).

Directions
Remove all of the fat from the raw chicken breast and slice diagonally into slabs, using a sharp knife. Then slice each slab into ½ inch wide slices. Put chicken into a wide bowl and add all of the spices, yogurt, and olive oil. Cover and let marinate for 3-4 hours in the fridge.

Heat 3 tablespoons olive oil in a large skillet, and wait 2-3 minutes until it’s hot. Pour chicken in its sauce onto the pan, and cook until the juices have evaporated and the chicken is cooked all the way through. Sprinkle with sumac and cilantro leaves. Serve with flatbread, hummus, and a spicy salad made from hot and sweet peppers.