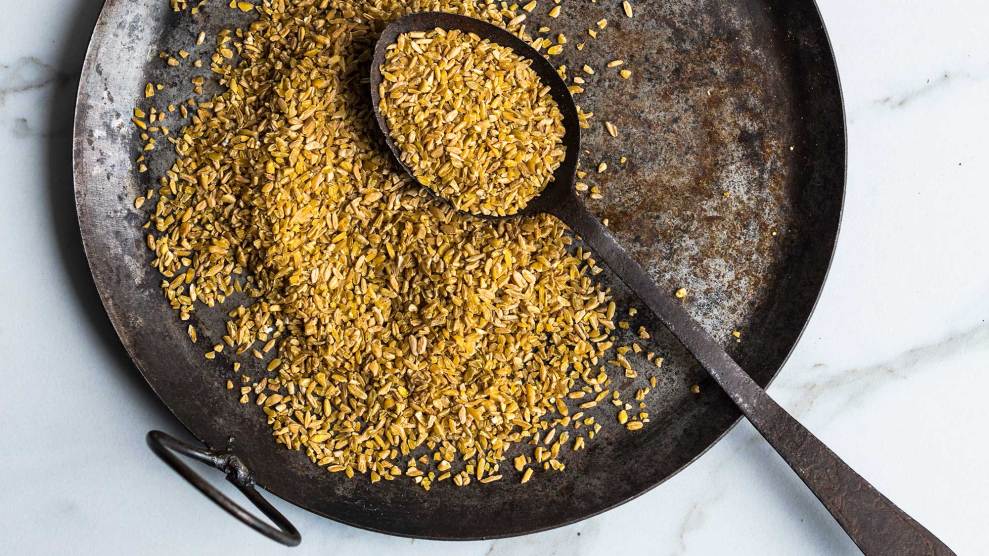 Freekeh may sound like some punishing gruel savored only within the confines of hippie communes, circa 1976. But don’t let the name freak you out. Consumed throughout the Eastern Mediterranean at least since the 13th century, freekeh is the unripe, toasted grains of an ancient wheat variety called durum—and it’s “exquisitely good,” as the Middle Eastern food expert Anissa Helou observes. (Here’s a concise description of its history and how it’s processed.)

The flavor is nutty and slightly smoky, and more appealing on its own than any other grain I know of, even my beloved farro. (In fact, my “Farro Recipe Generator” can be adapted for freekeh.) And it’s said to be a nutritional powerhouse—it trumps quinoa and brown rice in protein and fiber content per serving.

Freekeh is traditionally served alongside poached chicken after being simmered until tender in the resulting broth; here’s a classic Anissa Helou recipe for that excellent dish. I’ve been cooking it as if it were rice and using it as the basis for grain salads, which I love to have in the fridge for quick summer meals. Grains like freekeh make an ideal canvass in both texture and color for summer vegetables—green herbs, yellow squash, red tomatoes, and purple eggplant all pop against a freekeh background.

A recent trip to the farmers market yielded yellow patty-pan squash and parsley, which I transformed into a freekeh salad. All it was missing, I decided, was fresh mint, so I’m recommending adding that as well. Some crumbled feta cheese would also be a delicious garnish; a few toasted and chopped almonds or walnuts would add welcome crunch.

Place a medium-sized, heavy-bottomed pan with a tight-fitting lid over medium-high heat and add the freekeh. Let it toast, swirling the pan or stirring, for a couple of minutes, until the freekeh becomes fragrant. Add the water and salt and bring to a boil. Reduce the heat to low, cover the pan, and let it simmer until the water has been absorbed, about 20 minutes. Let it sit for another 10 minutes, off-heat and covered.

Dump the cooked freekeh into a large bowl.

Meanwhile, while the freekeh is cooking, place two tablespoons of olive oil in a large skillet, set heat to medium, and add the chopped onion. Cook, stirring often, until the onion is translucent. (If it starts to scorch or brown, ease up on the heat). Add the garlic, and cook, stirring, for about another minute (until the garlic releases its aroma but before it burns), then add the squash and a pinch of salt. Toss it well to coat, and then allow the squash to cook, stirring often, until it’s slightly tender but still has a light crunch.

Dump the cooked squash into the bowl with the freekeh. Add a good dash of salt and pepper, the remaining tablespoon of olive oil, the lemon juice, and the chopped herbs. Toss gently until it’s well mixed, and taste, adding more salt and pepper if desired.