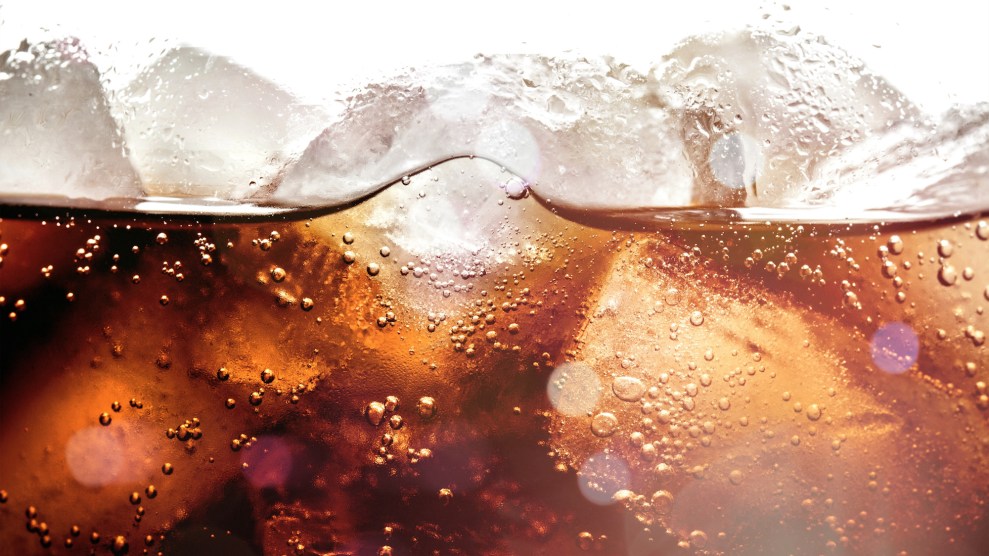 Back in November 2016, the soda industry got iced at the ballot box in California. Voters in three Bay Area municipalities—San Francisco, Oakland, and Albany—passed hefty taxes on sugary drinks. In doing so, they joined Berkeley, which had approved a similar measure two years before. The sugary drinks industry burned nearly $25 million campaigning against the 2016 measures, the San Francisco Chronicle reported.

Last week, Big Soda got its revenge. California Gov. Jerry Brown signed into law a bill prohibiting counties and cities from enacting any new taxes on grocery items—including sugary beverages—until January 1, 2031. The bill grandfathers in previously passed taxes like the ones in the Bay Area; but it prevents any another California locality from passing one for another decade.

“The industry is aiming basically a nuclear weapon at government in California and saying, ‘If you don’t do what we want, we’re going to pull the trigger and you’re not going to be able to fund basic government services.’”

Brown might seem like an odd apostle for Big Soda’s interests in Sacramento. But as this great Kaiser Health News piece shows, he had little choice, due to some bare-fisted power politics by the industry. Big Soda’s power play involved the state’s ballot initiative system. In California, any initiative or proposed constitutional amendment that garners a minimum number of signatures will be put to a statewide ballot for consideration of voters.

As my colleague Kevin Drum points out, “Most initiatives these days are funded by corporate interests, not the grassroots, and corporate interests don’t really need yet another avenue to work their will on the public.” When grassroots groups do generate ballot initiatives, corporate trade groups have the deep pockets to fund campaigns that can crush them. The American Beverage Association, a trade group dominated by soda giants Pepsi and Coca Cola, came up with a doozy of a state-wide ballot initiative back in January: the Tax Fairness, Transparency and Accountability Act. Essentially, the industry used a ballot initiative as leverage to force the state legislature and governor to do its bidding on soda taxes.

Big Soda’s ballot proposal would have made it much more difficult for towns and cities to increase any taxes at all, not just levies on sugary drinks. Here’s what it would have done, per Kaiser Health News.

It sought to increase the voter threshold for cities and counties to levy taxes and fees from a simple majority to a two-thirds vote. It also would have required a two-thirds majority for tax and fee votes by local governing bodies, such as city councils and county boards.

It was a tactic intended to make it harder for cities to get the votes for new taxes on soda, which has been a growing target of public health advocates and local governments across the country. But the initiative also would have affected new taxes and fees for libraries, public safety and other government services, triggering fears among local governments and unions that they might not be able to raise the revenue they need in the future.

The American Beverage Association, the industry’s trade group, demonstrated it was willing to open its wallet to promote the initiative—it spent more than $7 million promoting it, vs. just $525,000 raised by opponents, which included the League of California Cities and the California branch of the Service Employees International Union. In California, lavishly funded ballot campaigns can bombard the radio and television airwaves and win even when their policy goal isn’t particularly popular.

Enter Assembly Bill No. 1838, authored by the State Assembly budget committee, which offered a much narrower approach to new municipal taxes than the ballot initiative. Rather than make it extremely difficult to raise any new tax, it proposed to ban any new taxes on grocery items for the next dozen years. Here’s how one state senator describes the situation to Kaiser Health News:

“The industry is aiming basically a nuclear weapon at government in California and saying, ‘If you don’t do what we want, we’re going to pull the trigger and you’re not going to be able to fund basic government services,’” said state Sen. Scott Wiener (D-San Francisco). “This is a ‘pick your poison’ kind of a situation.”

On June 28, a decision had to be made—it was the last day that the ballot initiative could be withdrawn, under California law. That afternoon, the California Assembly passed Bill No. 1838 and Brown signed it, in what was essentially a “last-minute, quid pro quo deal” to stop the initiative battle, Kaiser Health News reports. The American Beverage Association withdrew its ballot initiative just ahead if the deadline, and just after Brown signed the bill. Now California cities won’t have to win super-majorities to raise funds for operations—but they also can’t pass new soda taxes for a dozen more years.

Meanwhile, research implicating sugary drinks in health troubles like type 2 diabetes keeps piling up—as does evidence that soda taxes effectively ramp down consumption. No wonder Big Soda is so intent on crushing them.