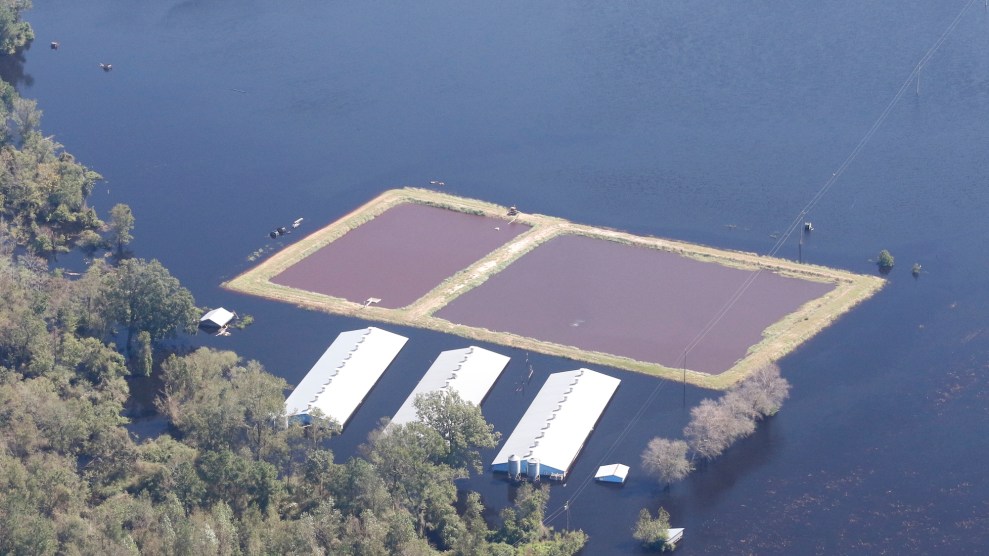 Floodwaters from Hurricane Florence are starting to recede, but they’re still making a fetid mess of North Carolina’s coastal plain, with its dense assemblage of rivers, confined hog and chicken farms, and hog-manure “lagoons.”

In the new episode of Bite podcast, we plunge into the muck of post-Florence in eastern North Carolina.

First, we hear from Matthew Starr, the Upper Neuse Riverkeeper for Sound Rivers, which is part of the Waterkeeper Alliance. Starr describes what Waterkeeper-allied pilots are seeing from the air as they survey the wreckage, taking photos for the group’s extraordinary Flickr feed.

Then retired farmer Craig Watts—who until January 2016 grew birds under contract with giant chicken company Perdue—talks about what it’s like to grow hundreds of thousands of chickens near the North Carolina coast. Watts guided his last flock of birds to slaughter weight months before Hurricane Matthew pounded the region, but “I’ve been through this drill before,” he tells me. Watts vividly describes the stress and financial risks faced by contract farmers during these increasingly frequent catastrophes.

As of noon on Thursday, 30 pits filled with hog waste were leaking a slurry of raw hog feces and urine into floodwaters, and many more were threatening to overflow.

Meanwhile, as of noon on Thursday, five of those cesspits had incurred structural damage from flooding, 30 were leaking a slurry of raw hog feces and urine into floodwaters, 21 were completely inundated, and 40 were filled to capacity and likely to start leaking soon, the North Carolina Department of Environmental Quality reports. And according to the latest press release from the North Carolina Department of Agriculture and Consumer Services, issued Wednesday, 3.4 million poultry and an estimated 5,500 hogs had died in flooding.

In the press release, state Agriculture Commissioner Steve Troxler called the storm “unprecedented” and noted that “agricultural losses will be significant because the flooding has affected the top six agricultural counties in our state.” But he also admitted that Florence does in fact have a precedent—one that’s just two years old: “The footprint of flooding from this storm covers much of the same area hit by flooding from Hurricane Matthew in 2016, which only worsens the burden on these farmers.”

This one, a photo snapped taken Wednesday, shows a hog operation after floodwaters had receded, bearing away the contents of its manure lagoon. The three white structures are indoor hog barns, and the tar-colored rectangle is an empty lagoon. At its top right, you can see the breach through which the liquid excrement had flowed away.

This one shows a hog operation with multiple barns and three lagoons, two of which survived the flood and one of which didn’t. In the empty one, what only be called a shit creek has formed, though which the pit’s contents drained down the hillside.

Here’s a close-up of the busted lagoon in the above shot:

This one, taken Wednesday, shows a poultry operation partially underwater. Typical industrial-scale chicken barns contain as many as 40,000 birds.

As I showed in this post, these manure-leaching catastrophes are taking place in a region whose population is disproportionately black and Native American and whose median income lags behind the rest of the state. And concentrated-livestock production isn’t the only dirty industry they have to endure. The regions also houses several coal ash ponds, which store the leftovers from coal production. Coal ash contains arsenic, lead, mercury, cadmium, and other toxic metals.

And now, some ash ponds as Duke Energy’s H.F. Lee coal-fired power plant near Goldsboro, North Carolina, are inundated and leaking, the company acknowledged in a Thursday press release. The company claimed that “only a small amount of coal ash has been displaced.” But Donna Lisenby, Global Advocacy Manager for Waterkeeper Alliance, said in a Thursday statement that the group’s aerial photos shows that “flood waters are actively eroding the dam between” several ponds and “all three ponds are washing coal ash into the Neuse River.”