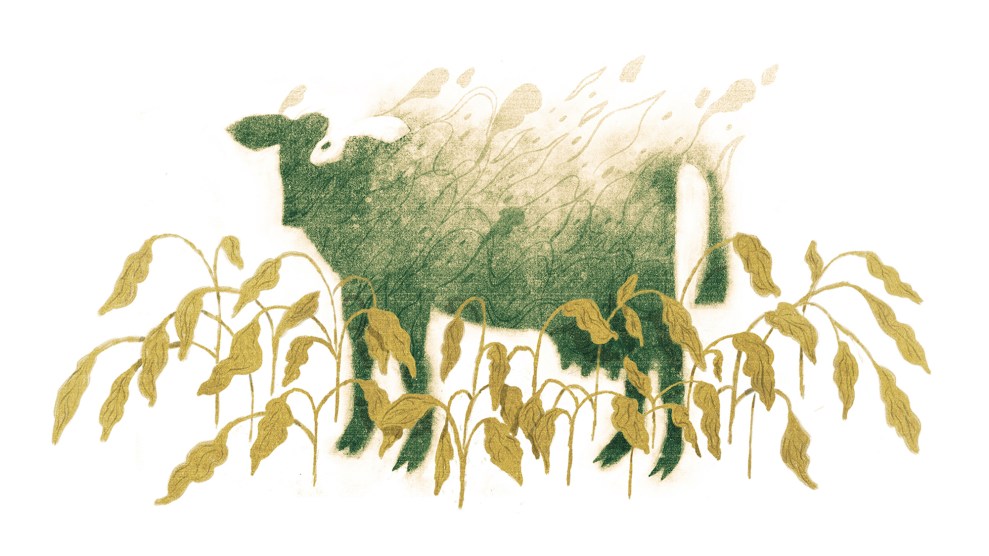 Last October, scientists convened by the United Nations issued a dire warning: Unless carbon emissions fall by about 45 percent by 2030, we will face a world of climate chaos—more frequent droughts and floods, decimated coral reefs, and cities swamped by rising seas. Soon after, the Trump administration quietly released a similarly terrifying report from US government scientists, who estimated climate chaos will cost the country more than $500 billion annually by the century’s end. The president’s response? “I don’t believe it.”

Frankly, all this news made me want to stress-eat a giant steak and succumb to a food coma. But a spate of new studies have argued that cutting back on meat—way back—can help our climate enormously. Americans now eat a staggering 216 pounds of meat annually per person, nearly triple the global average. Even our appetite for beef, which fell during the Great Recession, has crept back up, and we eat more of it per capita than almost any other country.

A move to a “flexitarian diet” would help the world cut food-related emissions by 52 percent, giving the climate a shot.

On our current path, emissions from food production could surge by 87 percent by 2050, “reaching levels that are beyond the planetary boundaries that define a safe operating space for humanity,” according to a major study recently published in Nature. “Even if we completely decarbonize the energy system, we would still really need to tackle the emissions that are associated with the food we eat,” says Oxford University researcher Marco Springmann, the lead author of the study.

But don’t panic: Despite conservative scaremongering, we don’t all have to become vegetarians to put us on a sustainable path. If US consumers cut back their meat habit by about 40 percent, as recommended by the World Health Organization, to just under six ounces a day per person, they’d be doing their part to slash global food-related emissions by nearly a third. A move to a “flexitarian diet”—1.5 ounces of meat a day, or about three hamburgers-worth a week—would help the world cut these emissions by 52 percent, giving the climate a shot.

In January, a report by 37 scientists (including Springmann) representing 16 countries and a major medical journal, titled the EAT-Lancet Commission on Food, Planet and Health, upped the ante: It argued that American-style meat consumption not only helps drive climate change, but also contributes to the burden of chronic diet-related disease. The resulting recommended diet is very similar to the Nature paper’s flexitarian vision: low on red meat, and high on beans, whole grains, fruits, and vegetables.

The meat industry was not amused. The National Pork Producers Council said the report was “based on dubious science” and “irresponsible,” while the American Feed Industry Association denounced its “radical policy recommendations.”

“Move away from talking about what’s missing.”

In early April, Burger King introduced the Impossible Whopper, a Silicon Valley-funded soy-protein patty goosed with heme, a blood-imitating molecule that’s synthesized without animal products. The company hopes its meat-like taste will woo burger lovers into paying an extra dollar. And it isn’t marketing the burger as healthy or ecologically friendly; the pitch, rather, is that it tastes just like a beef Whopper.

Hear more about the climate cost of meat on the latest episode of Bite:

Fast-food chain Sonic Drive-In is taking a similar approach. For its Signature Slingers, burgers made of 75 percent beef and 25 percent mushrooms, Sonic skipped the environmental spiel and boasted instead of a “juicy, flavorful patty that is almost too good to be true.”

Vennard and his colleagues estimate that replacing a third of the beef with mushrooms in the 10 billion burgers we eat annually would be like taking 2.3 million cars off the roads. But marketing alone won’t cut it. We need regulation. Several European countries have weighed a meat tax. Springmann calculated that here in the United States, a 160 percent tax on processed meat like ham and salami could slash consumption by a quarter. You could still enjoy the occasional bacon cheeseburger, but a daily habit would become far less appetizing.