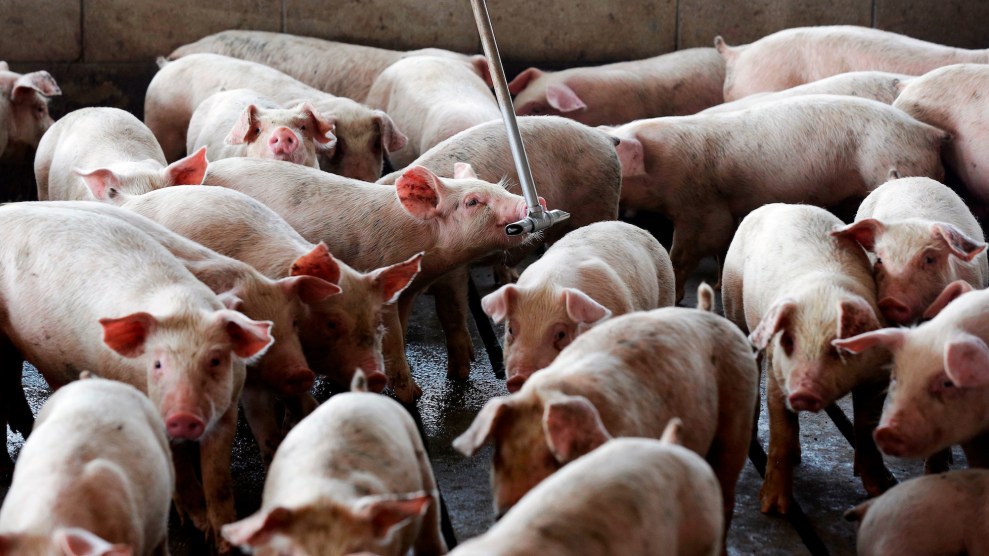 After yet again ramping up his trade war against China last week with a new round of tariffs on Chinese goods, President Donald Trump quickly took to Twitter to assure our “Great Patriot Farmers” that he would shield them from the fallout. Soon after, US Department of Agriculture chief Sonny Perdue announced that the president had directed him to “work on a plan quickly,” adding that “@POTUS loves his farmers and will not let them down!” Trump later hinted he would come up with “about $15 billion” in public funds to offset the losses expected due to retaliatory tariffs on American exports. No details of the new aid package have been released.

This promise comes on the heels of the $12 billion “trade mitigation package” the administration rolled out last year to assist farmers “suffering from damage due to unjustified trade retaliation by foreign nations.” To finance the tariff reimbursement program, Trump and company reverted to grabbing funds from a USDA agency launched during the Great Depression to stabilize crop prices for farmers. The response from farm country to the trade war and Trump’s attempts to salve its effects can be summed up by a recent statement from Roger Johnson of the National Farmers Union, who expressed appreciation for the short-term assistance, but added that “such temporary solutions are not sufficient to address the permanent damage the trade war has inflicted on agricultural export markets.”

As Trump prepares to disperse more cash, it’s worth pointing out where some of the president’s past bailout funds ended up: Into the hands of one of the globe’s most massive multinational agribusiness companies.

“Why is the USDA bailing out plants operated by JBS, the largest meatpacker in the world, with a program designed to help domestic companies and producers under economic duress?”

Most of last year’s $12 billion trade mitigation package was devoted to delivering cash to growers of commodities the USDA deemed most affected by the trade dispute, mainly soybeans and live hogs. A smaller amount, around $1.2 billion, was directed towards buying up finished food products that might otherwise have been exported to China, and distributing them to schools and other public institutions in the United States. About half of those funds—$559 million—went to buying back pork.

In January, the Greeley, Colorado Tribune reported that as part of the trade-bailout package, the USDA signed contracts to purchase $22.3 million of that pork from JBS USA, the American arm of JBS, a gigantic Brazil-based meat company that owns massive shares of the US beef, chicken, and pork markets. The news drew outrage. The Organization of Competitive Markets, a farmer-led group that organizes against corporate control of agriculture, circulated a petition calling for a halt to sending cash meant for struggling farmers to “global meatpacking corporations.” Undaunted, the USDA has signed two additional contracts to buy JBS pork with bailout funds, the environmental advocacy group Food and Water Watch points out: one on Feb.15 for $14,522,880 and another one on May 2 for $25,614,708.40.

“Why is the USDA bailing out plants operated by JBS, the largest meatpacker in the world, with a program designed to help domestic companies and producers under economic duress?” said Tony Corbo, a senior lobbyist for Food and Water Watch. “This company does not seem to be hurting.” In an emailed statement, the USDA’s Agricultural Marketing Service, which administers the program, wrote that the agency “buys American commodities, produced on American farms by American farmers…regardless of who the vendor is, the products purchased are grown in the US and benefit US farmers. JBS qualifies as a bidder under this criteria.”

Just as Trump was shoveling bailout money to JBS, the Center for American Progress released a report finding that because big buyers like JBS dominate the market, farmers face a paucity of choices to market their hogs. JBS is one of four companies that slaughter more than two-thirds of US-grown hogs, and their buying power “not only holds down the prices that hog farmers get for their product, but affects the entire nature of their operations…forcing them to take on burdensome debt, accept low prices derived from opaque formulas, and assume risky liabilities,” the CAP report states. Soon after taking office, Trump had a chance to sign an Obama proposal to rein in the power of the big meat packers called the Farmer Fair Practice Rules, which I explained here. He nixed it instead.

And just as JBS’ US pork arm is being handed bailout money, its Brazil operations are managing to cash in on the US-China trade spat. China has already started to shift its meat purchases to Brazil to punish the United States. After JBS’ CEO told investors that growing demand in meat from China would boost its profits this year, the company saw its share price jump in late March. A JBS exec told investors the company “may also re-direct some pork production from the United States to China if demand warrants,” Reuters reported. On Monday, JBS reported first-quarter profits 2019 of $273 million, with nearly a quarter of its exports going to its biggest customer, China.

A China-based company was getting taxpayer cash to buffer it from Trump’s trade war with China.

Last year, the USDA also agreed to buy $240,000 worth of pork under the bailout from another enormous corporation that exports to China, Smithfield Foods, which is owned by China-based meat conglomerate WH Foods. So a China-based company was going to get taxpayer cash to buffer it from Trump’s trade war with China. After public outrage, Smithfield quietly terminated the contract.

Until hostilities broke out last year, China was the biggest overseas market for US farm goods, particularly soybeans and pork. And the places where these soybeans and hogs are grown tend to solidly support Trump. So a trade war against China means a direct economic attack to the president’s turf on the electoral map. Handing cash to a multinational corporation already benefiting from the trade war seems like an odd way to address these self-inflicted problems.