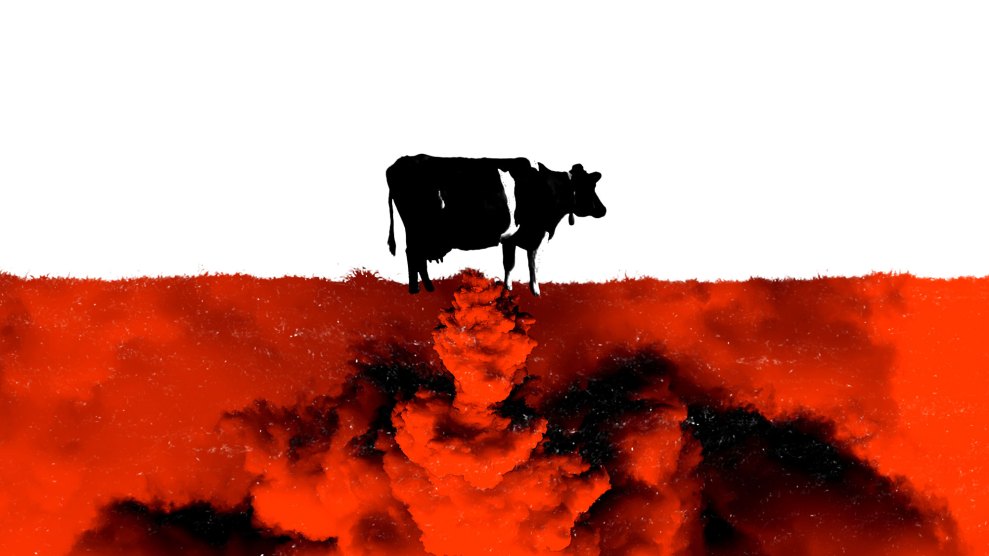 Rancher Loren Poncia counts roughly 500 glossy Angus beef cattle, 350 sheep, and 19 hogs among his brood at Stemple Creek ranch, a scenic stretch of sandy rolling hills dotted with bony Eucalyptus trees near the Pacific Ocean in Tomales, California. The animals have brought Poncia acclaim: Stemple Creek’s organic meats fetch top dollar at nearby markets and at restaurants as revered as Berkeley’s Chez Panisse. But these days, Poncia’s attention has turned to some different critters. They number in the billions, and they live underground: soil microbes.

Poncia uses a technique with his cattle known as managed rotational grazing. The herd munches on a piece of pasture for a set period of time. Then, with the prodding of some electric fences, they move to another patch of grass so the last patch can recover and regrow. “We try and mimic what mother nature did in the great plains,” Poncia says, “where there was huge herds of bison that would migrate across the great plains and they’d eat the grass in front of them, stomp on the grass below ‘em and poop on the grass behind ‘em, and it would really regenerate the soil every year and make a really good ecosystem for perennial plants.”

The grasslands suck up carbon dioxide through the process of photosynthesis. And the more life the soil contains, the more it can help break down that CO2 and store it as carbon, deep underground. By practicing a type of agriculture known as regenerative ranching, Poncia wants to coax his rangeland to grow more than just grass: He hopes to produce acres of forbs—deep-rooted flowering perennials—like chicory and plantains. Perennials, Poncia explains, “photosynthesize year round, and when they’re photosynthesizing, they’re capturing mother nature’s free energy and storing it as carbon in the soil.”

Visit rancher Loren Poncia and hear from scientist Rattan Lal on the latest episode of Bite:

Farming, ranching, and deforestation produce about a quarter of the world’s greenhouse gas emissions. But agriculture also has the potential to help remove those emissions, at least temporarily, through the creation of natural carbon sinks in grasslands, trees, and cropland.

How much carbon could the world hope to sink? Rattan Lal, a soil scientist at Ohio State University and director of the Carbon Management and Sequestration Center, has been pondering this question for decades. For a paper he published with his team in 2018, he estimated that global soils can recapture about 2.5 to 3 gigatons of carbon a year, roughly the equivalent of taking more than 2 billion cars off the road, and just under a third of what would be needed to neutralize the world’s annual carbon dioxide emissions from fossil fuels and industry. (A gigaton is the same as one billion metric tons. And one ton of carbon is equal to to 3.67 tons of carbon dioxide). When Lal’s team combined that number with the forests’ ability to suck up about the same amount, they projected that we may hope to sequester around 333 gigatons of carbon in all terrestrial ecosystems by the end of the century, the equivalent of drawing down atmospheric carbon dioxide emissions by 156 parts per million.

Coming up with a large-scale estimate is slippery, given all of the factors involved. For one thing, the soil can only sequester so much carbon before reaching a saturation point; what that threshold is and when it is reached depends on the region of the world, the type of land, and how people have treated that soil in the past.

Research led by biochemist Jonathan Sanderman of the Woods Hole Research Center used a massive historical data set to find that we’ve lost a cumulative 133 gigatons of carbon in the soil over the past 12,000 years due to agricultural land use, on par with what we’ve lost from deforestation. It has long been assumed that if we can restore all of the soil in these native ecosystems, we might potentially recapture around two thirds of the carbon lost, which would be 88 gigatons, by the end of the century.

But it would be nearly impossible to reclaim so much land and convert it back to its wild state. Sanderman’s team took a pretty conservative approach in its calculations. Based on the assumption that we’ll have to resort to sequestering carbon mainly in land that we’ve already messed with, and assuming the soil might reach a carbon saturation point in 20 years, Sanderman posits that under best management practices, the best we could hope to recapture is 0.4-1.4 billion metric tons of carbon a year—or up to 28 gigatons by century’s end. That’s still a pretty big dent. That would be like shutting down 26,372 coal-fired power plants for a year.

But even that number strikes Sanderman as optimistic. “All of these estimates assume that everyone around the world adopts new behavior and new technologies,” Sanderman adds, “not only adopts it, but does a good job of adopting it. That’s a very tenuous assumption.”

And no assumption about cattle ranching and carbon drawdown can ignore the animals’ emissions of methane, another potent greenhouse gas. (Read our piece on the exciting potential of seaweed to help solve this problem.)

Stemple Creek ranch is now part of an experiment with the Marin Carbon Project, whose researchers have helped him draw up a “carbon farming plan” and take soil samples. Poncia still hasn’t received the data that would tell him exactly how much carbon his land has sequestered. Either way, he plans to continue regenerative ranching: “It’s better for the land, it’s better for the animal, it’s better for the consumer eating the product, and it’s better for the environment,” he says. If he can help prove that the model’s successful, he says, “more and more people are going to have opportunity to eat good meat, and at the same time, it’s going to regenerate the soil and help solve global warming.”