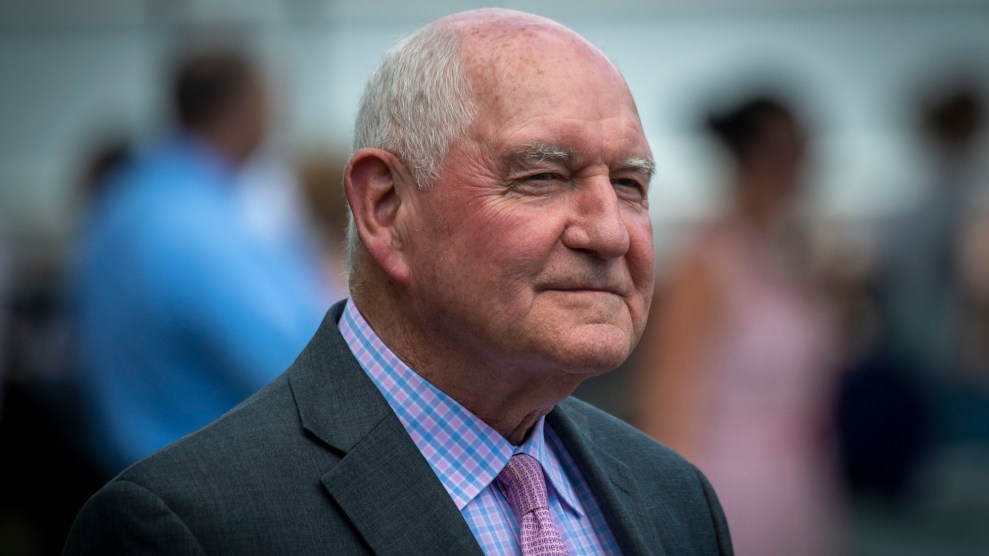 Department of Agriculture Secretary Sonny Perdue maintains a, well, sunny view of the current farm economy. “I don’t think there could have been a better time to be in agriculture than today, I really mean that,” he recently mused on his podcast, The Sonnyside of the Street. In the latest episode, “Do Right and Feed Everyone,” Perdue chatted with veteran farm broadcaster Max Armstrong. “I’m bullish on agriculture—with the diversity, with the opportunity of e-commerce and direct sales,” Perdue gushed. “People are still fascinated with the way food is produced!”

Armstrong mostly played along with Perdue’s schtick, but at the end of the interview, he pushed back: “What do you say to that younger operator who entered this industry maybe five, six, seven years ago, and doggone it, things have gotten a lot tougher?” Armstrong asked, adding: “This is long, dark tunnel for them.”

The question wasn’t frivolous. Away from Perdue’s recording studio, the farm economy is circling the drain. The trade war initiated by Perdue’s boss, President Donald Trump, shows no sign of abating. Prices for corn and soybeans—by far the two biggest US crops—hover near or below farmers’ production costs. Cotton farmers and winemakers are also being slammed by the trade war, and dairy farmers are in the grip of a long and brutal slump. Then there’s climate chaos: Record rains in the spring delayed planting through much of the Midwest, and early blizzards slammed the fall harvest. (Here’s a report from the ground I did for Bite podcast.)

The Trump administration has responded to its trade mess by essentially parachuting cash into farm country, handing out $12 billion to farmers hurt by the trade war in 2018 and another $16 billion this year. In 2019, trade aid and other government programs will account for nearly 40 percent of farmer profits, according to the American Farm Bureau Federation. As trade talks flounder, “a third round of payments for farmers increasingly is seen as inevitable, particularly if a trade deal with China is not reached soon,” the Washington Post reported Tuesday, citing anonymous sources within the agriculture department.

Despite the influx of government cash, conditions are so bad that the farm economy is tanking anyway. Farm bankruptcies spiked 24 percent in September, compared to the same month a year before. With debt loads rising and commodity prices stuck in the mud, conventional agriculture banks are “placing stricter terms on farm loans and doling out less money,” the Wall Street Journal reported Monday. As a result, farmers are increasingly turning to “more lightly regulated entities” for financing to buy the season’s seeds and chemicals. These new-wave banks offer loans with “interest rates double those of traditional farm banks,” the Journal added—putting farmers at risk of catastrophic losses if the season goes badly.

While data on farmer suicides are scant, there’s evidence of an uptick amid all the debt and bankruptcies. In a wrenching article published this week, the Washington Post’s Annie Gowen reported that “leaders and social workers in rural America say that, anecdotally, they’re seeing more” suicides, and calls to crisis hotlines are rising. Gowen goes on to tell the story of South Dakota’s Chris Dykshorn, who, as financial troubles mounted on the corn, soybean, and cattle farm he took over from his father, killed himself this summer at the age of 35.

Dykshorn is exactly the generation of farmer Armstrong asked Perdue about on the taxpayer-funded Sonnyside of the Street podcast: one who entered the business amid a “long, dark tunnel” of low prices. “What kind of words of encouragement do you offer?” Armstrong wondered.

“What we see happening is what farmers have done over the years—many of them have to have off-farm jobs in order to survive during this period of time,” Perdue advised. In other words: get a job. In early October, Perdue delivered a similar lecture to struggling dairy farmers at an industry expo: “In America, the big get bigger and the small go out…I don’t think in America we, for any small business, we have a guaranteed income or guaranteed profitability.”

Commodity farmers supported Trump overwhelmingly in 2016, and they’ve stuck with him, according to a recent poll. It remains to be seen whether the ongoing crisis, and Perdue’s public posturing, will change that.