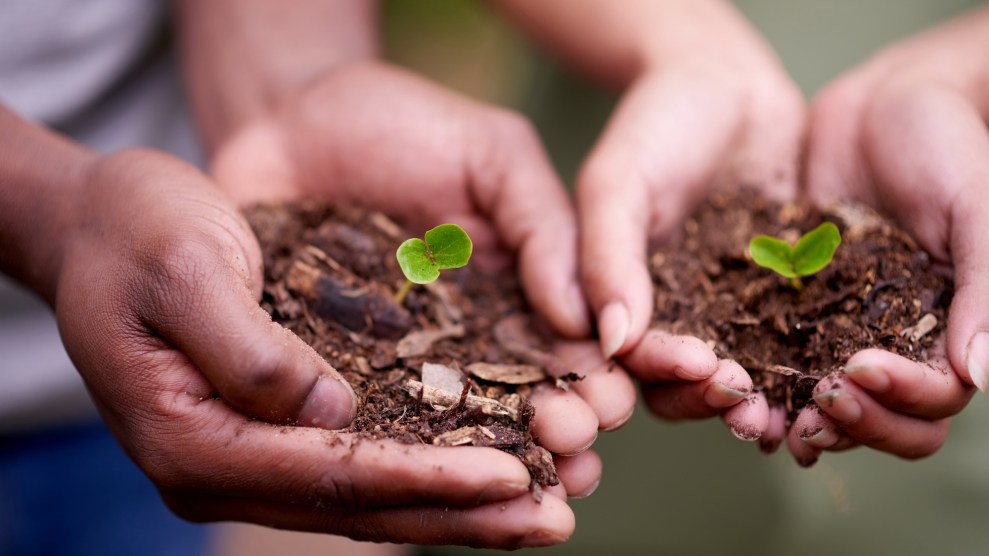 Nearly four years ago, Maddie Oatman, Kiera Butler, and I launched Bite, Mother Jones’ food podcast. Looking back over Bite’s first 99 episodes, I’m proud of the way we’ve stuck to our original vision: to explore “how your food intersects with other important topics like identity, social justice, health, corporate influence, and climate change,” as Maddie put it at the time.

For episode 100, we decided to dig into the dirt, for a look at the roots of where your food comes from: the farm. Specifically, the rising generation of farmers who will be tasked with keeping us fed while climate change brings increasingly furious storms and droughts, while also dealing with stratospheric land prices, enduring legacies of racism, and corporate domination of food markets that weighs down crop prices. It’s no wonder that the average age of US farmers has been rising for four decades, and now stands at nearly 58.

Despite these challenges, Maddie and I found reporting this episode, many young folks are champing at the bit to start farms or hold onto family land.

Nikiko Masumoto, who works on her family’s small organic stone fruit farm in the midst of California’s Central Valley, describes what it’s like to grow food in the middle if global hub of industrial agriculture. A yonsei (Japanese for fourth generation) farmer, Masumoto loves getting to “touch the same soil” on her parents and grandparents (who were locked behind by barbwire in an interment camp for Japanese Americans during World War II). But she’s also bracing for “another severe drought,” in the wake of the epochal one that gripped her region in early 2010s. The prospect is “daunting and scary,” she says, because climate models suggest even more-severe droughts are inevitable in the near future.

Leah Penniman, who runs Soul Fire Farm in upstate New York, explains why she combines food production with activism to “end racism and injustice in the food system.” For the young farmers of color who move through Soul Fire’s immersion program, she says, “access to land is the number-one barrier to being able to get started as a farmer, she says. The problem is deeply rooted in US history, from land grabs to slavery to Jim Crow. “By 1910, black farmers had accumulated almost 16 million acres of land,” she says. “And almost all of that has gone through a combination of outright racist violence, like burning people’s houses down and kicking them off their land, the role of the federal government and discriminating against black farmers, leading to foreclosures, and most recently, the way that people who don’t have a will are really subject to losing their land, particularly black farmers.”

“We have a waiting list many years long of aspiring black and brown farmers who want to come get connected to the land,” says Penniman.

Many young farmers are forced to launch their operations on rented land, but that is an extremely tough row to hoe, says Lindsey Shute, founder and former executive director of the National Young Farmers coalition, who farms in upstate New York with her husband, Ben. “We’ve known so many farmers throughout the years who have have only been able to rent land, and it is such a detriment to their business,” she says. “They don’t have an asset to capitalize their farm with, and build appropriate infrastructure to comply with food safety standards, to build fencing for their animals, to have wash-pack facility, and a loading dock and all these things that are that are basic, but really essential, if you’re looking to to farm full time.”

In the episode, you’ll hear several other voices—from a “landless farmer” in Oakland who grows food inspired by her farm-worker parents, to a “party farmer” in Williamsburg, Brooklyn whose “cash crop” is the events he hosts at his urban garden. You’ll also hear from a public-school teacher in the South Bronx who has turned his the schoolyard into a makeshift farm that yields both fresh food and learning opportunities for his students.

You’ll hear about a lots of challenges, including crops wiped out by freak storms, saddling young farmers with uninsured losses. But also strong currents of that special optimism of the will required of anyone who dares attempt to squeeze a living out of the dirt. “I honestly thought that I’d be all alone out there in the snowy hills at Soul Fire Farm, but we had been open not even a week, and folks were calling us saying, Can we come and learn how to farm?” says Penniman. “We have a waiting list many years long of aspiring black and brown farmers who want to come get connected to the land.”

As Michael Masefield, that Bronx teacher/farmer, tells his skeptical students at sowing time, “I mean, people have been planting seeds for thousands of years, and we still exist. So if you try it, it’ll probably work.”