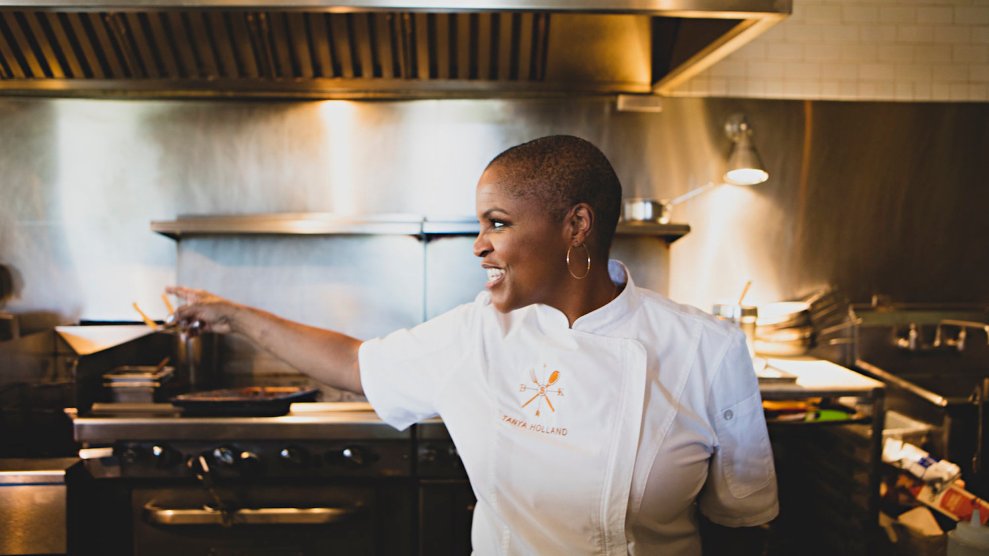 Fried chicken and waffles is a festive dish steeped in the history of the Great Migration, the 20th century fanning out of black people from the former slave-holding states the south into cities in the north and west. The combination delighted palates at nightspots like Wells Supper Club in Harlem during that neighborhood’s famous renaissance.

In the hands of renowned Bay Area chef Tonya Holland, owner of Brown Sugar Kitchen, it’s as subtle and delicious as anything you’ll find in a white-tablecloth culinary temple. Tender meat punctuated with a spicy crunch; crisp pastry that gives way to a soufflé-like interior; and it’s all wrapped up with soft butter and syrup to create one ambitious forkful. The dish embodies Holland’s aesthetic: impeccable technique and great ingredients applied to classic dishes of the African-American diaspora, served up in a convivial setting.

Brown Sugar Kitchen quickly earned status as the canteen for a city in cultural foment.

Holland moved to the Bay Area in the 2000s, intending to open a French bistro and ply the skills she had picked up at the La Varenne culinary school in Paris. But investors weren’t there for it, so she settled on a more casual concept: a kind of soul food diner. On Jan. 15, 2008—Martin Luther King’s birthday—she opened the original Brown Sugar Kitchen in a low-slung brown building on a gritty stretch of the Mandela Parkway in West Oakland, a legendary black neighborhood.

The spot quickly earned status as the canteen for a city in cultural foment. Holland described the clientele in her 2014 cookbook: “African-Americans, Asian Americans, and Latino Americans. Infants and the elderly, gay people and straight, celebrities and day laborers, bankers and emerging artists and musicians.” The novelist Michael Chabon, a neighborhood denizen and Brown Sugar Kitchen regular, called it Holland’s “little utopia on the Mandela Parkway.” More recently, Holland has moved Brown Sugar Kitchen to a bigger spot in uptown Oakland. She also became the first black chef to open a restaurant in San Francisco’s prestigious Ferry Plaza food hall. (This week, she announced that the Ferry Plaza branch would close on Jan. 19.)

At an event at the San Francisco Jazz Center last year, I interviewed Holland about the origins of her cooking chops and her path to establishing a foothold in an industry still dominated by white men. Listen up on the latest episode of Bite, and see highlights below.

What drew you into the restaurant business?

Tonya Holland: My parents are both from the south, and they had the southern-hospitality gene. They raised me in Rochester, New York. Hospitality was a way for them to connect with their new friends there, with the food that they grew up with. And the hospitality I grew up with always meant the the door was open, always a pot on the stove, there was always food for company, and they would deliver food to sick people and shut-ins through their church. At some point, they started this gourmet cooking club, which I took for granted as I was growing up; but later in my, in my early 30s, I realized how maverick they were to be part of this: three black couples and three white couples for 20 years, getting together over food.

It’s something I took with me as I went to college, and after college with jobs, and hosting my own dinner parties. And then I started working in restaurants, and aspired to be a restaurateur after I discovered the dining scene in Manhattan [in the 1980s]. I saw what Danny Meyer was doing, and chefs like Bobby Flay—I worked for him, and I thought, like, if this knucklehead can do it, I think I can do it. I think I got some skills, I can keep up.

As a black woman heading into a business dominated by white guys like Mayer and Flay, what obstacles did you hit?

What I first loved about the restaurant industry, when I discovered it in college, was how integrated it was. I had worked two or three summers at Eastman Kodak research labs. In the cafeteria, where people would self-segregate by race. And in in the community I grew up in, they’d do it based on income levels or education levels or race. In the restaurant business, it seemed like everybody could fit there. And I liked that. And I was meeting people who I thought were smart, and I was stimulated by. There were a few African-American restaurateurs in New York, so I just thought it was all possible.

“I was very competent, and it seemed like that threatened them.”

And then I went to France to formally get a cooking degree, and I thought for sure I’d be able to open the door into all these kitchens I wanted to work for. I wrote all the three- and four-star chefs. I would get some response, and show up—because my name sounds pretty Anglo—and they would just look at me like I had a couple heads on my shoulders. And then, you know, I wouldn’t get let into those kitchens. And then eventually some I would get into, but the opportunities were limited for my advancement. I was very competent, and it seemed like that threatened them.

The funny thing that’s happening now is I’m being pulled in all these conversations and more high-level participation, like the James Beard Foundation. I’m looking at my colleagues that are my age—like Tom Colicchio, like Danny Meyer—and they’re realizing , ‘We don’t have any black colleagues. They’re looking at me like, “Oh, that’s right, Tanya—we forgot to bring her along.” And I think, it’s nice that they’re finally seeing that,. But it was definitely, you know, challenging. There’s been a lot of low points and discouraging moments.

What’s it like running restaurants in the Bay Area, amid the rise of enormous tech companies that seem intent on hiring all the cooks to staff their fancy cafeterias and enticing their workers never to eat out?

That’s our biggest challenge right now in the Bay Area for restaurateurs: the workforce. The big tech companies are employing a lot of very capable cooks and chefs who have tons of experience, who are just exhausted by the lifestyle of independent restaurants, which is often without benefits, without vacation, no family leave, no opportunity to even have any kind of quality of life and work-life balance. And that’s what they get from the tech companies.

But in my opinion, the tech companies are doing our society a disservice on so many levels, because they’re creating these bedroom communities. They are taking away from the independent operators that are giving the flavor to community and culture. And, within the tech companies, they could say, like, “Oh, we have a diverse population.” Maybe, ethnically they do, but the workers still have the same social, educational, and economic level. And what I love that has happened in my restaurant is, everybody’s welcome. At Brown Sugar Kitchen, you’ll find a law enforcement officer sitting next to a Burning Man person, sitting next to you know, old ladies that just played mahjong in Chinatown, and you know, the church people. Everybody comes together. I’m just really in awe that that can happen. Happens. But again, that’s been my intention. And being in Oakland has lent itself to that as well.

You’ve been applying your classical French training to soul food for years. Now “elevated southern”—fancy restaurants essentially serving riffs on soul food—is all the rage, with white male chefs often at the helm. What’s that like for you?

You know, people will go and pay $20 for fried chicken at Ad Hoc [the casual spinoff of mega-chef Thomas Keller’s much-decorated Napa Valley restaurant Per Se], but they’ll sneer at paying $18 for my chicken and waffles. I’m sorry, but I know mine’s better, because I’ve had the Ad Hoc fried chicken. Thomas [Keller] can do a foie gras torchon much better than I can, but I want to say, “stay in your lane, Thomas.” I go to the restaurants because I’m like, I gotta go see for myself and taste for myself and see what this is about. And yeah, it’s disappointing.

When I first went to culinary school, I wasn’t thinking about cooking this cuisine. I wanted to do New Orleans French Creole, but with a a French base, like a brasserie or bistro. I wanted to do something that was attached to my heritage, because it’s authentic, but I also wanted to really elevate it. And then of course, when I was shopping around the concept, I couldn’t get a lease. No one leased me in any of the places I wanted to be in downtown Oakland. And so I ended up in West Oakland, and the concept I had was just too esoteric. So I developed Brown Sugar Kitchen, which I say is “a happy accident.”