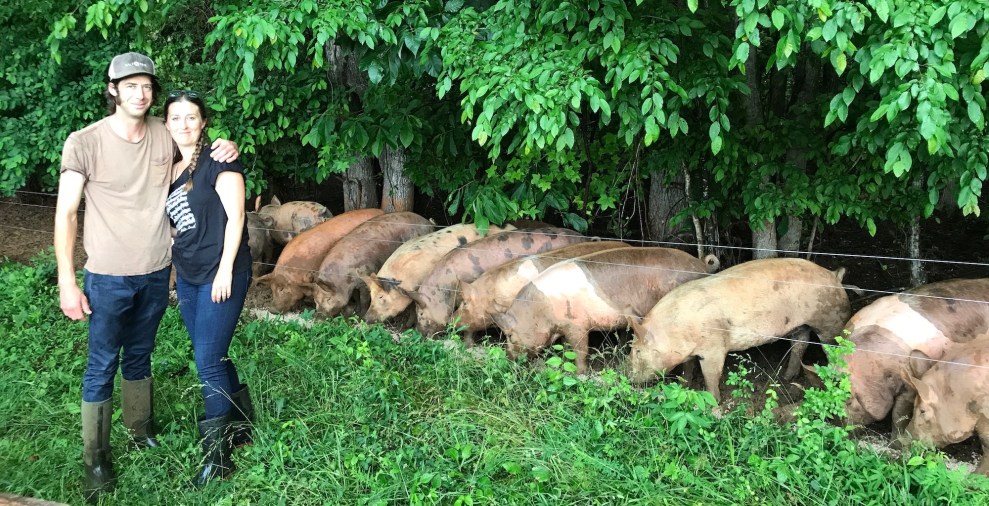 Hillary Wilson Kimmel and Worth Kimmel at PTB Farm in Reidsville, NC.

Hillary Wilson Kimmel runs PTB Farm with her husband, Worth, outside of Greensboro, North Carolina. They raise hogs, cattle, and sheep on pasture and grow vegetables, all of which they sell through two farmers markets. (Full disclosure: Kimmel is my sister-in-law and former partner on a different farm.) When the coronavirus lockdown hit, the Kimmels made a hasty switch to an online ordering platform with on-farm pickup. So far, despite some technology hiccups, the sales have been fairly close to normal, she said, and the one-time $1,200 stimulus checks she and her husband received helped them pay for the equipment they needed to transition away from the farmers market.

But she worries about what will happen during the summer and fall, the two seasons they rely on most for their annual income. What will the re-opened farmers markets look like? “Will it be safe for us to set up our stands? Will people come? Can we safely scale up our on-farm pickup?”

Small and medium farms like Kimmel’s—the kind that supply farmers markets, community-supported agriculture (CSA) boxes, and farm-to-table restaurants—have had a wild ride during the COVID-19 crisis. They’ve seen booming demand for their goods even as their normal sales channels close down, forcing them to improvise new ways to meet their customers. In a recent national poll of small-scale farmers commissioned by New York chef Dan Barber, nearly a third of respondents reported they’d face bankruptcy if farmers market and restaurant sales are still way down in August.

Nearly a third of respondents reported they’d face bankruptcy if farmers market and restaurant sales are still way down in August.

On May 19, President Donald Trump’s department of agriculture announced a $16 billion fund to deliver direct payments to farmers. The Coronavirus Food Assistance Program, as it’s known, is a product of the the CARES Act, passed in April to buffer the economy from the fallout of the coronavirus lockdown. The act dictated that the the funds should go to “agricultural producers impacted by coronavirus,” explicitly including “producers that supply local food systems, including farmers markets, restaurants, and schools.” At a May 19 presentation, USDA secretary Sonny Perdue said the program would deliver payments to “farmers of all sizes.”

But farmers and local-food advocates say the CFAP essentially shuts out small- and mid-sized farms that cater to local markets, which according to USDA research accounts for about $11.8 billion in annual sales. One fundamental problem is the program is designed to partially offset lost sales based on wholesale prices—which makes sense for large farms that move their produce at massive scale through distributors. But the wholesale commodity price is a “lot lower than what farmers get from selling at the farmers markets or to their farm to table restaurants,” said Ferd Hoefner of the National Sustainable Agriculture Coalition.

Let’s say you’re a farmer who grew a cache of asparagus intended for the farmers market, which closed down for the coronavirus, and you couldn’t find a new way to sell it. The going price at the farmers market is as much as $5 per pound; the Coronavirus Food Assistance Program offers per-pound compensation at the rate of $0.38. As a result of that discrepancy, Hoefner said, the program “just really doesn’t do much at all” for farmers geared to local markets.

Then there’s the fact that such farms tend to grow multiple crops. Not only would it be a paperwork headache to apply for loss coverage for a dozen separate crops; but many of the vegetables that are popular in local markets—kale, kohlrabi, Brussels sprouts, arugula—didn’t make the USDA’s list.

There’s also a seasonal issue. The Food Assistance program is designed to partially offset lost sales due to COVID-19 from mid-January 2020 to mid-April 2020. That’s a productive time for the mainly industrial-scale ag zones of southern California and central Florida, but for farms in vast swaths of the country, it’s low season. Farmers may be selling the last vestiges of winter crops, but their main focus is planting for the summer season. For these operations, the COVID-19 emergency forced them to retool their marketing channels on the fly, often by hastily rolling out online-ordering systems and contact-free pickups—while at the same time scrambling to keep up with planting schedules, and worrying about what the economic meltdown will do to summer demand.

Trump’s Food Assistance fund does nothing to ease these burdens, said Sanaz Arjomand, federal policy director of the National Young Farmers Coalition. The young and largely first-generation farmers her group advocates for are particularly vulnerable to the coronavirus crisis’ shocks, she added. They tend to farm on rented land with equipment they’re still paying for, running operations with low profit margins. The fund is “not a workable solution for early-career farmers hit with such a curveball that nobody could have seen coming,” she said.

In an April 9 letter to USDA chief Perdue, the Coalition proposed that diversified farms be given grants equal to 25 percent of their normal annual revenue, with payments capped at $25,000; and for farmers who are able to show clear documentation, coverage of 50 percent of losses, with a maximum payment of $100,000.

Such an income-based program would ease her anxiety and help prepare for the coming high season, Kimmel says.  An even simpler option, she adds, would be for the federal government to continue paying out monthly $1,200 stimulus checks—a program that would help millions of low- and middle-income people, including small-scale farmers and many of their customers, at a time of spiraling unemployment.

The fund “is absolutely designed for somebody,” Kimmel says, “but that somebody is not me.”

While the concerns of diversified growers went unheeded in the rollout of the Food Assistance fund, Big Ag clearly had the ear of the administration. At his presentation rolling out the program, Trump brought out Zippy Duvall, president of the American Farm Bureau Federation, a large insurance conglomerate and agribusiness lobbying outfit. Duvall heaped praise on Trump, calling him a “friend to the farmer” who “stood behind us during all the difficulties” of the pandemic.

The large operations whose interests the Farm Bureau promotes found plenty to like. The plan set maximum payouts at an eye-popping $250,000 per farm, and $750,000 for those that are set up as corporations running multiple entities. As a result, National Sustainable Agriculture Coalition’s Hoefner says, the $16 billion fund will likely flow mainly to growers of  already-highly subsidized crops like soybeans and corn, as will as large producers of hogs, cattle, and other livestock.

The fund “is absolutely designed for somebody,” Kimmel says, “but that somebody is not me.”