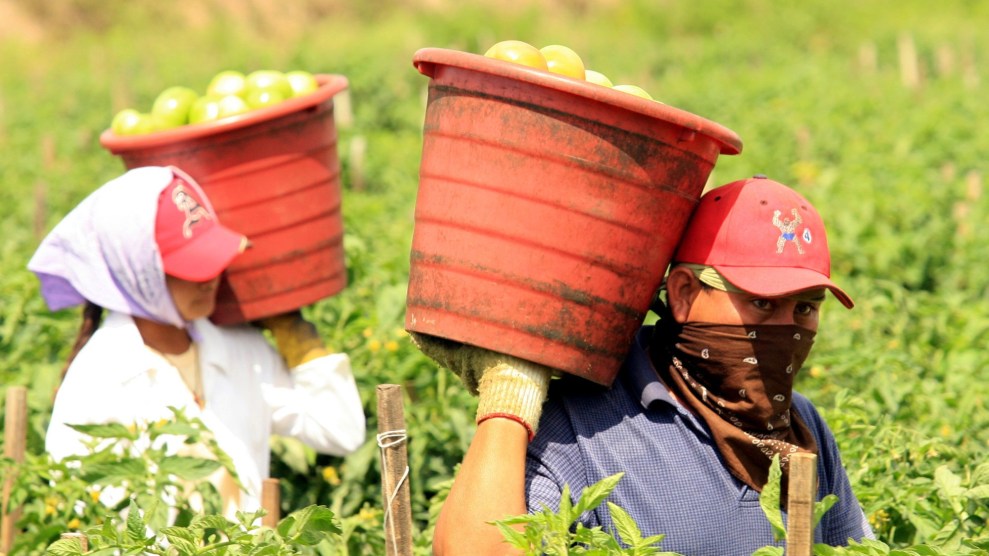 The coronavirus is a rapidly developing news story, so some of the content in this article might be out of date. Check out our most recent coverage of the coronavirus crisis, and subscribe to the Mother Jones Daily newsletter.
This story was originally published by the Food and Environment Reporting Network.

This story was produced by the Food & Environment Reporting Network, a non-profit news organization.

This past January, the Supreme Court upheld Donald Trump’s invocation of the Public Charge Rule, which denies green cards to immigrants likely to request federal health, nutrition, or housing assistance. At the time, advocates worried the rule would prevent both documented and undocumented immigrants, who make up about half of the agricultural workforce, from seeking health and other government aid. Now, that policy is bearing ugly fruit.

At a farm in Tennessee, all 197 migrant employees recently tested positive for COVID-19.

In the last several weeks, health workers in Immokalee, Florida, the nation’s tomato-growing capital, have detected an alarming surge in COVID-19 cases: an average of 24 new positives a day. In April, the town of roughly 30,000—most of whom work in agriculture and many of whom are undocumented—saw a total of 42 positive cases. Since then, that number leaped twelve-fold, with more than 500 new cases added to the roster. In the county, there have been 49 COVID-related deaths and 213 hospitalizations.

These upticks mark a new front in COVID-19’s march through the food system, beyond the meatpacking plants that have been ravaged by the disease. But why was the leap in positive cases so sudden in Immokalee? Because, advocates say, the virus testing got off to a slow start in this poverty-stricken town, as it has in other agricultural areas.

In early May, the state called in the National Guard to Immokalee to conduct limited testing; more testing and robust educational outreach, in multiple languages, by Doctors Without Borders followed. The nonprofit had come to town at the invitation of the Coalition of Immokalee Workers (CIW), a human-rights organization. Finally, with positive cases surging, the Collier County Health Department announced on May 29 it would partner with the Healthcare Network of Southwest Florida and Doctors Without Borders to offer, at locations around Immokalee, free ongoing testing, three days a week, with evening hours to accommodate farmworkers.

This flurry of testing “has shown the real vulnerabilities of this community,” said Oscar Otzoy, a farmworker turned organizer for the CIW, through a Spanish translator.  “We are unprotected from this virus because it’s not easy to do social distancing.” Most workers rent mobile homes, with up to four people crammed into a single room, and ride to farm fields in buses crowded with 40 to 60 people.

The same conditions are common in other ag-intensive regions, many that have seen their own COVID-19 outbreaks. Positive cases in Monterey County, California, jumped from a total of 73 in March, to 187 in April, and 310 in May, according to county health statistics. More than a third of those diagnosed are farmworkers, many of whom share homes or apartments with two or three families. At a farm in Tennessee, all 197 migrant employees recently tested positive for COVID-19, though only three displayed symptoms. Yakima County, Washington, has seen a surge of COVID-19 among agricultural workers, with nearly 500 cases. Fruit packinghouse workers in the county walked off the job last month, protesting lack of protective equipment; the state will require stronger protections for its agricultural workers that take effect June 3.

“If you need to stay home for two weeks [to quarantine], you’re not going to get paid, which puts you at risk of losing your housing.”

“These are essential workers who must continue to go to work,” Otzoy said. “The majority of people who are infected live paycheck to paycheck. If you need to stay home for two weeks [to quarantine], you’re not going to get paid, which puts you at risk of losing your housing. And that is an impossible position to be in, especially if you have a family.”

The CIW continues to advocate for public health officials to ensure access to so-called wrap-around services, which help infected people comply with public health orders to self-isolate and prevent the spread of the virus. Infected people also need help paying rent, Otzoy said, so they won’t be evicted if they stay home from work.

County Commissioner William McDaniel, Jr. said these services already exist—the town has access to 30 empty homes south of Immokalee and a dormitory with more than 100 empty beds for residents who qualify for and need assistance. Money from the CARES Act can pay for COVID-19 patients’ care, including rent, food, and medicine. “But there are a lot of barriers for Immokalee residents,” McDaniel said, explaining why few have taken advantage of the program. “People are fearful to admit they are symptomatic for fear of deportation. There are language, income, cultural, and legal barriers to seeking help, and that allows the increase in positive tests.”

The US Citizenship and Immigration Services, part of the Department of Homeland Security, has encouraged anyone with COVID-19 symptoms, “including aliens,” to seek testing, medical treatment or preventive services. The agency has stated that doing so won’t “negatively affect any alien as part of a future Public Charge analysis.” Of course, many in Immokalee might not have heard of this exemption, or, after years of anti-immigration rhetoric from the Trump administration, may distrust it. Contacted on the phone by disease tracers, people in Immokalee invariably state they are asymptomatic and don’t need any help, McDaniels said, noting that county officials and community groups are trying to spread the word: “No one will be deported or denied care based on their immigration status.”

Early in the harvest season, Immokalee growers built handwashing stations in their fields and distributed and required masks at work and in transit. According to the Florida Fruit and Vegetable Association, employers also increased worker training; increased distance between employees in, and cleaning of, warehouses and packinghouses; took farmworkers’ temperature; and allowed fewer workers on buses. And yet the virus continued to spread.

“We need to look at the bigger picture,” Otzoy said. “We need to pursue systemic change”—in the form of higher wages, industry-wide, so farmworkers across the nation can live and travel in less crowded conditions.

Fifteen years ago, the CIW pioneered the Fair Food Program, which requires participating tomato buyers—which now include Walmart, Whole Foods, Trader Joe’s, McDonald’s and Taco Bell, among other retailers—to pay a premium that’s funneled directly to farmworkers, who toil at piece rate, in the form of a bonus. The program protects workers’ rights, ensures no worker earns less than the minimum wage, and that laws against wage theft are enforced. But to further increase wages, the campaign must bring in more responsible buyers: CIW for years has been pressuring Wendy’s—with a national boycott, protests, and vigils—to join the Fair Food Program.

Workers who began the season harvesting tomatoes in Immokalee are now traveling north to pick tomatoes and a smattering of other crops—squash, eggplant, bell peppers—in central Florida. From there, they will migrate to farms in Georgia, the Carolinas, Maryland, Virginia, New Jersey, and other states, where they will mingle with local field crews. The potential for transporting the virus anew to those areas is real, but Otzoy believes growers and health authorities along the eastern seaboard still have time “to get ahead of this outbreak and make a difference” if they act quickly.

Agricultural communities, following Immokalee’s lead, can offer more testing to both symptomatic and asymptomatic workers. They can provide more contact tracing to identify those who might have been exposed, and clearer communication—perhaps via trusted community partners—about the wrap-around services on offer and the exemption from federal public-charge rules.

Along the eastern seaboard, crews are now preparing and cultivating their fields. Immokalee workers hope they are preparing, as well, to take care of their incoming laborers. “The CIW has done a lot of work to educate workers and employers about the things they need to be doing,” Otzoy said. “They need to understand not only that these are essential workers but also human beings who need to be protected.”

This story was updated to add action by Washington State and additional detail on the Fair Food Program.