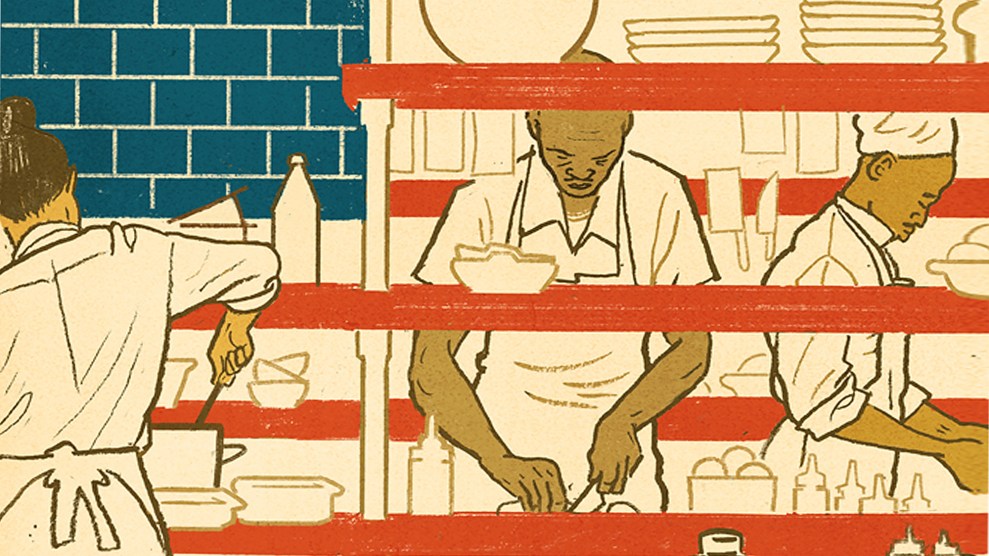 Back in March, as coronavirus cases were just beginning to surge and cities were locking down, chef and globe-trotting disaster-relief activist José Andrés called for a federal mobilization to combat the coming “economic catastrophe” and the twin scourges of rampant unemployment and hunger. Andrés, who had moved to the United States from Spain in 1991, looked to the Great Depression for inspiration. He pointed to a past effort to create jobs amid an economic meltdown: the Works Progress Administration, a cornerstone of President Franklin D. Roosevelt’s New Deal. “Today we need a WPA to feed America,” Andrés wrote in a New York Times op-ed.

In the months after his prophetic appeal, the jobs market cratered and government income support fell drastically with the expiration of the CARES Act. The crisis cut through Andrés’ industry like a cleaver. Even after a rebound due to fitful reopenings, the food and beverage industry had shed nearly a fifth of its pre-pandemic workforce, or 2.1 million jobs, by midsummer. In San Francisco, according to credit card data, restaurant sales in July were 84 percent lower than the same month a year before. Restaurant owners are dreading the winter, when the end of outdoor dining will make indoor social-distancing restrictions even more onerous.

Around 20 percent of Black and Latino households lacked access to consistent meals—nearly triple the rate of white families.

Meanwhile, enrollment in the main federal food-aid program, the Supplemental Nutrition Assistance Program (SNAP), had jumped nearly 17 percent by April, and long lines strained food banks. By early October, around 22.7 million adults and as many as 11 million children didn’t have enough to eat, according to the Census Bureau. Around 20 percent of Black and Latino households lacked access to consistent meals—nearly double the rate of white families.

A WPA-type program that targets hunger relief would be a “solution that tackles many issues in a holistic way, 360 degrees,” Andrés told me. In his plan, the federal government would pump money into restaurants and underused institutional kitchens, like schools and churches, which would then hire workers to cook for people in need. Food-service businesses, especially small ones, would be able to make rent, pay employees, and pay suppliers, including farmers, and in the process feed people in crisis.

Bolstering the National School Lunch Program is central to Andrés’ vision. In the 2019 book The Labor of Lunch, Jennifer Gaddis, a professor of civil society and community studies at the University of Wisconsin, Madison, traces the modern-day school lunch program to WPA-era efforts to feed hungry kids and boost family incomes by hiring women to cook school lunches. By 1941, Gaddis writes, the WPA employed more than 64,000 workers who churned out 6 million school lunches a day, feeding one in four schoolkids.

But even though schools are a vital part of the anti-hunger infrastructure, their resources have been sapped: Federal investment in school kitchens largely stopped in the early 1980s, and the cracks are showing. Surveys show that a large majority of school-food administrators reported that they lacked at least one piece of equipment needed to serve healthy lunches.

In recent years, the onus has been on individual districts to pay cafeteria workers, supplemented with a maximum of $3.53 per lunch, which has to cover ingredients, overhead, and labor. As a result, Gaddis says, schools are cutting corners in the cafeteria. Andrés adds:  “We could put a lot of Americans to work building kitchens in the schools, raising the quality level [of meals], hiring people that we trained to be feeding their children.”

“There is work to do; there are [people] to do it. Why not bring them together?”

The Trump administration, of course, has no appetite for a big anti-­hunger jobs program, but a Democratic administration might. Joe Biden has expressed enthusiasm for Andrés’ proposal, and Kamala Harris co-sponsored a bill that would fund restaurants to provide food to needy people in emergencies, a kind of miniature version of the chef’s idea.

In 1929, at the dawn of a massive global depression, the British economist John Maynard Keynes laid out the basic premise that would ultimately animate the New Deal: “There is work to do; there are [people] to do it. Why not bring them together?” As the pandemic grinds on, feeding the swelling ranks of hungry Americans may be the most important work of all.