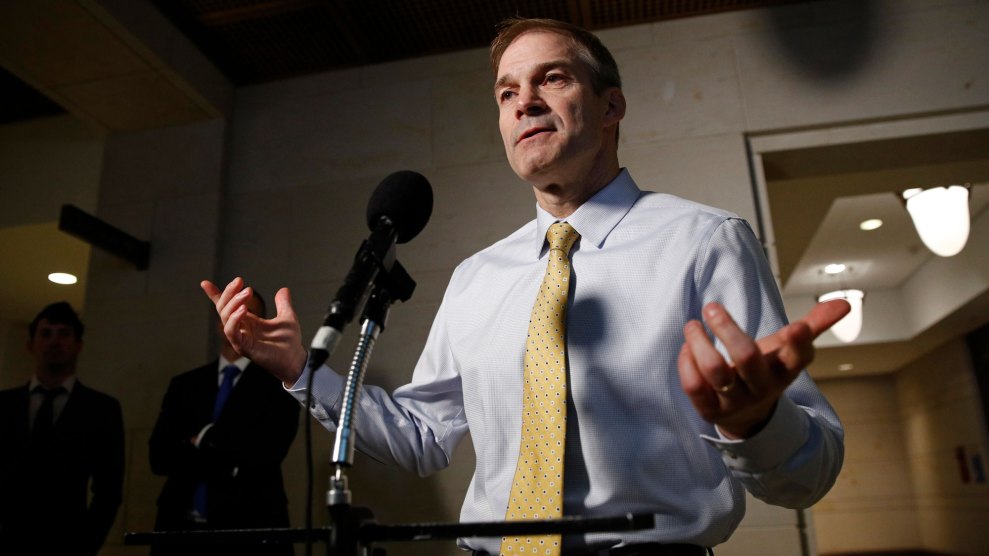 On Friday, we caught a glimpse of Jordan’s line of questioning in the impeachment inquiry when former top White House National Security Council Russia adviser Fiona Hill’s deposition was released. But a day earlier, allegations that Jordan turned a blind eye to reports of abuse during his tenure as an Ohio State University wrestling coach came back to haunt him.

Rep. Jim Jordan posits that it all worked out, Ukraine got security assistance and Trump & Zelensky hit it off in NYC.

Jordan’s so-called pursuit of fairness in the impeachment inquiry is complicated by claims from former wrestlers that Jordan knew of and ignored complaints that the team doctor was sexually abusive for decades. The latest accusation arose from a referee who said he told Jordan and then-head coach Russ Hellickson in 1994 that OSU team doctor Richard Strauss masturbated in front of him in a shower after a wrestling match. It was documented in a lawsuit filed on Thursday by 43 former sexual abuse survivors against Ohio State—the suit is the 13th of its kind.

“Yeah, that’s Strauss,” Jordan and Hellickson allegedly said at the time, shrugging off the incident.

John Doe 42 said that when he informed Jordan and Hellickson about what happened, their response was, “Yeah, yeah, we know.”

The scope of Strauss’ abuse was an “open secret” at Ohio State: An independent investigation found that at least 177 former OSU athletes were sexually abused by Strauss over the course of two decades. The report revealed that Ohio State employees knew about the abuse allegations at the time but the investigation couldn’t make “conclusive determinations” about whether specific coaches knew of complaints against Strauss, who killed himself in 2005.

Ohio State officials also revealed in October that they were aware of 1,429 instances of fondling and 47 rape allegations against the abusive doctor. Eight former wrestlers have claimed that Jordan knew of the allegations but failed to intervene. That includes Dunyasha Yetts, who wrestled at Ohio State in 1993 and 1994, who claims that he told Jordan directly about a personal incident in which Strauss tried to take off Yetts’ shorts. Yetts also told NBC News that he and other teammates told Jordan about Strauss’ behavior.

Jordan, the top Republican on the House Oversight Committee, has repeatedly criticized Democrats for trying to impeach the president before the election and described the impeachment inquiry as an “unfair and partisan process.” He has refuted claims that he knew of and ignored Strauss’ abuse when he was at Ohio State University.

“Congressman Jordan never saw or heard of any kind of sexual abuse, and if he had he would’ve dealt with it,” a spokesperson told the Washington Post on Friday.

As the lawsuits by former athletes mount, it’s clear that the matter of who knew what during Jordan’s tenure at OSU isn’t going away.