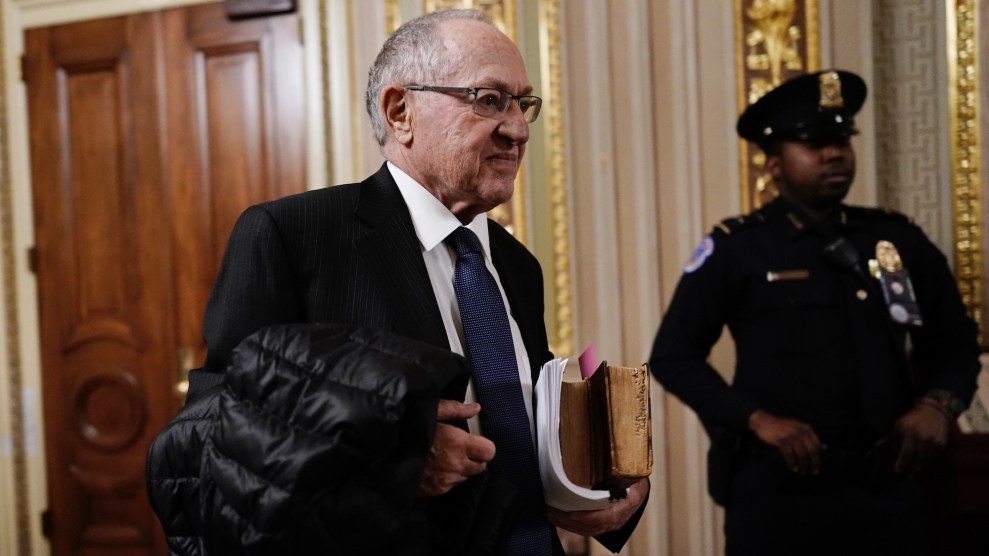 During a heated question-and-answer session on Wednesday, Alan Dershowitz, a member of the president’s legal team in the impeachment trial, continued to argue that even if Trump’s decision to withhold military aid from Ukraine last summer qualified as an “abuse of power,” as such, it does not qualify as an impeachable offense. Instead, he said, “abuse of power” falls under the category of “maladministration”—a term rejected by the framers of the Constitution in the 18th century.

As evidence, he cited…the dictionary. “What is maladministration?” Dershowitz asked, pressing his fingertips together as he stood before the Senate chamber. “If you look it up in the dictionary and you look up synonyms, the synonyms include abuse, corruption, misrule, dishonesty, misuse of office, and misbehavior.”

The Internet promptly did some fact-checking:

Dershowitz said if we open any dictionary, we'll find out that maladministration is synonymous with abuse of power.

So I checked a few dictionaries.

It wasn't in my Black's Legal, so I checked online Oxford, Macmillan, Cambridge, etc.

I leaned that it means incompetence. pic.twitter.com/7YCAm8iB14

Weird, it doesn't seem that "maladministration" is remotely a synonym for "abuse of power." pic.twitter.com/fKlKS9cpwc

Merriam-Webster defines maladministration as “corrupt or incompetent administration (as of a public office).” Macmillan has “bad or dishonest management.” According to Dictionary.com, the term means “to administer or manage badly or inefficiently.”

So, not synonymous with “abuse of power.” And of course, definitions can evolve over some 200-odd years. But even at the Constitutional Convention, it was clear that nobody could agree on the meaning of “maladministration”—and in fact, that was the very reason it was rejected as a standard for impeaching a president. Politico has the 18th-century backstory:

In the waning days of the convention, on September 8, 1787, Virginia delegate George Mason moved to add “maladministration” to the existing list of impeachable offenses—at that point, only “Treason or Bribery.” Madison objected that “so vague a term [as maladministration] will be equivalent to a tenure during pleasure of the Senate.” Mason responded by withdrawing his motion and substituting “other high crimes and misdemeanors against the state.” Mason’s revised motion passed 8-3, which is how the “high crimes and misdemeanors” language got into to the Constitution.

The puzzling rhetorical cartwheels by Dershowitz and the rest of the president’s legal team all serve the larger strategy of convincing the Senate that in order to remove the president from office, the House managers must prove that Trump had committed a criminal offense. Ironically, Dershowitz has also had to do some additional gymnastics to explain why, 22 years ago, he believed a crime was not necessary for an impeachment trial.

“What happened since 1998 is that I studied more, did more research, read more documents and like any academic altered my views. That’s what happens,” he said. “That’s what professors ought to do.”