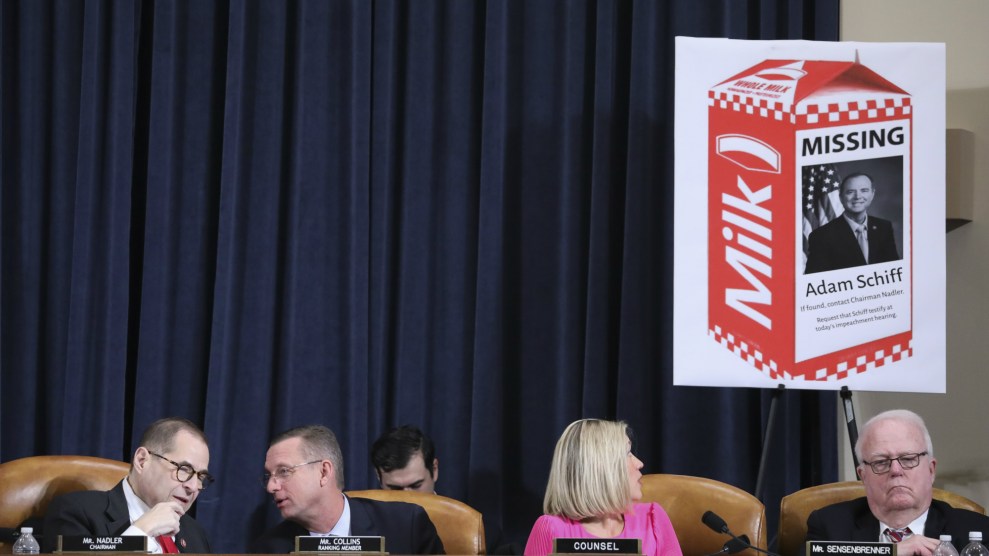 A Republican prop during a House Judiciary Committee hearingJonathan Ernst/AP

The impeachment trial of President Donald Trump is a test of our nation’s institutions and traditions. And that has meant, for many of us, learning about them.

During the trial, a new set of rules are imposed. Senators become jurors. Aides are restricted to sitting in the back of the chambers—if they get in at all. Cellphones must be left outside in a special cubby made by Capitol Hill carpenters specifically for this event.

The leader of all these logistics is the Senate’s sergeant-at-arms and doorkeeper. (Yes, that’s the full title.) Originally, it was just doorkeeper—a position created in 1789 because of the “single-most-pressing problem confronting the Senate at its birth,” according to the Senate’s website: “its inability to keep a majority of members in the Capitol long enough to organize and begin the business of government.” Over time, the role became multifaceted. James Ziglar, sergeant-at-arms during the impeachment trial of President Bill Clinton, sums it up as a combination of chief operating officer, chief enforcement officer, and chief protocol officer. “You know, following the protocol rules when a king or somebody comes to the Capital, [making sure] they’re treated the way they’re supposed to be—blah, blah, blah,” he explained. It’s “unusual” for all the roles to come into play at once, he says, “but all of [them] do show up when you’re having an impeachment trial.”

As the long days of argumentation and deliberation continue—senators have been stuck in chambers late every night of the hearings so far—some are starting to test the anachronistic rules. At least four have brought milk in with them (aside from water, milk is the only drink allowed). Another weird rule: There is no food allowed on the floor—except for the candy stocked in a special desk occupied, since 2015, by Sen. Patrick Toomey and by Sen. Rick Santorum during the impeachment of Bill Clinton. (I think it’s healthy and good to imagine our leaders deciding things on a steady diet of lactose and high-fructose corn syrup.)

To understand why such rules are important and all the other quirks that come with this particular event, we asked Ziglar, now a senior counsel at Van Ness Feldman, an environmental law firm, about studying Andrew Johnson’s trial, former Chief Justice William Rehnquist’s love of desserts, and the importance of arcana.

How did you prepare for impeachment? It was only the second one at that point, the first modern one.

When I took the sergeant-at-arms job in November 1998, it was only a month and a few days before they actually impeached President Clinton. It was pretty clear to me right away when I got there that I needed to be boning up on impeachment and how it occurs in the Senate.

The way I went about it was: One, just spending all kinds of time studying the Andrew Johnson trial. I read Bill Rehnquist’s book. I spent a lot of time with the Senate historian and parliamentarian. They were all scrambling, too, to understand, to go back and review all the records from that trial.

I then assembled a committee of people. It was about half Democrats and Republicans. We worked together to survey all the things we could come up with that might happen in a trial. We figured it out.

Why did you choose to keep certain traditions? For example, I read that the current Senate sergeant-at-arms reportedly has to announce at the start of each session that everyone must be quiet “on pain of imprisonment.” Did you have to do that?

That originated in the Andrew Johnson trial. Remember, the senators—when they are sworn in and they go into so-called “impeachment trial mode”—they are sitting there as triers of the impeachment articles. They are in many ways jurors. They are required to remain silent and pay attention.

Were there other things you updated? Or kept from Johnson?

How about the modern problems: iPads and laptops and cellphones? A carpenter made a cabinet with cubbyholes for folks to place their electronics for this impeachment. Was there an equivalent during your time?

We didn’t have cellphones and iPads and stuff like that. I mean, there were cellphones around, of course, but they weren’t ubiquitous.

We did have to have tables that fit in the well of the Senate. In fact, if you watch what’s going on—right as we speak—those tables that the House managers are sitting at and the president’s council is sitting at, they’re the tables that were actually made for the Clinton trial. We put them into government storage, never thinking they’d have to use them again. But here we are.

Another example that I think I saw on the floor: They have a little step, a stool-like thing. We had some senators who were quite short, like [former] Sen. Barbara Boxer [from California] and Sen. [Barbara] Mikulski from Maryland. We had to give them something so they could stand up a little higher to see over the lectern.

And in our particular case, Chuck Ruff, the president’s council, was in a wheelchair. So we had to create a table for him to be able to make his presentations.

For the trial you organized, was there—as today—haggling over how many cameras should be in the chamber?

That wasn’t a big discussion. I believe C-SPAN and some others wanted more TV cameras in the chamber. We almost let them do it. But Sen. [Robert] Byrd objected to it at the last minute. So we used the existing technology for that.

We’ve been wondering about how aides work in all of this too. They’re locked out basically. It’s different from normal, right?

Very different. Non-senators aren’t allowed to be on the floor or to be standing in the back, period. They could sit in the seats that were provided around the edge of the chamber. In fact, the only person that was really allowed to stand at the back was me.

Yes, because my job was to make sure everything was going okay. While I sat in my chair most of the time, I did from time to time go back and I’d stand on the Democratic side for a while, stand on the Republican side for an equal amount of time—so that I wasn’t showing favoritism.

But a lot of people didn’t like [the fact that aides weren’t allowed]. You have to sit down. You can’t talk. You can’t jump up and give your senator a message or anything like that.

I’m going to change gears a bit. I want to know what it was like during the trial. I read that Chief Justice Rehnquist was grumpy and so you got him dessert during the breaks. Is that true?

Yes. Well, I knew Rehnquist well. He and I worked together at the Justice Department. I was on his Senate confirmation team, and I was a law clerk myself at the Supreme Court when Rehnquist was a justice. So, we had a long history together.

Well, he was grumpy not about having to be presiding. He was grumpy about the constant breaks they were taking and how much time was wasted. His time was being wasted waiting for the Senate to come back.

So he was a little grumpy about it. He had a lot of other things to do.

I had lunch with him one day. I said, “Okay, chief, you’ve been real grumpy lately,” and “What can I do to make you happier?”

He got a little smile. He said, “Yeah, I guess I have.” And he said, “Well, I like cookies-and-cream ice cream and chocolate chip cookies. And we’ve got these long breaks. If you could arrange to have ice cream and a chocolate chip, that’d make me a lot happier.”

From then on, when we had a long break, I always made sure my staff went down to the Senate dining kitchen—we kept ice cream and cookies down there—and bring it up.

Guess what? He was a much happier guy.

The other thing I read was that you busted him gambling with nickels and dimes.

I walked in and he was playing cards with two of his clerks and his executive assistant. And there were nickels and dimes on the table. I think they were playing poker. I said to him, “Chief, I don’t know if you know this, but I’m chief law enforcement officer in the Senate also, and gambling’s not allowed. And I’m sure you’re not gambling in here, but I got to run out for a second for a quick meeting.”

So I just walked outside the door, closed it, and waited for about five minutes, and then walked back in. Of course, all the money was gone, but there were little pieces of paper, with one, five, and 10 written on them. They were spread all around the table.

There’s a tendency to assume traditions like the Senate’s are all ridiculous or arcane. But can they be a good thing in time of impeachment?

What I learned in the Senate—and I worked in the Senate back in the ’60s and ’70s—is that precedents are important. The Senate is a place where people tend to be institutionalists. They tend to follow procedures. And ceremonial things from the outside can look kind of silly, but they’re not actually. Things we did in Clinton’s impeachment tried to emphasize to these folks—the senators—the historical importance of what they were doing, and it made them think back to the founders and framers, and what they were thinking about.

These arcane things, as we call them, and some of this pomp and circumstance, I think they’re very important, frankly.