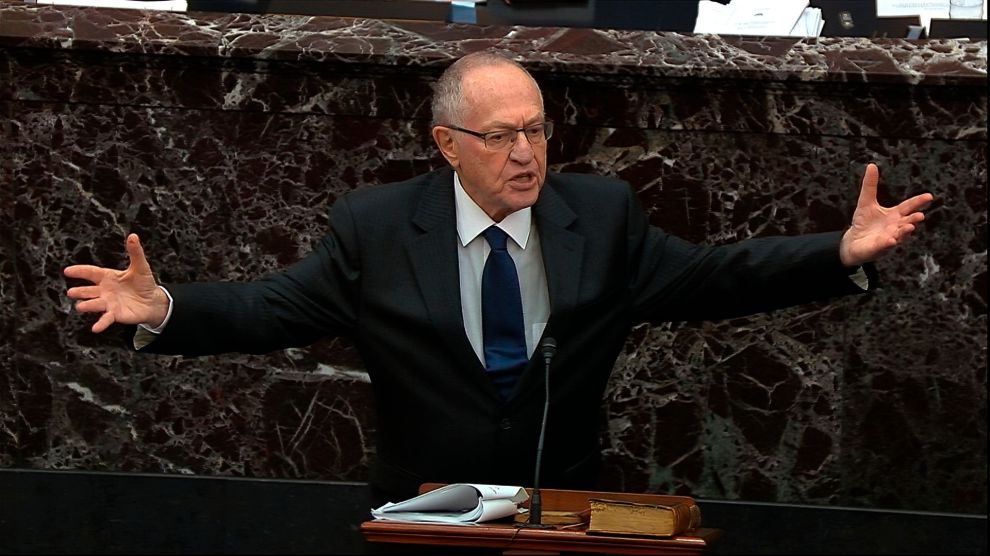 President Donald Trump’s lawyers spent most of Monday avoiding the topic of John Bolton’s leaked manuscript, which reportedly alleges Trump’s direct involvement in improperly holding up aid to Ukraine to pressure that country’s leaders into digging up dirt on Joe Biden. Alan Dershowitz, the celebrity lawyer who recently joined the president’s defense team, changed that this evening with one definitive statement on the floor of the Senate.

“Nothing in the Bolton revelations, even if true, would rise to the level of an abuse of power or an impeachable offense,” Dershowitz said.

The Bolton revelations strike at the heart of Trump’s impeachment defense. For months, Trump’s allies have maintained that his focus on corruption in Ukraine was genuine. Bolton’s book apparently undercuts that premise. In a conversation described in the manuscript, Trump told Bolton that “he wanted to continue freezing $391 million in security assistance to Ukraine until officials there helped with investigations into Democrats including the Bidens,” the New York Times reported.

Trump dismissed Bolton’s account as “false” on Monday, but Dershowitz insisted hours later that Trump should be in the clear even if the version of events in the manuscript is accurate. That’s because Dershowitz believes “abuse of power” and “obstruction of Congress,” the two articles of impeachment approved by House Democrats against Trrump, do not rise to the level of impeachable conduct under the Constitution because only criminal offenses merit removal form office. Most historians and legal experts disagree with Dershowitz’s view. Even Jonathan Turley, the law professor called by House Republicans as their witness before the House Judiciary Committee, said he “seriously” disagreed with Dershowitz’s view.

My friend Alan Dershowitz is doing an outstanding job in presentation, but I must again seriously disagree with his portrayal of both the Johnson trial and specifically the argument of Justice Curtis. https://t.co/FKPmZt7bQ9

The remark did not even cohere with Dershowitz’s previous statements about presidential impeachments. In 1998, Dershowitz said, “If you have somebody who completely corrupts the office of president and who abuses trust and who poses great danger to our liberty, you don’t need a technical crime.”

That apparent contradiction did not seem to unsettle Dershowitz, who wrapped up his remarks by noting that his views on impeachment may not be widely shared.

“I do my own thinking,” he said. “I have never bowed to the majority.”