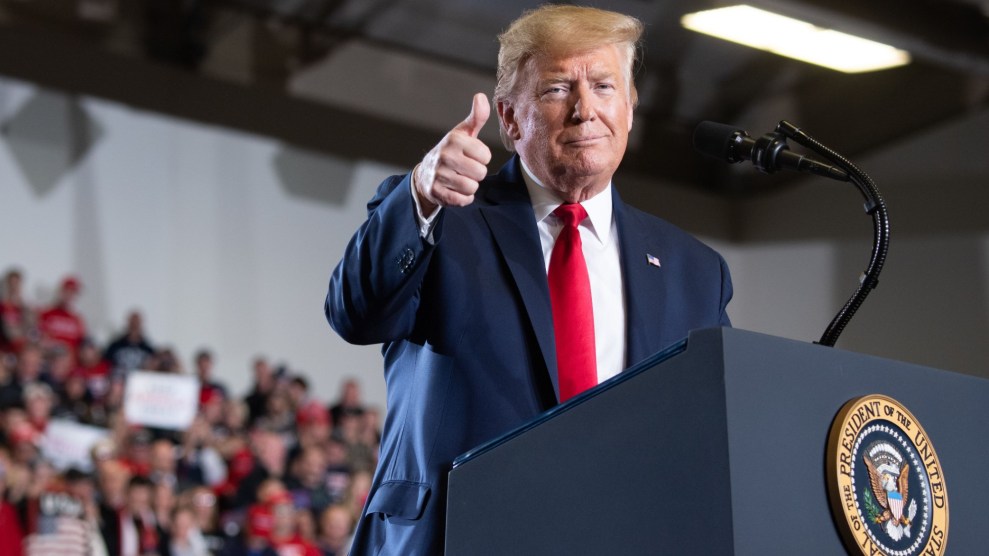 The Senate on Wednesday voted to acquit Donald Trump in the impeachment trial stemming from the Ukraine scandal. On the first article of impeachment—which alleged that the president had abused his power—Republican Mitt Romney joined all 45 Democrats and two independents in voting to convict Trump, but that was far short of the two-thirds majority needed to remove the president from office. On the second article of impeachment, which alleged obstruction of Congress, all 53 Republicans voted to acquit the president; every Democrat and both independents voted to convict.

House Democrats—joined by one Republican-turned-independent—had accused Trump of improperly pressuring Ukraine to launch an investigation into Joe Biden and his son Hunter. A congressional inquiry into Trump’s conduct ensued, sparked by an anonymous whistleblower complaint regarding a mysterious hold on military aid to Ukraine. Over the course of several high-profile House hearings, career government officials gave dramatic testimony about Trump’s efforts to coerce the Ukrainians into launching investigations designed to help the US president politically.

On December 18, the House passed two articles of impeachment against Trump, leading to a trial in the Senate. Majority Leader Mitch McConnell (R-Ky.) said at the outset that he wanted a speedy trial and speedy acquittal; he ultimately got both. Republicans successfully quashed a push from Democrats to subpoena several key witnesses, including former national security adviser John Bolton and White House chief of staff Mick Mulvaney—both of whom appeared to allege at various points that Trump had tied the Ukrainian military aid to his desired investigations.

Bolton’s testimony was the one Democrats craved most. A manuscript he wrote about his time in the Trump administration reportedly included several passages undermining the narrative on which Trump and his allies had based the president’s defense strategy. His eyewitness account could have been a smoking gun. Instead, the GOP Senate majority largely stuck by Trump—first by blocking witness testimony, and then by ensuring that he would not become the first American president to be removed from office.

On the latter issue, Romney proved to be the one exception. In a dramatic floor speech before Wednesday’s vote, he described his vote as “the most difficult decision I have ever faced.”

“I am aware that there are people in my party and in my state who will strenuously disapprove of my decision, and in some quarters, I will be vehemently denounced,” he said. “Does anyone seriously believe I would consent to these consequences other than from an inescapable conviction that my oath before God demanded it of me?”

Romney’s speech won praise from Senate Democrats—Chris Murphy (D-Conn.) called it “one of the most important speeches I have ever had the good fortune to hear in person”—but Republicans quickly turned on Romney, who just eight years ago was the party’s nominee for president.

“Mitt Romney is forever bitter that he will never be POTUS,” Donald Trump, Jr. tweeted after the vote. “He was too weak to beat the Democrats then so he’s joining them now. He’s now officially a member of the resistance & should be expelled from the GOP.”

Romney’s niece, Republican National Committee Chair Ronna McDaniel, said in a statement that this was “not the first time I have disagreed with Mitt, and I imagine it will not be the last.”

Echoing the view of the official party apparatus, she added, “The bottom line is President Trump did nothing wrong, and the Republican Party is more united than ever behind him.”

Not all Republicans necessarily agreed with that assessment. Two possible swing votes, Sens. Lisa Murkowski (R-Alaska) and Susan Collins (R-Maine), voted against removing Trump, but agreed with Romney that the president’s conduct was improper. “The president’s behavior was shameful and wrong,” Murkowski said Monday. “His personal interests do not take precedence over those of this great nation.” Collins, while acknowledging that Trump’s behavior toward Ukraine was “flawed,” said she did not believe the House managers’ case justified “the extreme step of immediate removal from office.”