[W]hat would an economist expect to happen in a situation in which option one carries no risks and reasonable expected rewards and option two carries enormous risks and only moderately higher expected rewards? In short, the incentives in the economics profession, just as in finance, strongly encourage a lack of original thinking.

Actually, I think this is too simplistic. There are some exceptions, of course, but even the economists who saw the housing bubble for what it was mostly didn’t predict that its bursting was going to cause a massive global credit crunch and the biggest slowdown since the Great Depression. In fact, to a large extent, we still don’t quite know why the reaction to the housing bust has been so severe. So there’s a genuine question here that’s worth diving into in more detail.

Still, I think Baker is basically right, and it’s worth keeping in mind how the incentives work in the finance industry. Suppose, for example, that everyone on Wall Street knows there’s an investment strategy that will pay off big 19 years out of 20, but implode in that one remaining year. What’s the right thing to do?

Obviously, the answer is: follow the flawed strategy. If you don’t, and everyone else does, then within a couple of years you’ll either get with the program or you’ll be out of a job. Even in the absence of any kind of fraud or collusion or mass insanity, following a strategy that you know will be disastrous 5% of the time is simply too profitable to pass up.

Given that, what should be the role of the government in trying to prevent systemic meltdown? Regulations that target fraud are useful, but remember: even if everyone is purer than Caesar’s wife, they’ll still be forced to follow the flawed strategy. 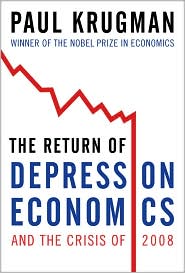 They can’t afford not to, and unless they’re smart enough to predict precisely when the 5% of disasters will take place (and few are), the collective result is some kind of periodic meltdown.

My own guess is that the answer is a set of regulations that slow things down. Something that throws just a little bit of sand in the gears of the global finance machine and prevents bubbles from growing quite as quickly as they otherwise might. Baker has proposed a small fee on financial transactions, for example, and that seems like the right kind of idea. I’ve long thought that very modest capital controls might also be a good idea, even for advanced economies. In the mortgage market, requiring even a small down payment plays the same role.

I think one misconception that’s become awfully popular recently is that the current meltdown is a “black swan” event, a perfect storm that happens only once a century or so. But I think Paul Krugman has made a persuasive case (in both the original edition of The Return of Depression Economics and the new one) that the kind of bubble related disaster we’re seeing now is simply a common feature of the modern, global, hyper-fast, hyper-unconstrained financial market. The only difference is that it’s mostly affected only small countries in the past couple of decades, and now it’s worked its way all the way up the food chain — and if we don’t introduce a little bit of institutional deliberation and constraint into the system, this won’t be the last time we see it. Given the limitations of human wetware, after all, there may be such a thing as a financial system that’s too efficient.