WAS KEYNES RIGHT?….Tyler Cowen is skeptical that a massive spending-driven stimulus plan will bring the economy back to life. For various reasons he discounts the usual Depression-era examples (the New Deal, Nazi rearmament, WWII) and then says: 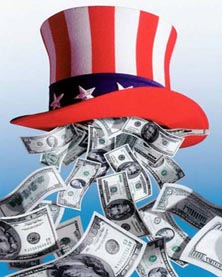 My point is simple: it is very hard to find examples of successful fiscal stimulus driving an economic recovery. Ever. This should be a sobering fact….The bottom line is this: we are being asked to believe that a big, trillion or even multi-trillion fiscal stimulus can boost the current macroeconomy. If you look at history, there isn’t good reason to believe that. Any single example, such as the Nazis, can be knocked down for lack of relevance or lack of correspondence to current conditions. Fair enough. But the burden of proof isn’t on the skeptics. It’s up to the advocates of the trillion dollar expenditure to come up with the convincing examples of a fiscal-led recovery. Right now we’re mostly at “It wasn’t really tried.” And then a mental retreat back into the notion that surely good public sector project opportunities are out there.

But do we need examples? I’d argue that we’re basically in terra incognita today. In the postwar era, we’ve virtually never seen an industrialized country, let alone the whole world, stuck in a liquidity trap before. The only example that comes to mind is Japan in the 90s, and their experience with fiscal stimulus was pretty mixed. Depending on your preconceptions, you could take the Japanese experience either as proof that massive stimulus doesn’t work or as evidence that not enough was done. And either way, it’s only one example, so it would hardly be proof enough for skeptics anyway.

That leaves us with theory, which suggests that government spending when monetary policy has lost traction helps to stimulate the economy. But even if doesn’t, my question to Tyler is this: what harm does it do to try? Assuming that stimulus spending is implemented even modestly well, it will, at a minimum, help out a bunch of people with continued employment and produce a bunch of infrastructure improvements that will enhance our future welfare. The downside is more debt, and I’m open to the argument that this is a bad thing to the extent that this debt is funded from overseas and produces further deterioration in our current account balance. But is that the argument against spending? Or is it something else?