BACK ON TRACKS….One of the big problems with our economy in recent years has been the massive growth of the FIRE sector — Finance, Insurance and Real Estate — at the expense of sectors that produce actual useful goods and services. Corporations have spent too much of their time engaged in M&A and stock buybacks instead of investing in new businesses, the savings glut from overseas flowed into the housing and finance market, and either through indolence or inability to attract attention, more traditional industries stagnated. In the current issue of the Washington Monthly, Phil Longman argues that this is roughly what’s happened to America’s freight railroads. Even though they’re cheap, green, and efficient compared to trucks, they’re short of track, hobbled by bottlenecks, and unable to haul a fraction of the freight they ought to:

Why don’t the railroads just build the new tracks, tunnels, switchyards, and other infrastructure they need? America’s major railroad companies are publicly traded companies answerable to often mindless, or predatory, financial Goliaths. While Wall Street was pouring the world’s savings into underwriting credit cards and sub-prime mortgages on overvalued tract houses, America’s railroads were pleading for the financing they needed to increase their capacity. And for the most part, the answer that came back from Wall Street was no, or worse. 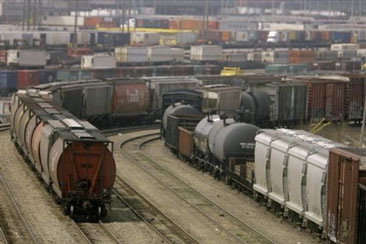 CSX, one of the nation’s largest railroads, spent much of last year trying to fight off two hedge funds intent on gaining enough control of the company to cut its spending on new track and equipment in order to maximize short-term profits.

….There are many examples around the country where a relatively tiny amount of public investment in rail infrastructure would bring enormous social and economic returns….Chicago, America’s rail capital, [] is visited by some 1,200 trains a day. Built in the nineteenth century by noncooperating private companies, lines coming from the East still have no or insufficient connections with those coming from the West. Consequently, thousands of containers on their way elsewhere must be unloaded each day, “rubber-wheeled” across the city’s crowded streets by truck, and reloaded onto other trains. It takes forty-eight hours for a container to travel five miles across Chicago, longer than it does to get there from New York. This entire problem could be fixed for just $1.5 billion, with benefits including not just faster shipping times and attendant economic development, but drastically reduced road traffic, energy use, and pollution.

As regular readers know, I have my doubts about pouring lots of money into long-haul passenger rail, high-speed or otherwise, but freight is another story entirely. I don’t need much convincing on this score. Trains can haul freight far more cheaply than trucks, both in money and carbon emissions, and an infrastructure overhaul that included electrification would make them more efficient yet. Longman suggests that an investment of $250 billion to $500 billion over the next 20 years would get 85% of all long-haul trucks off the nation’s highways, reduce the nation’s greenhouse gas emissions by 38% (and oil consumption by 22%), and thanks to logistical efficiencies, would also leave the our economy 13% larger by 2030 than it would otherwise be.

This is a program that would far outlast any short-term stimulus bill, of course, but that’s not a bad place to get the whole thing kick started. There are plenty of projects that could begin immediately, and if they’re successful then private funding would likely take over much of the burden in the out years. And for those of you who are more enthusiastic about passenger rail than I am, there’s another bonus: upgrading the freight infrastructure upgrades the passenger infrastructure at the same time. What’s not to like? For more, the whole piece is here.