BRINGING US TOGETHER….The LA Times reports on Barack Obama’s attempt to get wide bipartisan support for his fiscal stimulus package:

Despite Barack Obama’s decision to include as much as $100 billion in business tax breaks to his economic stimulus package to woo reluctant Republicans, obstacles to speedy, bipartisan passage remain.

….”I think he would like to have a large bipartisan vote in favor of this package. And he knows, even before we mentioned it, that the way to do that is obviously for it to have elements that are appealing to Republicans,” Senate Minority Leader Mitch McConnell (R-Ky.) said after a 90-minute meeting that Obama held with Democratic and Republican congressional leaders Monday. 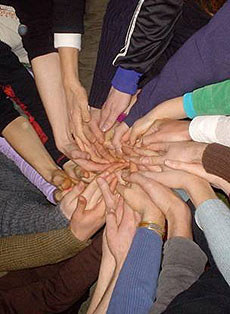 ….At the same time, McConnell and House Minority Leader John A. Boehner (R-Ohio) said they were not ready to endorse the overall stimulus proposal….House Minority Whip Eric Cantor (R-Va.), speaking after the closed-door meeting with Obama, said, “I think there would be a lot of support” for tax cuts among the GOP rank and file. But, he added, “we cannot afford to be burdening our children and our grandchildren with an extra trillion dollars in debt.”

The more I read about this, the more perplexed I get. What is Obama’s goal here? He’s already tossed in something like $300 billion in tax cuts to curry Republican favor, and his spending plans amount to about $200 billion per year for two years. That’s a big number, but it’s also only about 1-2% of GDP. It’s not that big a deal, and as a response to a massive recession it ought to be a no-brainer, even for Republicans.

But they’re playing the game anyway. By pretending to be skeptical, they’re hoping to wring yet more concessions out of Obama. Which is exactly what you’d expect them to do. It’s politics.

But what does Obama get out of this? He’s got the votes to pass his package already, and it’s hard to see what a bigger vote total buys him. In fact, considering what a crowd pleaser this bill is likely to be (jobs + tax cuts + aid to states = wild popularity), it’s not entirely clear why Obama is working so hard to get Republican votes. Wouldn’t it be better if the public saw this bill as a Democratic victory enacted over the meanspirited, neo-Hooverite obstructionism of a dying and bitter Republican Party? Besides, when push comes to shove, my guess is that plenty of Republicans will be clamoring to vote for this bill no matter what Obama does. Who wants to be left off the gravy train with elections coming up in a mere 22 months?

(And if, against all odds, the bill ends up being unpopular, or viewed as ineffective? Or the economy continues to suck no matter what? Well, all the Republican votes in the world still won’t help Obama. They’ll attack him viciously whether they voted for the bill or not, and he’ll own the economy, for good or ill, regardless.)

I guess this all comes down to whether you really believe Obama can change the tone in Washington. He seems to genuinely believe he can, and his actions on the stimulus bill make sense if you see them as the opening move in a long-term project to dial down the bitter partisanship of the past couple of decades. The press might eat this up (or might not, since they generally dismiss this kind of talk from Democrats), but I continue to wonder what makes Obama believe he can pull this off? There’s just no evidence from history to suggest that this can work, and no evidence from the recent history of the conservative movement to suggest that they’re planning to adopt a more conciliatory tone over the next few years.