CLAWBACK….Instead of nationalizing wobbly financial institutions, the Obama administration may be planning to set up a “bad bank” to buy up the toxic waste that’s currently clogging up bank balance sheets. The problem, as usual, is valuation: buying up bad assets doesn’t do any good unless you pay more than the current market price for them. After all, if $150 billion in junk is currently valued by the market at $15 billion, then the bank has a $135 billion loss on its books. Ouch. But if the feds buy it up at its market price, nothing has changed. The bank still has to book a $135 billion loss, and that loss makes it borderline insolvent and unable to loan out money.

Now, the argument the bank will give you is that the market has gone nuts: sure, mortgage defaults are up and that means mortgage-based assets have taken big losses. But “big” means maybe 30%, not 90%. Wait a few years for the panic to pass and heads to clear, and that junk will be worth $100 billion, not $15 million. That’s its real value.

So if the feds are going to buy up this stuff, this story goes, they should do it at the higher price. That helps keep banks solvent, and taxpayers will get their money back down the road. 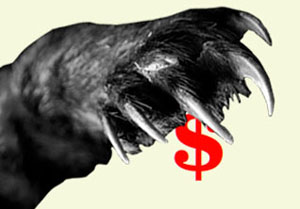 But Dean Baker says that if we’re going to do this, taxpayers need more than a wink and a promise that they’ll get back their investment. They need something with claws:

While the more obvious way to deal with the problem is to simply take over the bankrupt banks, and then put their junk in a bad bank, like with we did with the bankrupt thrifts in the 80s, there is a relatively easy way to limit the extent to which the bad bank is simply bank welfare.

We can just attach a clawback provision, under which the bank will be forced to make up any money that the bad bank loses on their junk, plus a penalty. For example, if Citibank sells $100 billion in junk, and the bad bank ends up selling it for $70 billion, then Citibank has to cover this $30 billion loss, plus a 20 percent penalty ($6 billion). This structure will both ensure that Citibank doesn’t run off with our money and also discourage banks from trying to mislead the bad bank about the true value of their junk.

This is not as clean as nationalization, and technically speaking, I don’t know how the clawback provision would show up on the bank’s books. Expert opinion welcomed on this point. But if the Obama economics team wants to avoid nationalization — and I don’t blame them for treating this as a last resort — this seems like the cleanest way to handle the asset side of the ledger.