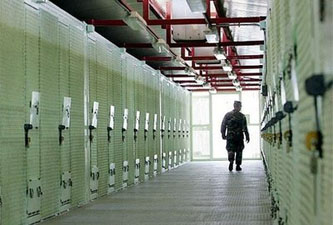 But experts say it is likely to take many months, perhaps as long as a year, to empty the prison that has drawn international criticism since it received its first prisoners seven years ago this week. One transition official said the new administration expected that it would take several months to transfer some of the remaining 248 prisoners to other countries, decide how to try suspects and deal with the many other legal challenges posed by closing the camp.

So far, Obama has been as good as his word on a wide variety of subjects, which means he deserves the benefit of the doubt here. Figuring out what to do with detainees at Guantanamo really is a tough problem, and suggesting that it will take several months to resolve is just a recognition of reality. Still, we’d all like something a little better than “trust us,” and Hilzoy suggests a couple of things that would help:

Luckily, the Obama administration can help us out here, by doing a couple of things that would clearly demonstrate good faith, and that the administration could do by fiat. First, it could suspend ongoing trials under the existing system of military commissions. That system is a joke. There is no reason to go on using it.

Second, it could accept the Uighurs into the United States. The Uighur detainees at Guantanamo have been found not to be enemy combatants. They have never taken up arms against the United States. The Uighur community in DC is prepared to help them out, as are religious communities in DC and Tallahassee. A judge has ordered them to be released into this country. There is no earthly reason not to do so; after holding them for seven years, it’s the least we can do.

Last month the Washington Post reported that several European countries have quietly made it known that once Obama takes office they’re willing to consider resettling some of the Guantanamo detainees who can’t be returned to their home countries. But one thing they want first is for the United States to take at least a few of the refugees itself as a show of goodwill that will help them sell the program to their own citizens. Apparently, though, the Bush White House has resisted the idea:

In interagency discussions, the State Department has argued that the Uighurs be brought to the United States to help persuade Europe to resettle other detainees. But a State Department official, who spoke on the condition of anonymity because of the sensitivity of the issue, said the departments of Homeland Security and Justice, as well as White House officials, considered resettlement in the United States a “red-line” issue.

Hopefully Obama can remove this red line, resettle the Uighurs, and get this program going.