PROSECUTING FOR TORTURE….Susan Crawford, head of military commissions, says charges can’t be brought against Mohammed al-Qahtani because she has determined that he was tortured during his interrogation. Matt Yglesias argues that this demonstrates why Barack Obama should be willing to open prosecutions against Bush administration officials for authorizing torture:

We have here a legal determination that a captive in US custody was tortured. And if he was tortured, that means someone tortured him. And torture is a crime….To me, it doesn’t make any sense to say that we’re going to have determinations that people were illegally tortured and yet we’re just not going to do anything about it. It’d be one thing to pardon people for this kind of thing as part of some larger legal or investigative strategy. But to just leave it hanging? 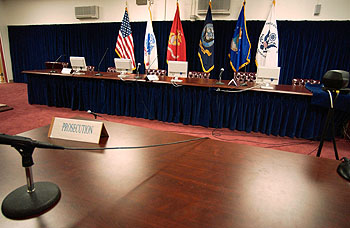 If Crawford thinks Qahtani can’t be prosecuted because he was tortured, then it stands to reason that there’s someone who can be prosecuted for the torturing.

I won’t pretend that I don’t have mixed views on this, but basically I agree. There’s one thing I’d be interested in seeing first, though, that I don’t think I’ve seen before: a sober legal analysis of whether torture prosecutions are likely to succeed. The fact that Qahtani’s case has been tainted is based on a certain set of legal principles, and Crawford almost certainly made the right ruling here. But there’s a whole different body of statutory law and evidentiary requirements that would come into play if a prosecutor were trying to prove beyond a reasonable doubt that a specific person was guilty of breaking U.S. law by ordering or carrying out the torture of Qahtani. That’s a much, much harder case to make.

I guess this is my worst case scenario: we end up bringing charges against Bush administration officials and then they get off. That would be tantamount to an official sanction for this stuff.

Now, obviously no prosecution is ever certain, and fear of failure is a poor reason for doing nothing. But I’d still like to know that there’s a decent chance that the legal case here is strong enough that convictions are at least likely. And I’d like to hear it from someone without a huge vested interest one way or the other. Without access to all the evidence this would be something of a whiteboard exercise, but still, has anyone with the appropriate background ever scoped this out?