FEDERER-NADAL…So I came down with some version of the creeping crud yesterday, which was a bummer. But there was a bright side: I kept waking up throughout the night, and whenever I did I turned on the TV and watched a few games of the Federer-Nadal match, inconveniently scheduled in the early California morning by our upside-down friends in Australia. The parts I saw were great tennis, and I don’t blame Federer a bit for tearing up at the end. 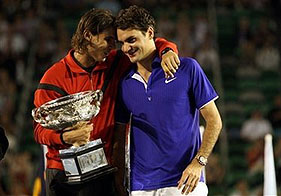 One of the stretches I was awake for was him blowing six consecutive break points at the end of the third set, any one of which would probably have won the match for him. Instead, he took home another loss. It was pretty excrutiating.

But I love this picture of the two of them after the match. When I first saw Nadal play a few years ago, he was a kid with stringy black hair, a sneer on his lips, always dressed in a muscle shirt, and hitting the absolute stuffing out of the ball. “This guy’s a thug!” I thought, a tennis-playing Terminator — but of course nothing could be further from the truth. As I quickly learned, Nadal may very well be the nicest, sweetest, most generous tennis machine on the planet. He’s almost too nice. It’s hard to convince people that this is one of the great sport rivalries of all time when they spend more time hugging each other than trash talking.

But still a nice picture. And hopefully Roger will get his 14th before much longer.