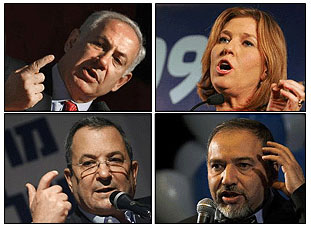 MIDDLE EAST UPDATE….It’s hard to have even a shred of hope left these days for some kind of solution to the Israeli-Palestine dispute, and the combination of Hamas’s rise following the Gaza war and Likud/Yisrael Beiteinu’s rise in yesterday’s Israeli election is just one more nail in the coffin. At this point, to have any kind of optimism at all, you would need to either have supernatural faith in Barack Obama’s negotiating powers or else be the world’s most fervent fan of “only Nixon can go to China” geopolitics. Aside from that, it’s difficult to see even the possibility of moving forward.

For more, check out Ezra Klein here and Stephen Walt here. But don’t bother if you’re hoping to be reassured. That’s just not in the cards right now.