VALUING THE TOXIC WASTE….Part of the Geithner bank bailout plan is apparently a scheme to partner up with the private sector to buy up the toxic assets on bank balance sheets. Will this work? John Hempton thinks it might. 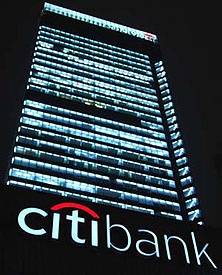 Right now, he says, a lot of these assets are modestly underpriced by the market and might well make decent investment opportunities — but only if the feds provide enough low-priced leverage to turn a decent investment into a great one:

So how are those assets really? Underpriced but hardly exciting….No — to be exciting you need to borrow against them. You need to be able to use leverage. Cheap leverage. Lots of leverage. And it can’t be margin loans or the like — because the asset prices are so volatile that your funding might go away.

So if the Geithner plan is to attract say one hundred and fifty billion of private risk capital and allow it permanent and secure access to say a trillion dollars of government money at a government rates then hey — I am in. (I would require the interest rate risk be matched too.)

It would be a pretty big gift from the government — as nobody — a good bank or a bad bank — can borrow at the same (extraordinarily low) rate as the US Treasury. But as a plan it might just work. And because 150 billion of real private spondulicks is at risk there are some pretty strong incentives for the private sector manager to get it right.

Basically, the idea here is that private investors are better at ferreting out the true value of the toxic waste, while the feds are the ones with the money. And I guess maybe that makes some sense. But you still have a pretty serious problem on your hands: banks don’t want to sell this stuff at honest prices. So even if you get both the valuation and the funding in place, how do you force banks to sell? And if you do force
them to sell, are you just driving them into insolvency?

It’s possible, I suppose, that this is the real point. Use private investors to figure out the valuation. Use the Fed’s balance sheet to provide funding. Use Geithner’s “stress test” to figure out which banks are bust, and force them to recognize the true value of their assets whether they sell them or not. Then let the private investors buy the junk and take over the remaining husk to be run as a nationalized bank.

But….if that’s the plan, why not just nationalize in the first place, skip the process of valuing the junk, and set it aside to be sold off in a few years? And perhaps that’s all this is: a piece of kabuki designed to get the private sector to make the determination that some of these banks are insolvent and have to be taken over. After all, if the private sector makes the valuation, no one can claim it was just some bureaucratic maneuver by a power-obsessed Obama administration.