Atrios pungently describes the main objection to the Geithner plan:

Aside from setting up an overly complicated plan to try to disguise what they’re really doing, the utility of the Geithner plan rests (or pretends to rest, not sure) on one fundamental premise: that Big Shitpile is greatly undervalued by “the market” 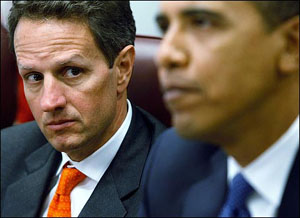 and that these mortgage securities really have expected revenues which justify higher prices. One could have reasonably believed this months ago, I have no idea why anyone would believe this now. The housing bubble burst, and now recession is here. There’s a lot of shit to be eaten, the question is who will eat it? Timmeh wants to make sure it’s not the banksters.

Although I’m less sure than Atrios that we should accept the market’s verdict on this stuff unquestioningly, he certainly might turn out to be right. But it’s worth noting that taxpayers are going to eat almost all of this shit no matter what happens. If Geithner’s plan fails, we eat it. If we nationalize the banks and become owners of all the toxic waste, we eat it. This financial crisis is going to cost the government a ton of money no matter what we do at this point.

Now, it’s true that if we nationalize we’d wipe out the shareholders of the bad banks. But although that’s the right thing to do, it’s also pretty small potatoes since stock prices have dropped so far that shareholders in bad banks have virtually no equity left at this point. (Sweden didn’t even bother trying to wipe out shareholders when they nationalized Nordbanken in 1992, for example. They just bought out the minority shareholders at the highly depressed market price.) What’s more, a lot of those shareholders are mutual funds and pension funds anyway. The amount of bankster wealth that would be wiped out in a nationalization is probably pretty small.

It’s not so much that I disagree with Atrios about this, just that I think he overstates the issue here. Nationalization would hurt bankers a little bit, and it would give taxpayers a bigger upside than the current plan. That’s good. But it would also be ungodly complex and create plenty of problems of its own. It’s worth avoiding if there’s another solution.

If Geithner’s plan fails because it turns out that the market price for all this toxic waste is really correct, then his stress tests will almost certainly show that Citigroup and Bank of America are insolvent. At that point, he’s out of options and it’s time to nationalize. Paul Krugman’s fear about Geithner’s plan is that “this will be the administration’s only shot,” but I think that’s wrong. In fact, far from making nationalization more difficult, its failure would make it both inevitable and broadly acceptable. All by itself, that’s probably a good reason to let Geithner give this his best shot.