Jason Zengerle points us to this allegedly prescient quote from 1999 in the New York Times:

“I think we will look back in 10 years’ time and say we should not have done this but we did because we forgot the lessons of the past, and that that which is true in the 1930’s is true in 2010,” said Senator Byron L. Dorgan, Democrat of North Dakota. “I wasn’t around during the 1930’s or the debate 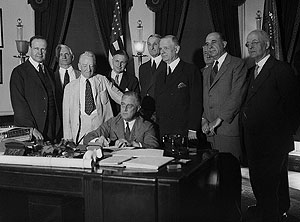 over Glass-Steagall. But I was here in the early 1980’s when it was decided to allow the expansion of savings and loans. We have now decided in the name of modernization to forget the lessons of the past, of safety and of soundness.”

I understand the outcry over passage of the Commodity Futures Modernization Act, which happened a year later in 2000.  Aside from opening the infamous “Enron loophole,” it also prevented the regulation of credit default swaps, something that might have come in handy over the past few years.

But despite a strong preconceived distaste for any legislation sponsored by Phil Gramm, I’m still a little mystified over the impact that repeal of Glass-Steagall is supposed to have had on our current financial meltdown.  Standalone investment banks have suffered every bit as much as the big conglomerates — maybe even more — and it’s not clear that combining commercial and investment banking under one roof had any effect one way or the other on the housing and credit bubble that drove the collapse.  AIG would have gotten into the CDS business with or without Glass-Steagall, and crappy lending standards were the order of the day at Countrywide and IndyMac just as much as they were at Citigroup and Bank of America.

On a broad note, I suppose you can argue that repeal of Glass-Steagall encouraged the growth of ever more too-big-to-fail financial institutions, and there might be something to that.  On the other hand, I don’t think Travelers Insurance has contributed anything to Citi’s troubles, so it’s not clear that crude size is really the culprit here.  There are big banks all over the world, not just here in the post-Glass-Steagall United States.

Maybe someone would like to take a crack at making the case for the malign role played by repeal of Glass-Steagall.  Even better, how about the case for reinstating it?  I’d certainly be interested in hearing it.